The engine, the power house and the heart of the motorcycle. Engines convert Chemical energy basically fuel like petrol, diesel etc into heat energy by combustion within the engine and that is converted to mechanical energy which is transmitted via the crank and transmission to the wheels. The by-products of the internal combustion include the energy produced which pushes down the piston, the exhaust gases and a lot of heat. As we continue to accelerate and run the bike on higher revs, more heat is generated. The heat generated from the engine needs to be kept at an optimum level to get best performance from it. Hence it is essential to maintain the engine around this temperature by different cooling methods for best performance.

Cooling is primarily is done by two major methods: 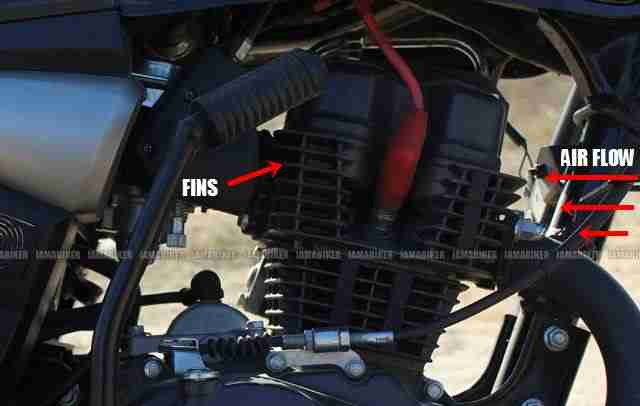 Air cooling can be classified into two variants:

As the name suggests, air is the cooling medium. Air that is blowing past the engine during transit is made use of to cool the engine. The cylinder is designed with fins to help in this process. Fins are a set of parallel slats to admit air. Basically these fins provide a larger surface area and also increase air turbulence around the engine to increase heat dissipation. Eg., Bajaj Pulsar 150, Hero Honda Karizma ZMA, Honda Unicorn etc.

This method of cooling is primarily used in vehicles where the engines have very little access to natural air flowing across the cooling fins. Fans are used to force air go past the cylinder block. This is the most economical way for cooling and is usually used in low displacement scooters like Honda Activa, Suzuki access, Bajaj Chetak, Lambretta etc.. 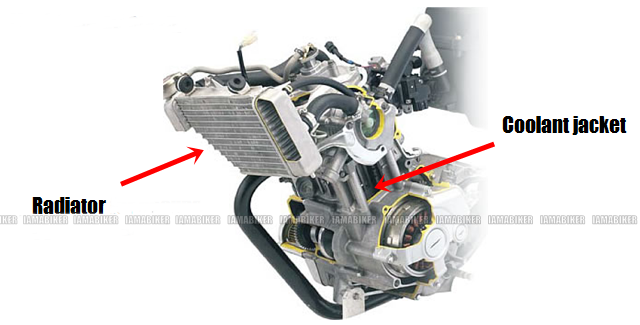 The engine performs better when its temperature remains optimum & constant. Water(liquid) cooling is a method which is used to keep the engine temperature constant. This a popular method used for cooling in high rpm engines & many large engine capacity bikes where performance is vital. The engine has a coolant jacket, where water mixed with anti rust & anti freeze compounds circulates and absorbs the heat generated. This mixture is passed to the radiator where the heat is exchanged & cooled down by on coming air. Brush less fans are added to the system to cool the water quickly when the temperature raises beyond optimum levels.

Now one would think that it would take forever to reach the optimal operational temperature due to the constant cooling right? To overcome this situation a thermostat is used to restrict the circulation of water until the optimum temperature is reached, this helps the engine gain optimum temperature quickly. This is done by the thermostat choking the circulation of water till the pre-designed temperature. An additional reservoir is connected to the radiator to store the vapour mixture which is released from the radiator cap when the temperature rises. Similarly the same is pulled back into the system when the water level drops in the radiator.

The other untold advantage is the management of the NVH (Noise,Vibration, Harshness), which is lowered due to the dampening of it by water. Though this system is complicated to build, its high efficiency makes it most desirable.

So then what are Oil cooled engines? 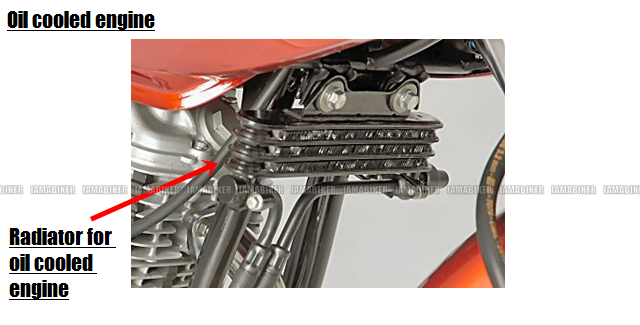