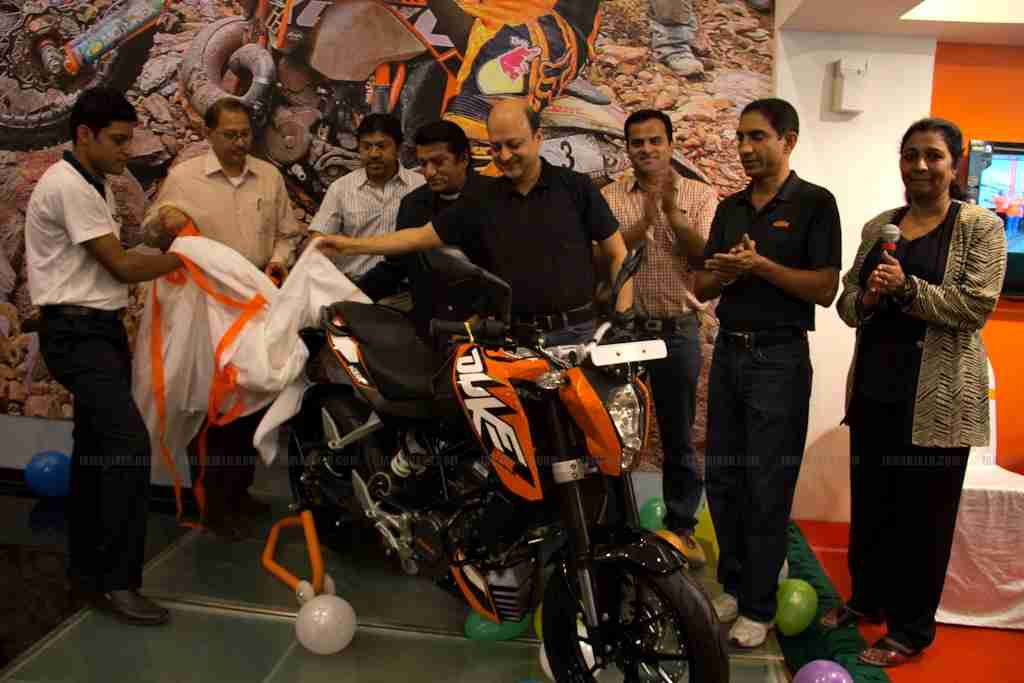 Its time to paint Bangalore Orange! The KTM Duke 200 deliveries begin today with the first 20 bikes being today delivered to customers at the Bangalore KTM showroom. The event was presided by Mr Amit Nandi Vice President Bajaj Auto, Mr. Pushpchand Chordia CEO of Khivraj Motors, Mr Gourav Rathore, Mr Prakhar Muktibodh and Mrs Jaya Chacko. Bangalore has received more than 300 bookings for the KTM Duke 200 ever since its official unveiling at Delhi. Mr Amit Nandi confirmed that the KTM powerparts would arrive within a week and the KTM merchandise within a month. No confirmation were given on the possibility of colours other than the orange. For more photographs of the launch event do visit the Bangalore KTM Duke 200 launch gallery.

Below is the official press release of the event.

KTM is Ready to Race in Bangalore. The KTM store in Bangalore starts delivery of KTM Duke 200 to the first 20 customers. Known for their legendary racing achievements, KTM is Europe’s second largest motorcycle manufacturer and dominates the off-road segment across the world. KTM debuts in India with its premium streetbike brand , the DUKE. The first offering from the KTM stable in India, the Duke 200 would be retailed through a dedicated KTM store (erstwhile Bajaj Probiking Store) at 100 ft road in Indiranagar, Bangalore along with KTM’s famous range of Accessories and Merchandise called KTM PowerWear and KTM PowerParts.

In a segment crowded with full-faired Japanese motorcycles, the KTM 200 Duke will be the only one sporting the naked streefighter styling that all KTM Dukes, like the Super Duke 990 and the Duke 690, are renowned for. The 200 Duke will be powered by a single cylinder, 200cc, liquid cooled, DOHC, four valve engine which will pump out a peak power of 25bhp and a maximum torque of 19 Nm. Like all KTM’s the 200 Duke has the best—in-class power to weight ratio of 184 Ps/ton thanks to high strength- low weight components of the highest quality. It features first in class features such as a Trellis Frame, Upside Down forks by European specialists WP, an aluminium swing arm, a multifunction cockpit and many more.

Packed with technology and features befitting motorcycles of far higher segments, the KTM 200 Duke has been launched at an extremely attractive introductory price of Rs. 1,19,021/- (ex-showroom, Bangalore).

Mr. Pushpchand Chordia CEO of Khivraj Motors said “We are delighted to bring the Duke 200 in Bangalore and are very positive about the prospects of KTM in the city. For the world class product we are geared up with the world class sales and service facilities. The state of art showroom is situated at the 100 ft road Indiranagar and the service center is also located at 100ft road Indiranagar near Domlur flyover .”

Mr. Amit Nandi, Vice President , Bajaj Auto, said “KTM is the only European brand in its segment in India. It has impeccable racing achievements for over 40 Years and will be available in its unique trademark orange colour. The KTM 200 Duke is meant for people who are young at heart and like to be different.”