The latest video that Suzuki released, we won’t call it a teaser video because it has revealed the entire new bike. That’s right. Suzuki has revealed its new V-Strom 1000 via a small video. The bike will be showcased for the public at the upcoming EICMA in November.

There are a lot of changes done to this bike. The most prominent one is that the oval headlight has given way to a new rectangular unit which is similar to what we saw in the new Suzuki Katana. Suzuki also used its DR Big-inspired red and white paint scheme which really looks cool.

We also spotted a new rectangular dash which seems to be a fully digital instrument cluster. We are expecting to see a lot more info on this unit which would help the riders. Apart from that, there’s a restyled/redesigned windshield at the front. We don’t know whether it’s adjustable or not.

As far as the engine is concerned, Suzuki will announce the details at the world premiere of the bike at EICMA. However, we do feel that the new engine will be Euro 5 compliant and would have relatively higher numbers than that of the current engine – which is a 1037cc, V-twin with 99 bhp and 103 Nm. 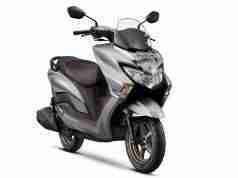