Apparently, a new Bajaj CT110 has started arriving at the dealerships and is yet to be officially launched. We aren’t sure whether all the dealerships across the country are getting this new commuter motorcycle or only a few ones.

There are a few changes that Bajaj has implemented in the new CT110. The biggest one is the engine. Bajaj has borrowed it from the Platina 110. It’s a 115cc, DTS-i engine which produces 8.6bhp and 9.81Nm. It is mated to a 4-speed gearbox. This engine and transmission setup will suit the CT110 perfectly as it’s a commuter motorcycle.

Other changes include new graphics, blacked-out engine, handlebar, and grab-rails, and a tinted visor. There is also a rubber tank pad, rubber front forks covers, and rubber covers for the mirror stalks. There will be three colours of the bike – Matte olive green (with yellow decals), Gloss ebony black (with blue decals) and Gloss flame red (with bright red decals).

The CT110 will be available in two variants, one with a kickstart that will be priced at Rs 37,997 and one with a self-start that will cost you Rs 44,352. There won’t be a disc brake variant. However, Bajaj is offering its anti-skid brakes (works like a combi-braking system). The new CT110 will sit in between the more affordable CT110 and slightly more expensive Platina 110.

Since the CT110 is already at the dealerships we are expecting it to be launched pretty soon. And when that happens, it will compete against the Hero HF Deluxe and TVS Sport. All these motorcycles are the best in the segment. It would be interesting to see which one takes a win.

(All prices are ex-showroom, Delhi). 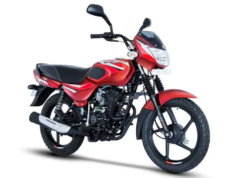