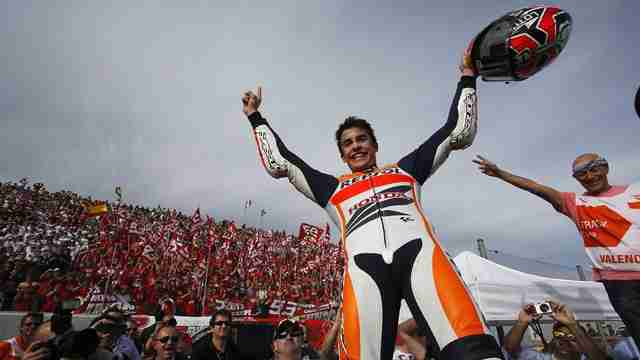 And that’s a wrap! The time when all of us, racing fans, say ah! now I would have to wait for 3-4 months to see the races start again and the wait is frustrating. Sunday marked a wrap of a sensational, exciting MotoGP season and not one but two championships had to be decided and the one who kept his nerves took away the championship.

In Moto3 there were three contenders, Maverick Vinales, Alex Rins and Louis Salom separated by 5 points and it meant that whoever wins the final race at Valencia, wins the championship. Louis Salom leading the points  table and behind him was Maverick Vinales with a 3 point gap and behind him was Alex Rins 5 points behind Salom. In the practice sessions all the three riders took turns to top the timesheets but it was Alex Rins took the pole with Salom and Vinales behind him in the front row. These Moto3 bikes or rather these KTM machines are so evenly matched that it was obvious that the title would not be decided at the race start but rather only on the last laps of it. When the lights went out all three contenders were leading but not far from them was Folger and behind him it was Jack Miller. With three riders taking turns in leading the race, Jonas Folger and Jack Miller never lost sight of the leading trio but they were also careful that they don’t be a factor in the outcome of the championship. At about half the length of the race the pressure of winning the championship probably got to Louis Salom and a momentary lapse of concentration made him crash out from third taking himself out of the equation for the championship. He did rejoin the race but too far back. Now there were two left, Vinales and Rins. And it was looking like a xerox copy of the Motegi race where first Salom crashed and soon after Rins also crashed on his own. But Rins kept his composure and kept going at it with Vinales leading most of the latter half of the race that is till the last lap, Rins wasn’t able to keep Vinales at bay and it came down to the last corner where Rins tried a brave move to outbrake Vinales only to lose the drive down the straight, going wide and lose the lead to Vinales. Folger who was trailing the duo all along made a move on Rins and took the second position. With Vinales taking the win he took the Moto3 2013 title as well.

Vinales took this title with just 3 wins in the whole season compared to Rins’ 6 wins and Salom’s 7 wins. But what he excelled in was the number of podiums (15 from 17 races) and in turn the consistency rewarded him. He moves to Moto2 now along with Louis Salom. Alex Rins will probably stay back in Moto3 to try to win the title first before moving up the classes.

Moto2 race was in a way a casual affair now that the title was already finalized with the newly crowned champion being Pol Espargaro. It was a matter of taking honors of who would win the final race of season and riders whose contracts haven’t been signed yet for next year, trying make a mark on the team and showing off their potential. It was Pol Espargaro who led all the sessions and also took the pole position for the race. Redding the runner up in points table who was still suffering from the injuries and qualified way back in the grid. The front row was completed by Simone Corsi and Jordi Torres. It was looking like Pol will run away with a victory with a lightening fast start of the race. But Pol probably got too carried away and binned it when he was leading the race with a comfortable lead of over 2 seconds. He was able to get back into the race but at the last place. Meanwhile it was Nico Terol who took the charge in the front with Simone Corsi behind. And behind Corsi it was Terol’s teammate Jordi Torres who eventually took over from Corsi and finished the race at second. At the finish line French rider Johan Zarco pipped Corsi off the podium via a video finish. Terol took his third win of the season in his home race which is also the home race for his team Aspar Racing. It was a first and second place for both the riders of Aspar team. Pol Espargaro finished the race in 29th place, not the way he would have wanted to celebrate and finish his season but nevertheless he is the Moto2 2013 world champion and will be moving towards MotoGP class joining Bradley Smith in Tech3 Monster Yamaha team.

With two of the championships decided it was the premiere classes turn to do so. The stipulation of the championship was a little less complex than what was there in Moto3. Marc Marquez who was leading the points table by 13 points from the defending champion Jorge Lorenzo just had to finish 4th or better in the race. And if Lorenzo had to keep championship he would obviously need to win the race and as well as need all the help he could get from other riders to keep Marquez from getting 4th or better. Jorge was on a mission this weekend he was in no mood to give the fight up easily. Any other rider would have taken it easy but not Marc Marquez he topped all the free practice sessions except for the last one. In the Qualifying session, Jorge, in only his first lap out, broke the lap record and showed his intentions but unfortunately due to an engine issue on his bike he had to come back into pits. Now it was Marquez’ turn to show his intentions and smashed the lap record even further. Nobody else was even close to his timing. Lorenzo couldn’t pull out the same timing on his second bike and had to settle for a second place on the grid with Marquez on pole. Front row was completed by Dani Pedrosa with an all Yamaha second row headed by Valentino Rossi. Although it was Marquez’ pole most noticeable was Lorenzo’s race pace, FP4 he pulled out 19 laps with low 1’31” which was ominous and he looked very comfortable in churning out fast laps in the race.

Come race day considering the form Marquez was in, for Lorenzo it wasn’t just trying to win the race it was more of making some thing happen so that Marquez upsets his own rhythm, makes a mistake and probably fall back in the grid positions. And he exactly tried to that when the lights went. He got a great start off the line and as usual Marquez with his not so great starts was swamped with riders like Dani and Valentino. First corner it was Lorenzo who led and Dani behind him. Third place Marquez’ with Rossi behind him. The fastest lap time by Marquez, in the qualifying, was low 1’30″s and if Lorenzo, Dani and Marquez were to run those kind of timing’s the other riders would have been left behind and probably out of the equation of causing some disruption. But the strategy that was employed by Lorenzo was fantastic; he slowed the pace down yet leading the race to the lap timings of 1’32″s and made the whole pack slower so that other riders can also keep up and in turn probably cause a lapse in concentration by Marquez. Lorenzo would occasionally let Dani go in front only to take back the lead in the next corner, this way he was able to control the pace. Rossi and Bautista indeed were not far behind the leading trio of Lorenzo, Dani and Marquez. This went on till the 10th lap but Lorenzo’s plan did not seem to be working as Rossi, who looked most capable of causing the upset, wasn’t able to surpass Bautista who was probably following Honda’s strategy of shielding Marquez from other Yamahas. Dani overtook Lorenzo once more and Lorenzo in the wake of taking charge made a dangerous move on Dani, had a contact and caused both of them to go wide. Marquez was in front momentarily and Lorenzo was able to get in the front with Marquez following him closely and Dani at third. By this time it was probably evident to Lorenzo that the other riders won’t be a factor in the race and hence winning the race would be most advantageous and hoping that Marquez crashes out some how (just like Mugello this year where Marquez crashed out of the race on his own). The lap timings dropped to 1’31″s for the first time in the race and from then it was nigh impossible to stop Lorenzo. What was most noticeable was Marquez’ temperament in the race, all the ruckus happening around him, he kept his cool and rode his own race and didn’t falter with all overtaking happening in front of him. If it was any other race, the way Marquez would have tried to make some moves of his own but not this time. Even when Lorenzo broke away from the group he kept his cool and didn’t try to win the race but his eyes were on the bigger prize i.e. the championship. He even let Dani Pedrosa get ahead of him in the latter part of the race and settled for third place. And that’s exactly the stuff of the champions, not losing one’s cool, sticking to the plan and taking home the championship. Lorenzo eventually won the race comfortably and Marquez cruised to third and eventually clinching the title and in-turn becoming the Youngest MotoGP Champion ever. He broke the record, held by Freddie Spencer by 58 days and also taking the championship in his rookie season just like Kenny Roberts Sr did way back in 1978.

With a bike arguably the best in the MotoGP, Marquez is set to rule the premiere class unless an equally talent rider comes along the ranks or if Yamaha can give Lorenzo the bike he needs to beat the Hondas. 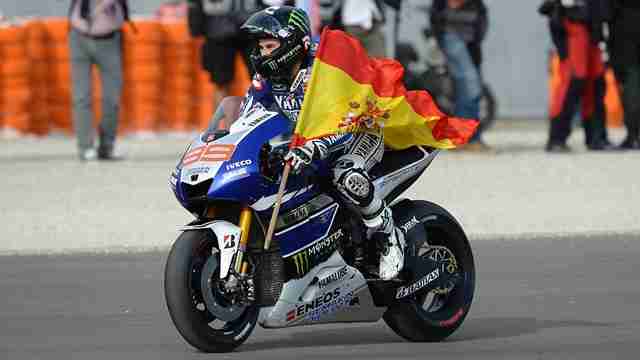 MotoGP is not over entirely, the post season testing is about to start with Honda and Ducati testing their 2014 bikes on Monday and Yamaha testing theirs on Tuesday. There has been some movement of riders that are worth watching out for; First is Cal Crutchlow’s move to factory Ducati and will be making a debut on it on Monday. Secondly Nicky Hayden will be swinging his leg over the Production Honda RCV for the open class. Colin Edwards and Aleix Espargaro will be taking on the Yamaha M1 leased engine hosted on a custom chassis. Also Pol Espargaro will be making his debut on Yamaha M1 in his new team Tech3 Monster Yamaha.

Among the riders that are staying in their teams the most notable change is with Valentino Rossi’s team where he is parting ways from his long time crew chief, Jeremy Burgess, 14 years to be exact and joins hand with Silvano Galbusera for 2014. Rossi is trying whatever he can to get back in contention with the leading trio and thinks may be the influx of fresh ideas from a new crew chief might just give him those extra tenths to fight with the Hondas and his teammate. Very well hope and wish that he does become competitive before he decides to hang up his boots from MotoGP.

Next year promises to be even better than this year, with the production racers, leased engines and most importantly fresh talent on the circuit its going to be even more nail biting and intense. Till then ciao!