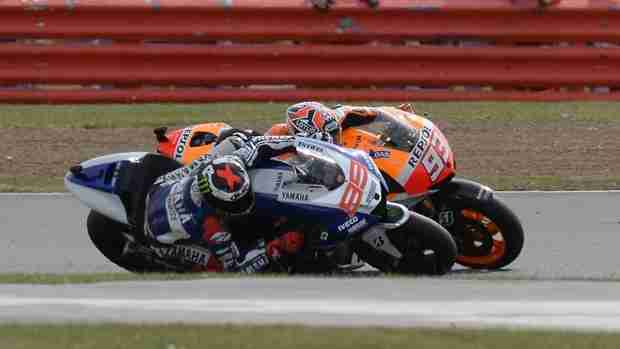 It was MotoGP’s 200th race since it switched to the new generation 4-stroke engines in 2007, and it was race that will spoken about for a long time. Jerez 2004, Laguna Seca 2008, Catalunya 2009, are some races that we refer to while discussing spectacular race wins and there is an addition to such wins and that is Silverstone 2013.

The weekend started with Lorenzo and Marquez alternately recording fastest times in the four free practice sessions. Qualifying was nothing short of spectacle as well. Lorenzo in just his 4th out lap smashed the lap record, that was set by Casey Stoner, by more than half a second and it was looking unlikely that anybody would be able to match. But how can it be when Marquez is around and right away he bettered Lorenzo’s time. Lorenzo wasn’t going to heed defeat as yet and he once more smashed the record just set by Marquez only to be again bettered by Marquez. Qualifying was just about these two guys pulling out fast laps and everybody else was just to fill up the grid. Valentino Rossi continued his below par performance in Q2 and could only manage 6th place along with Dani Pedrosa and Stefan Bradl. Home boy Cal Crutchlow was also fast and grabbed the front row. 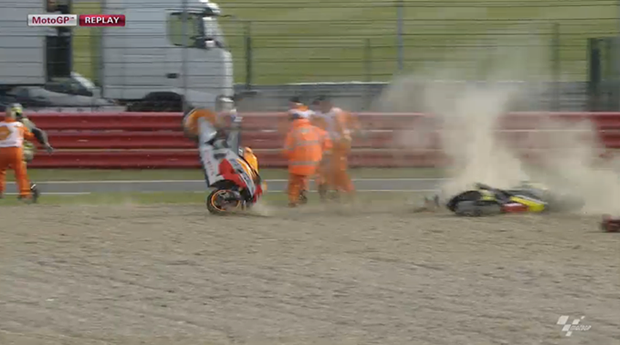 Sunday WUP had yet a surprise, a rather shocking one, when Marquez and Crutchlow had fast crashes at the same point. While Crutchlow escaped without injuries, Marquez was not so lucky and dislocated his shoulder. Marquez was taken to the medical centre where they popped his shoulder back in. He was later deemed fit for the race but doubt arose if the injured shoulder will impact his performance in the race or not.

When the lights went out it was Lorenzo who got the holeshot and led the first corner with Marquez tailing him. Pocket rocket Dani Pedrosa had a bad start which was unusual and was relegated to 6th. Rossi got a great start moving up places to third. While the front row riders had taken up harder compound of tyres, Bradl and Bautista had chosen the softer compound which meant that they could run at a faster pace than others at least for the first part of the race. Both easily over took Rossi and also Dani Pedrosa made up places to third and Rossi was now 6th with Bradl and Bautista in the front.

Marquez’ shoulder didn’t seem to be bothering him at all and was tailing Lorenzo all race long. Soon Dani Pedrosa joined the duo, just like last race at Brno. Marquez, Lorenzo and Dani were running a different league at all and no one would have put his money on any one rider. Till the last lap Marquez was just hovering around Lorenzo looking for an opening and he did get an opening and took full advantage of it and lunged to the front. It looked like Marquez will once again steal a hard earned victory, but not this time. Lorenzo wasn’t going to give up and was right behind Marquez and when Marquez left a small opening Lorenzo made the most of Yamaha’s strength i.e. maintaining its corner speed while turning and led the corner. Now it was just a drag to the finish line and Lorenzo was able to ward off Marquez to it. It was a spectacular win for the defending champion at a time where Hondas especially Marquez was racking up victories as the Yamaha is clearly inferior to the Hondas. Lorenzo with this win has stopped the young Spaniard’s run of victories and also closed up a little gap in the points table. It was his warrior spirit that prevailed and made this win possible. Meanwhile Rossi had successfully fended off Bautista attacks and made it at 4th to the finish line, another 4th in the race for him. Crutchlow finished at 7th, a lot lower that he would have expected to, in his home race. Marquez still leads the points table from Dani Pedrosa by 30 points and 39 points from Jorge Lorenzo, looking most likely to win the title. Not to forget he is going to do it in his rookie year. 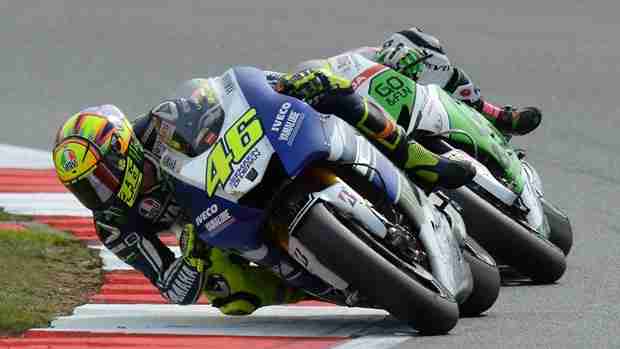 Moto2 race wasn’t a disappointment for the home boy Scott Redding as he took a comprehensive win and also extending his lead considerably over Pol Espargaro who had a very disappointing race finishing 8th. Scott led the race right from the start, he was relegated to second a couple of times but eventually won the race. Behind him Takaaki Nakagami and Thomas Luthi fought till the finish line for the podium places and eventually Nakagami got the better of Luthi and took second place. Redding now sits at the top of the points table with a very comfortable lead of 38 points, it is going to be hard for Pol to surpass him and take the title now that Redding’s future is also secured with a seat in MotoGP with Gresini Production racer next year and also an option to move up next year to ride the satellite Honda, which is currently ridden by Bautista, in 2015. 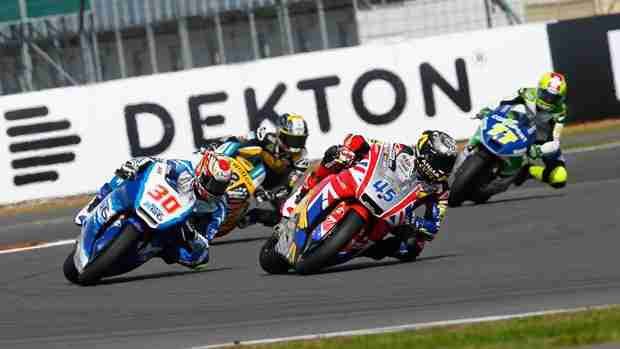 Moto3 race was yet again breathtaking with 4 riders, Louis Salom, Alex Rins, Maverick Vinales and Alex Marquez, put up a show with no time to breathe. Overtaking at will all race long riders took turns leading the race and at the end it was Louis Salom who once again timed his overtaking move to perfection and took the win with Rins marginally crossing the line behind him. Alex Marquez took third place and the biggest loser in terms of points is Vinales who finished 4th, Vinales now trails the points leader, Louis Salom, by 26 points and right on his heels is Alex Rins with 7 points gap. It is going to be intriguing battle for the championship with such close gap between the top three. 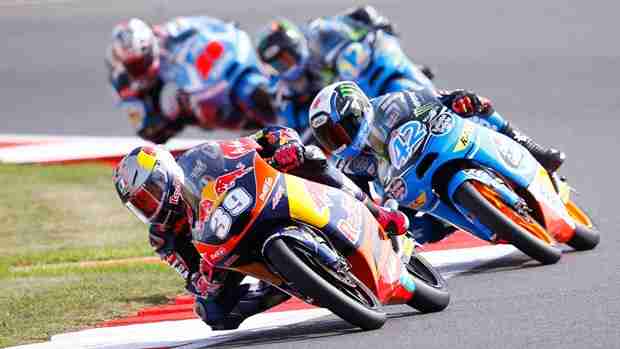 Next up it is Rossi’s backyard, literally, at Republic of San Marino, Misano. A track where Rossi traditionally unveils his new helmet design, it will interesting to see what his design would be this time. Also Rossi’s half brother, Luca Marini is going to wild card in Moto3 and going by his brilliant performance in Italian championships, it is going to be very interesting how he performs at this level. So a lot of things to look forward to in Misano apart from the championship terms.