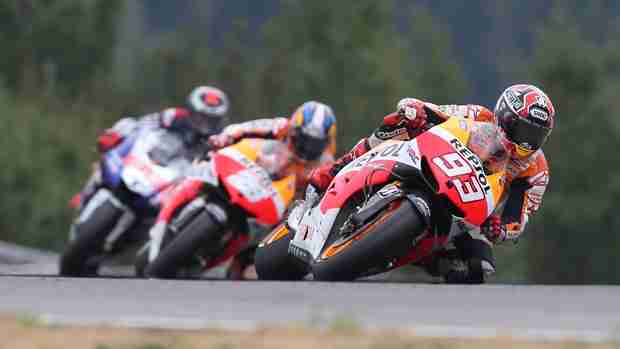 The race weekend at Brno has made one thing very clear, very soon MotoGP races are going to be about who is going to take the remaining podium positions after Marc Marquez does a a perfect race. The MotoGP rookie continues to break records, and became the first rider to win five races in his dÃ©but season —four of which he has taken at consecutive rounds, in a feat not seen since 2008.

Reigning world champion Lorenzo made an incredible start from fifth on the grid, out dragging the entire front row to take the hole-shot into turn one. Although initially able to build a gap of just over a second, he soon had rivals Marc Marquez and Dani Pedrosa close behind in pursuit. Starting third on the grid, Marquez was engaged in a three-way dogfight for the lead with teammate Dani Pedrosa and Yamaha Factory Racing’s Jorge Lorenzo, with Marquez setting a new Circuit Record Lap time of 1’56.135 on lap three in his efforts to push to the front of the pack. Marquez managed the race-winning overtake on Lorenzo on lap nineteen and despite late pressure from Pedrosa, crossed the finish line 0.313 seconds ahead of his teammate with Lorenzo taking third a further 1.9 seconds behind. Rossi’s race proved to be a very similar experience to Indianapolis last weekend. Holding seventh from the line he was fairly quickly able to pass Bradley Smith for sixth as the first laps passed. Satellite Yamaha rider Cal Crutchlow was soon to fall in front, promoting Rossi to fifth as he began a race long battle with Alvaro Bautista. The nine-time world champion would prove to be the victor, making the crucial pass stick as the last lap wound down, taking fourth position at the line. Power Electronics Aspar’s Aleix Espargaro emerged victorious from a battle with NGM Mobile Forward Racing’s Colin Edwards to claim top CRT honours, the Spanish rider finishing in tenth place just one second ahead of the American.

Today’s weather conditions were cool and overcast with a peak track temperature of 24°C — ten degrees cooler than in qualifying yesterday. Drops of rain fell during the race, raising the possibility of a flag-to-flag race but ultimately the rain didn’t affect the outcome of the event and the overall race time was the fastest ever recorded at the Brno circuit. The cool conditions resulted in all riders selecting the softer option rear slicks, while three riders also opted for the soft compound front slick with the other twenty-two riders on the hard compound front. Tyre degradation during the race was consistent, with the lap times among the leading pack dropping around half a second from the beginning to the end of the twenty-two lap contest.

“I’m so happy! Before we came here I didn’t expected win, because Jorge and Valentino had both tested at Brno recently and Dani is always so fast here and won the race last year. It is a completely different track to those at which we have raced before, and these 25 points feel different to Indianapolis! This was a very hard fought win and I enjoyed myself a lot. The battle with Jorge was really good and we are pleased with the victory. Thanks to all the team!”

“I am very happy with the result, generally speaking, because after all the problems with my injury and the doubts we’ve had at the last few races, we took a big step forward with my mental preparation today. We were more ready to win here, despite not being 100%. Unfortunately, our strategy was not the best. I had problems overtaking throughout the race, because I couldn’t brake late and was always the third rider in the trio at the front. I think that I made my final attack one lap too late. If I had passed Jorge one lap earlier, maybe I would have been in with a chance of the victory. In any case, we had the right attitude of attacking until the end and gaining ground on Marc. I just needed another lap in order to catch him! We will try again next time. I want to thank the team for the great job that they did this weekend.”

“I think I did my best start in all my career in MotoGP, I took four positions and in the first laps I was really quick. Finally I couldn’t keep the same distance to second place so little by little they caught me. Especially under braking and on the straights they were faster than me so I couldn’t do much more. I was a little nervous when the white flag came out because it’s really dangerous to race with slick tyres on little spots of rain but luckily it didn’t come so we could finish in dry conditions. Finally when Dani overtook me it was too far to fight back, I didn’t have the rear tyre or physical condition after pushing a lot all the race. The Championship is not lost yet but it’s now getting very difficult. We need just a few tenths to win the race so we have to pray for that at Silverstone!”

“Today was better than Indy, especially because my disadvantage to the top is half. I wanted to do better; we have to try to do better. The first three guys are impressive, very strong; I want to stay closer to them. Unfortunately I was ten seconds back, another fourth place but I want to be closer so we have to work. We tried to improve this type of setting in the last two races but it looks like it’s not ideal. Also today I suffered a bit too much at the beginning of the race. We won’t give up and we will try next week to make a better job.”

“Once again I had the chance to finish ahead of Rossi, but I ended up just 0.077 behind him at the line. However, I am happy because we had a good race and ran a fast pace that was better than in practice. I had a lot more confidence in the bike today. It was a nice battle with Rossi and maybe he just had a little more than I did at the end. We’re going in the right direction, continuing with what we started at Laguna Seca two races ago; this is very important. Last year we didn’t have a great feeling at Brno, but this year we went well which confirms that things are getting better. We hope to continue like this, because that way I can carry on enjoying myself alongside the Team”

“The sixth position is not that bad considering the whole weekend but I really wanted to be faster. We could not improve the bike as I would like because I had many problems with the edge grip on right and left sides of the rear tyre. I had to fight to pick up the bike to get a little bit of drive out of the corner to accelerate. I tried many things to save the rear tyre during the race but here, with these long corners, you have to carry the corner speed and, at the beginning, I was behind Rossi and Smith and I saw they could carry more corner speed. We wanted to stay with Rossi and Bautista but I was not capable to keep that speed. Let’s move to Silverstone to keep working”.

“Obviously I am disappointed after qualifying in pole position but I had to push really hard to try and get away from Bautista and Rossi. Lorenzo made an incredible start and his first lap was really strong and that put us all under pressure. I was happy with my pace and I felt comfortable but then I made a mistake. I was trying to get myself back in contention for the podium and I lost the front. I am sure I could have finished fourth but I got back on a damaged bike and set a fast and consistent pace and I never gave up. It is not the best preparation for my home race at Silverstone but I go there knowing I have the pace and that I can be challenging at the front. I am really excited for Silverstone and I know the support from the British fans will be incredible, so hopefully I can give them something to cheer about.”

“For what we could expect today, I’m pretty pleased because I was able to have a consistent pace, and I managed to get under 1’58” at the end of the race. I did the whole race in front of Nicky; I pushed my hardest, and I didn’t make many mistakes. I’m happy with my performance, but of course the gap is too much; 35 seconds is really a lot.”

“Once again, the guys in front were quite a bit quicker than us. Dovi got away from me in the beginning, but I was able to bring him back and race with him a bit. He was right in front of me at the end, but there was really nowhere to put in a clean pass without making it touchy. He rode a great race and covered all the lines the last couple laps. The bike was definitely better in the warm-up, and then in the race, I felt the best over the bumps that I have all weekend. I did the sighting lap on the hard front tyre, but I switched to the soft on the grid. It was a bit of a gamble, but it turned out to be the right choice.”