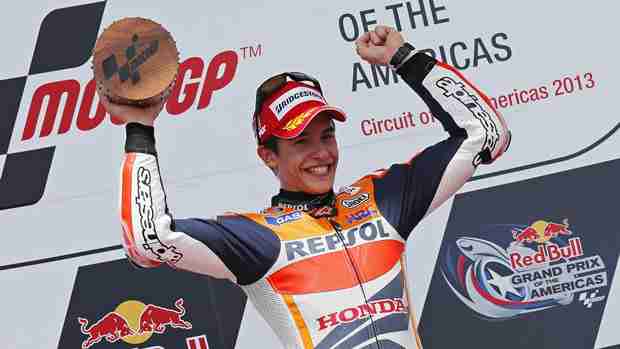 The 2013 MotoGP Austin race weekend was one of many firsts and one that saw records shatter with ever so ease. Race day was a special day in a lot of ways. Lets start with the venue. MotoGP added the Austin track this year replacing the usual Estoril Portugal track. A beautiful, long track (5.2kms) with the longest straight amongst the MotoGP tracks, around 1.2 kms with a spectacular Double S curve. The track is the home track for MotoGP rider Colin Edwards and also the legend Kevin Schwantz who was the key person in bringing MotoGP to Austin, Texas and also designing the track. But due to some legal battle he was not allowed to be there for the race weekend.

The inaugural race was the Moto3 race which had virtually two races. The race had to be red flagged due to a crash involving the Dutch rider Jasper Iwema who high-sided and landed badly on his neck and lost consciousness. Every time red flagged is waived during race I dread for the worst but thankfully he escaped without any serious injuries, he was airlifted to the hospital and was diagnosed with a concussion.

The race had completed 11 full laps of designated 18 before it was red flagged. By this time the riders who started the race from the front row were leading the race; Alex Rins, Luis Salom and Maverick Vinales. Rins was leading with Vinales at second place having a considerable gap from Salom. When the race was red flagged, premature celebrations started at the Rins’ camp even Vinales congratulating him for the win thinking the race was over. But the rulebook says that the race should complete at least two-thirds of its total laps (12 laps in this scenario) for the race to be declared over and in this case 11 full laps were completed and race was one lap short. 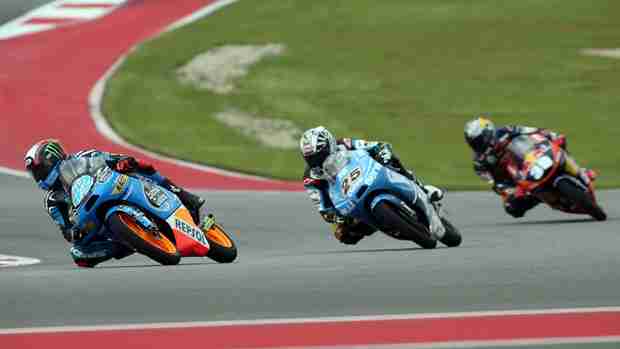 The race was restarted with just 5 laps. Rins who was leading the race was at the biggest disadvantage and Louis Salom who won the Qatar race had the most to gain as he probably wouldn’t have caught up with the race leaders in the actual race, now as the race was being restarted with their respective position in the stopped race, Salom could try for a win. The 5 lap race was nothing short of excitement. Every rider wanted to take advantage of this situation. The 5 lap dash meant that we saw some frantic overtakes and maneuvers by all riders, one that resulted in the final race standings was the move on Alex Rins by Luis Salom for a try at the number one spot; he overtook Rins on the last corner but he couldn’t hold his line as he was carrying too much speed and went wide. Rins crossed the finish line first followed by Vinales and finally Salom who looked very dejected that he couldn’t win the race. This was Alex Rins’s first ever win in Moto3 and Austin was only his second pole as well after Qatar. This rider has to be taken seriously, we will be watching him closely as he graduates to higher classes in the coming years. It was a good day for Indian Mahindra Moto3 team as well with Miguel Olivera finishing at 5th position and his team mate Efren Vazquez finishing within points. One name which made a lot of news ways last year was Romani Fenati, but he has not been able to his grips on this years races so far. He surprised a lot of people last year but this year somehow he has not been able to maintain that hype. He didn’t finish the restarted race and was 12th in the red-flagged one. Nicolo Antonelli is one more talented rider who needs to step up and get back in the action.

While Moto3 was the first win for Alex Rins, Moto2 was no different for Nico Terol, riding his Aspar Mapfre Moto2 bike. The last ever 125cc two stroke champion was in pristine form and took victory convincingly. This race was also the first ever pole position for Scott Redding but in the race he suffered with grip issues and wasn’t able to capitalize on the pole position. Pol Espargaro or “Polycio” (written on his leathers) crashed early in the race losing his riding boot in the process. Takaki Nakagami also crashed out of the race. Polycio’s teammate, Titto Rabat, rode a fantastic race with gutsy moves and took the second place followed by Scott Redding’s teammate, Mika Kallio. Such was the grip issues for Scott Redding that at the end of race his bike was left with just 2 mm of rubber on the rear tyre. Pol’s crash didn’t sting him too much in terms of points as he is just 6 points behind Redding and it is just the second race of the season. There was one more famous name missing from the starting grid and that was Thomas Luthi who still hasn’t recovered from his right elbow and shoulder injury which prevented him to race in Qatar as well. He did try to get on the bike in practice sessions but pain was too much for him to continue. 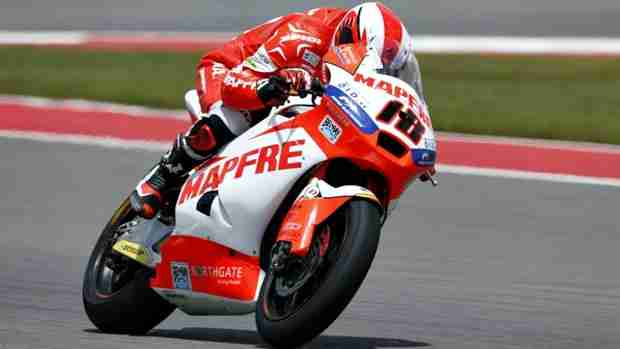 With Moto2’s first win for Terol, MotoGP premier class also had its firsts and records broken this weekend. One of the questions (and answers) in our last race report came out to be true. Marc Marquez, the young Spaniard has created history, broke the record which was intact since 1982, by being the youngest rider to win a premier class race. Previously this record was held by Freddie Spencer. Marquez was 20 years and 63 days old on Sunday when he took the spectacular win. Although he had plenty of time to break this record (163 more days and races till Aragon), Marquez wasn’t going to wait that long. He was already fastest in pre-season testing and led almost every session. He had the chance and he went for it and took the win in style.

What’s more important is that he beat his teammate, Dani Pedrosa, in the process. Dani Pedrosa as we expected was back to his flying ways this weekend and we topped the FP3 and warm-up session and looked like he could take the win but race day was the Prodigy’s. Defending champion Jorge Lorenzo on the Yamaha was clearly at some disadvantage compared to the power of the Hondas. In the qualifying he missed his last dash for a better grid position due to an electronic malfunction in his bike. He started the race from third in the front row with Dani Pedrosa and Marc Marquez ahead. 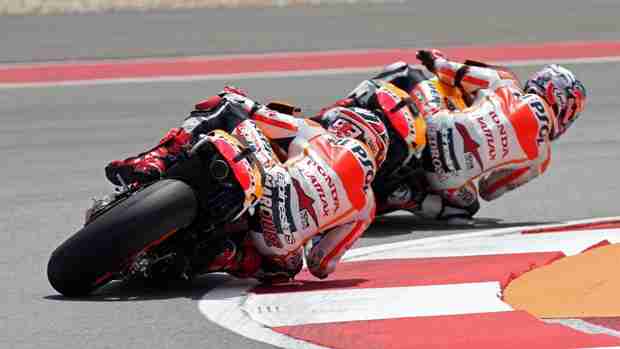 When the lights went off Marquez didn’t have a great start and he had to do some catching up before tailing Dani Pedrosa for most part of the race. Lorenzo did what he could do best and that was trying to keep up with the two leading Hondas. Marquez chose a different tyre, the harder compound, for the race than everybody else except fellow Honda rider Stefan Bradl. The track temperatures had been higher than the other sessions and they felt harder compound would be well suited for the latter part of the race and indeed after following Dani around for good amount of time, Marquez finally made the move and took the lead. Compared to Marquez’ Moto2 overtakes back in 2012 this wasn’t a hasty, immature one but a very calculated, clean overtake. This tells how much and how fast Marquez is learning and maturing.

Lorenzo rode a lonely but consistent race at third place not so far from the Hondas. This just wasn’t the day for the champion and he did the best he could and finished the race in the best possible way by being the top Factory Yamaha bike behind two faster Hondas. Speaking about other Factory Yamaha bike which is ridden by none other than Valentino, this was a weekend which he would like to forget as soon as possible. The Doctor was nowhere near competitive the whole weekend. He had qualified 8th fastest on the grid and he had to run a defensive race due to an issue with his bike’s front brake which had chipped off a chunk of disc causing vibrations while braking. He finished 6th in the race behind Cal Crutchlow and Stefan Bradl. Crutchlow rode an exceptional race considering the fact that he had no previous experience of the track, Tech3 Yamaha had not visited the track in the pre-season testing due to financial constraints. Finishing 4th before both Stefan Bradl and Valentino Rossi, who had tested here before, and also finishing not so far away from Lorenzo was a great achievement for him.

There was one achievement, that was overshadowed by Marquez’ win, for Lorenzo this was his 100th podium overall. An impressive feat which went under the radar.

Aleix Espargaro on the Aprilia continues to impress by finishing ahead of the two Satellite bikes, Bradley Smith on the Tech3 Yamaha and Ben Spies on the Ducati GP13. Colin Edwards retired from the race and looks like they haven’t sorted out the bike yet after switching from Suter BMW combination from last year to an FTR Kawasaki bike.

The race itself wasn’t that exciting but the anticipation of the record being broken by a talented rookie in just his second race was enough to be hooked on to the race till the finish. Add to that the congratulation Marquez got from The Doctor and his own teammate Dani was a treat to watch. The new generation has arrived and the future’s looking bright.

So this race weekend was something very special you can check out the individual riders quotes and the race timings here. All the winners were first time winners in their respective classes. Also all of them were Spanish, goes to show the domination of Spanish in MotoGP and by the looks of it the domination will continue in future as well. Next up MotoGP goes back to its origins and starting its Europe rounds with Jerez round.

PS: WILD SPECULATION: Marquez is currently tied at the top spot with 41 points along with Jorge Lorenzo. Could this be a sign of Marquez winning a championship in his first attempt?