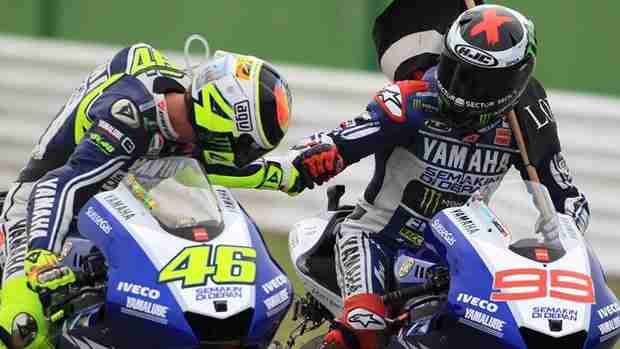 The MotoGP Misano round might not have been the race we wanted to see, but it still thrilled and proved that although that the championship seems pretty much sealed in the hands of Mark Marquez, the reigning world champion is not going to keep quite about it and accept his fate. Jorge Lorenzo proved in pure dominance that this fight is not over and he will not accept defeat until the fat lady sings. Taking the hole shot he had a over a second lead from Pedrosa and Marquez behind him by the first lap and kept adding to that gap and took the win in true Lorenzo style, with almost mirrored laps times through out the race and responding almost immediately to any charge from behind.

Everybody expected Rossi to fight for the podium and he did too for a while before he started having braking issues that led to errors slowing him down. The real battles in yesterdays race was for second spot between Marquez and Pedrosa and the between Bradl and Crutchlow for 5th. Marquez and Dani were absolutely all over each other with Marquez in is his usual dramatic style making every approach on Dani looking like a accident waiting to happen. He did make a mistake early on, going wide and letting Rossi pass, but was quick to recover. Dani too fought for most of the race and did to Marquez what Marquez did to Rossi, but could not keep Marquez behind for long. This has been an issue we have seen with Dani even last year, by the last few laps he almost seems to accept his position and does not push harder.

Stefan Bradl probably rode his most patient and calculated race yet, he tailed Crutchlow all through the race and overtook him in the last lap to make it past the British rider over the finish line. Aleix Espargaro had a ride through penalty due to a jump start and if not for that probably would have been battling with the Ducati’s. Even after the ride through he made an awesome comeback by still finishing as the second best CRT rider behind Edwards.

Marc Marquez still holds a commanding 34 point lead over the championship. Both Pedrosa and Lorenzo have the same number of points and must still fancy their chances but with just 5 races left in the championship it is going to be very difficult.

“Luckily we improved the bike a lot in warm up, especially in braking so we improved the lap time and the pace quite a bit. I was convinced to follow my strategy of the last couple of races which was to try to break away and finally I could do it. The first two laps I had a big advantage so I had to keep pushing to maintain a distance because they never gave up and wanted to catch me. I’m happy, we recovered five points and we are closer to Marc. I need to be constant and try to win races and stay focused.”

“We’ve taken another 20 World Championship points today and, considering how the race went, I think that is a good reward! At the start of the race I knew that I had to be careful, but I made two mistakes and lost a lot of time with the second of those. Maybe I was lacking a little experience; it’s my rookie season and it is normal to make a few errors. I also didn’t feel completely comfortable with a full fuel tank; from the midway point onwards I felt a lot better. To finish second is a great result, even though Lorenzo has gained five points on us, we are an extra four ahead of Dani [Pedrosa]. We are happy and have a lot of motivation to keep fighting hard at Aragon!”

“I gave my all in the race today. I rode as well as I can ride, putting everything into every lap and trying to take every corner perfectly. Overall, this hasn’t been our weekend, generally speaking, because I had a lot of grip problems with the rear tyre on every day of the GP. In the race today it was even more noticeable, so I couldn’t have done things any better.”

“All the weekend our performance was quite good, I stayed with the top three and I raised my level, especially in qualifying, I could push stronger with the new tyres and make the first row. The expectation for the race was very high, after the start the top guys were very fast but my fastest lap was close to theirs. Unfortunately after some laps I was in trouble in braking and entering corners. I was struggling in hard braking and made some mistakes going wide and step-by-step they pulled away. I made a small mistake on turn seven and lost two seconds and by then already I had too much disadvantage. It’s a pity because we wanted to try for the podium here in Italy in front of all the fans in Misano. We hope the weather remains good for tomorrow as we have to try some new parts.”

“Definitely it was the best day of the weekend for us. We improved the bike from Friday to Saturday but today the Team made a great job. I suffered a big crash on Friday and they had to work even harder to give me a competitive bike for the race. In the beginning of the race I was not so confident because, in the warm up lap, I was not sure about the rear tyre performance. But after few laps I could set my pace easily and I followed Cal for the whole race. He was a good reference for me and I was able to see where I was stronger than him so in the last lap I made my maneuver in turn seven. I had fun and I am happy now because I made a strong race after such a tough week end”.

“It is a shame that I lost fifth place on the last lap but it has been a very difficult weekend and I am happy to come away with this result. The top six is not what I am aiming for right now but I had no confidence with the bike all weekend, and it was important to get a strong finish. It was a very hard race because Stefan just sat on my back wheel from the first lap to the end and unfortunately he managed to find a way to pass me in the lasts corners. I tried my best to take fifth back but it wasn’t meant to be, but I think the whole of the Monster Yamaha Tech 3 Team showed a lot of fighting qualities this weekend. My crew have never given up and they have worked really hard trying to build up my confidence and I am grateful for their support.”

“We expected a different result than this because we were competitive during practice and in the warm-up this morning but during the race I was struggling to get the bike turning into the corners, which is strange because we didn’t touch the setting. Our pace was slower than practice and that’s not normal so it’s important we understand why this happened to make sure it doesn’t happen again. It’s a shame because we had the potential today to fight for fifth or even fourth place. This is racing and now we have to put the result behind us and concentrate on the next race in Spain. I am disappointed for the team because it’s their home race. We were on the podium here last year and I would have loved to give them another great result.”

“Obviously, we can’t be satisfied with the result. I made a mistake on the start. Espargaro was in front of me and, unfortunately, I was distracted when he jumped the start. I lost many positions and some seconds in the early going because there were many of us trying to pass each other in the slow corners, so the first few laps were pretty challenging. Then I started to find my rhythm; I passed Nicky and thought I could do a faster pace, but I didn’t have a great feeling with the front end of my Desmosedici. It’s a shame because I had hoped to be able to fight for positions a bit closer to the front.”

“It’s been a tough weekend and things certainly didn’t get any easier today. When Espargaro jumped the start, I saw him out of the corner of my eye and delayed a little bit. I lost a few places on the run to turn one but was able to make up a couple of positions pretty quickly. Then it was a really difficult race for me, as it was very hard to change directions and stop. I was racing with Dovi, and at the end of the back straight away, I lost the rear and ran off the track. The last few laps were pretty lonely after that. I made two mistakes one at the start, one in the race–and they both hurt me. The pace hasn’t been very good all week, and it’s a shame because the team is working so hard.”

“After the first few laps, I thought I could stay with Dovi and Nicky because I wasn’t so far back, but then I began having problems with the brake. I went long in the Quercia turn and that may have caused me to lose my focus a bit, as I lost a few metres; if I’d wanted to stay with them, I couldn’t have made any mistakes. In the end though, we gathered important data that we hope to be able to take advantage of. The good work we did over the weekend, as well as our tenth place, aren’t bad, but there’s still a lot of work to do. Thanks to the whole team for this great experience. It was nice to do so many races together, but now I must return to my test-rider work. Good luck.”