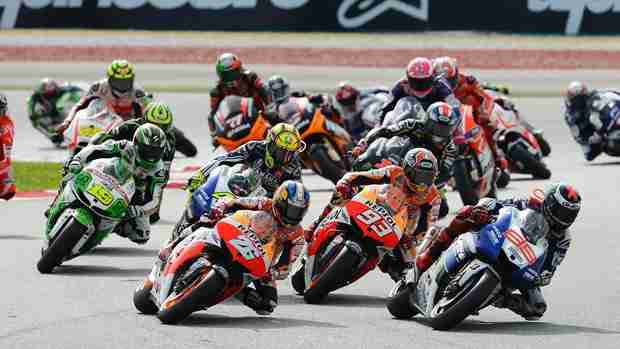 If there was a man that looked strong all weekend, it was Dani Pedrosa. The second row start was probably the only low in his weekend but come race day Pedrosa gave us a proper show of how to ride at the front and take control of a race. There has been a big significant change in the race etiquette ever since Marc Marquez has come into the MotoGP scene. From being almost by the rulebook and one with a very clean image, the addition of Marc Marquez and his controlled, uncontrolled riding style coupled with his aggressive passes, raw talent and arguably the best bike on the grid, Marc Marquez has surely gotten under every riders skin and today’s race was one that showed nobody was going to sit back and take it any more. Top on that list was Jorge Lorenzo, the battle between these two in the first half of the race kept everyone at the edge of their seat’s. There was even contact at one point of time and it was Lorenzo that got in on the inside line and stood Marquez up. Marquez eventually did get past Lorenzo and made it stick. He is probably the only rider who is not effected, bogged down or probably even cares about tyre wear and the way he can catch up on lost time is almost magical. So it was sure that he would give Pedrosa a good chase, and he did too. But Pedrosa reacted almost instantly and upped his pace and kept a lead of over one second during this chase and kept on adding to that till the chequered flag. 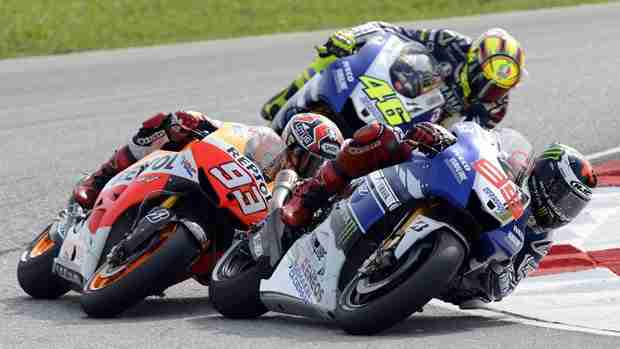 The Yamaha boys clearly had some issues today. Once the Honda’s got past there was nothing they could do. Rossi expected a podium and surely Lorenzo wanted to win in his own dominant style from the front after a good start, but the Honda’s just were so much better today. Even behind this group it was the Honda of Alvaro Bautista that triumphed over the Yamaha that was ridden by Cal Crutchlow. Bradl if not for his crash during final free practise probably would have been amongst these two. Nicky Hayden had to retire early as his Ducati broke down. Power Electronics Aspar’s Aleix Espargaro was once again the best of the CRT riders, taking ninth place. With three rounds remaining, Marquez extends his points lead over Jorge Lorenzo to forty-three points, while Pedrosa’s third victory of the season sees him remain third overall, though he reduces the gap to Lorenzo to eleven points. 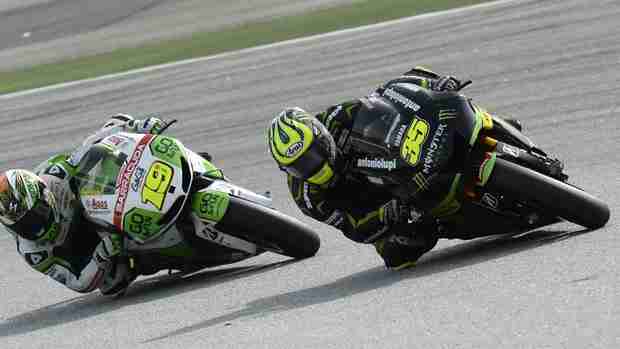 “I am very happy with this win, as it is very special. My level of riding today was very good and the victory comes after a difficult week —in which I was laid up in bed and could hardly move. To come here and win is fantastic, so thanks to all my team! It is a pity about what happened in Aragon, because we had the pace and the same chance of the win as we did here. However, we can’t keep looking back; we need to continue on and try to carry our form into the final races.”

“These twenty points are very important and I’m really happy with how the race went today. I had a nice, fun battle with Lorenzo, but at the same time I could see that Dani was opening up a gap. When I finally managed to overtake Jorge and make the pass stick, I tried to reduce the distance that Dani had put between us. However, I saw that it was too risky to do so. From that moment on, I decided to focus on keeping Lorenzo at bay, because the goal here was to finish the race ahead of him. We did what we came here to do, so we are very happy!”

“We were much slower than the others today, especially after three or four laps. I tried to open a gap at the beginning like always but there was +0 on the board after a couple of laps. When Dani passed I tried to stay with him and also then again when Marc passed me. I tried to pass him some more times to make him nervous but it was impossible, he was much stronger today so we couldn’t do much more. To win the championship is almost impossible but I would like to finish second in the championship and win as many races as possible.”

“Today was half and half for me, for sure we improved and made another step, improving the setting of the bike and I was able to be very close to Jorge. It looks like today our competitors had an advantage here; they were able to keep a better rhythm than us. Starting from second I hoped to arrive on the podium but I knew the top three guys were very strong. At the beginning of the race I lost some time as I had a problem with the front brakes. We continue to work and push and fight to be in with the top three.”

“I made a good start and that allowed me to get away with the front group for a few laps but then I had a moment when I couldn’t get the front brake lever fully on and I ran wide. It took me a couple of laps to get confident with the brakes again and I lost touch. Maybe in the battle with Valentino I overheated the brakes. It was a shame but I fought my way back to Crutchlow and then gritted my teeth to beat him in a fight to the end. Another important top five finish for me, the team, who have done a great job again, and the sponsors.”

“It was a difficult race and I am very pleased to be in the top six, though it would have been better to have won that fight with Alvaro. That’s about my level at the moment and we knew this is not an easy track for Yamaha. I lost quite a bit of time fighting with Alvaro because I was looking to push on and maybe chase Valentino. But at the start I couldn’t stop the bike with the soft front tyre and I had a few moments. And I was also struggling with a lack of rear grip and that made it quite a difficult race. It was a good battle with Alvaro and it was a pity he just beat me but at the of end of the day he is on a package very close to the one that won the race today. I’m still satisfied with sixth but I am not so happy with the gap to Dani at the front. I am confident though we will be stronger at Phillip Island.”

“To be honest today was a good way to end a very positive weekend. During the last three days we improved in every single session, we made progress with the setting of the bike and me finishing in 7th position is obviously a pleasant fact for my Championship standing. Today the track conditions were very tricky and with the higher temperatures the behaviour of the bike was very different to what I experienced during the whole weekend and it took me awhile to adjust my riding style. But my second half of the race was quite strong and I am pleased with this. Furthermore we improved my feeling on full fuel load where I normally struggled a lot and also finishing the race still seeing Cal and Alvaro was a very positive feeling. So altogether I’m truly satisfied with this event and I will fly to Australia full of confidence and looking forward to the race next week.”

“I had a good start and was trying to stay with Smith, but I was very close to the limit and made a small mistake in Turn 14, where I closed the front. I went off-track and lost nearly ten seconds. Then it took at least seven corners for the normal grip on the right side of the tyre to come back, and I’m not sure why. We can’t be happy because our lap times were pretty disappointing. At the moment, it’s very hard for us; the other bikes have different characteristics and we aren’t able to close on them.”

“The race went pretty much the same as the rest of the weekend here and unfortunately we just haven’t been competitive enough. We have struggled to get confident here and the only real consolation is that next week we go to my home race at Phillip Island, a circuit I have won many races at in the past.”

“It’s a real shame because yesterday before FP4, the team made a good step with the bike. I didn’t ride well in qualifying, but this morning I was able to go faster than I had all weekend and had a pretty decent pace. In the race, I started eleventh but was able to move up a few spots and was having the best race I’ve had in a while. I was pulling away from Dovi pretty well and had just closed onto the back of Bradley. He was a little faster than I was in a few places, but I was better in some other spots. Just as I tipped it into the last corner, I heard a strange noise. I was hoping it was something on his bike, but when I opened the gas it was clear it was me. We need to let the engineers check out the engine to see what the problem was. It’s just a shame for me and the team to start the three-week trip this way.”