The Royal Enfield Continental GT 650 and Interceptor 650 have been around for a while now. Those who own the motorcycles love them and we must say that Royal Enfield did a pretty good job with the development of the 650 twins. Now, the time to update these motorcycles has come with the 2021 model coming out in the upcoming months.

A leaked image has revealed the colours that the 2021 models will be launched with. When it comes to the Interceptor 650, the current model is available in six colours — Glitter & Dust, Silver Spectre, Baker Express, Mark Three, Ravishing Red, and Orange Crush.

According to the leaked image, only Orange Crush, Glitter & Dust, and Baker Express will be continued while Royal Enfield has added four new colour options to the palette. The four new colours are — Ravishing Black, Gray Goose, Ventura Blue, and Royal Red. 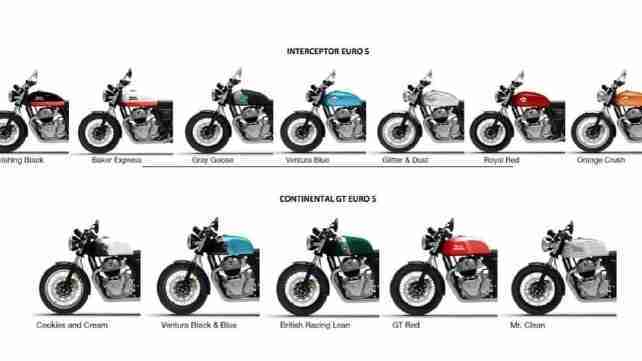 A few of these new colours are notable. The GT Red is exactly the same shade as the older Royal Enfield Continental GT 535 was. The British Racing Green harks back to the golden era of British Motorsport and Royal Enfield’s glorious history as an English brand. The Gray Goose shade does look very attractive and so does Ravishing Black.

The 2021 Royal Enfield Interceptor 650 and Continental GT 650 will be powered by the same engine found in the current models. It is an air and oil-cooled, 649cc, parallel-twin engine with a maximum power output of 47bhp and a peak torque output of 52 Nm. A 6-speed gearbox drives the rear wheel.

A telescopic fork up front and twin shocks at the rear take care of suspension duties. Braking is handled by a single 320mm disc up front and a 240mm disc at the rear. The 2021 Interceptor 650 and Continental GT 650 are expected to be launched in the first half of 2021.