A smaller displacement Honda Africa Twin is in the making, according to reports. Honda might launch a mid-weight version of the Africa Twin, that would slot in the 800cc adventure motorcycle segment.

Rumours regarding the development of such a motorcycle came about a while ago, but died down. Now though, reports from reliable media outlets have brought credibility to the rumours.

The Honda Africa Twin is one of the best ADV motorcycles in the market right now. It comes loaded to the brim with features and makes for a compelling buy. Honda has been doing exceptionally well in motorsport events like the Dakar Rally and that gives its ADV motorcycles more credibility too.

Buyers in the ADV segment know that learnings and technology from motorsport will somehow find its way to road-going bikes eventually. However, the most popular and best-selling ADVs slot into the mid-weight segment and have a displacement in and around the 800cc mark.

Hence, when one thinks of ADVs, motorcycles like the Triumph Tiger 900, KTM 790 Adventure, Yamaha Tenere 700, etc spring to mind. However, the Honda Africa Twin currently slots into the premium, flagship segment, with its 1,100cc parallel-twin engine.

Market conditions show sharp growth in the sales of mid-weight ADV bikes, and it makes sense for Honda to want a slice of the sales pie. In the American market, Honda retails the NC750X adventure motorcycle, but it isn’t very popular and its dismal sales figures show the same. However, the NC750 will form the base for the upcoming ADV bike.

The platform to support the upcoming mid-weight Africa Twin will be an evolution of the one underpinning the Honda NC750. The 750cc, parallel-twin engine will be bored-out to around 790cc and it might even come with Honda’s signature DCT transmission.

No other details of the motorcycle are available at the moment. The new motorcycle will be launched later this year, probably at EICMA in November or possibly even earlier. Upon being launched however, it will step into a highly-competitive segment, going against the likes of the KTM 790 Adventure, Triumph Tiger 900, Yamaha Tenere 700, BMW F850GS, etc. 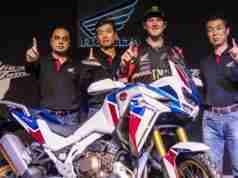