Visitors to the Honda Collection Hall will get more than they bargained for if they tour the Japanese manufacturer’s historic collection of motorcycles and cars this weekend at the Motegi circuit. Carefully positioned amongst a number of Honda race bikes of yesterday are their respective Yamaha rival machines. Max Biaggi’s 2002 YZR-M1 can be found alongside Valentino Rossi’s 2002 Honda RC211V and those who look a little further will find other rare exotica including Phil Read’s 1968 RD05A, Kenny Roberts’ 1983 YZR500, John Kocinski’s 1990 YZR250 and Wayne Rainey’s 1993 YZR-M1. Permission for this unique placement of Yamaha’s machines within the collection was kindly given by Honda to honour Yamaha’s 50th anniversary of Grand Prix racing. 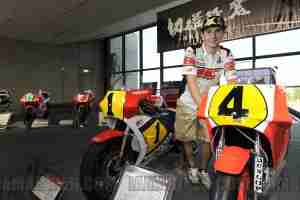 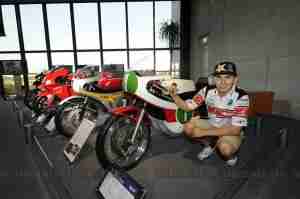 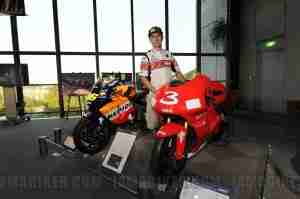 The first day of a MotoGP week is usually a fairly quiet affair with riders attending press conferences and engaging in media inter views. Today was more unusual with a Yamaha ‘flavour’ popping up in some unexpected areas! Hungry race fans in search of food at Motegi will now be able to sample an authentic taste of Italy over the race weekend. Yamaha Factory Racing’s chef sent three traditional Italian recipes to the ‘Grappa’ restaurant at the circuit and the Japanese chef was quick to whip up a taste of La Dolce Vita. The chef dropped in to the restaurant this afternoon to demonstrate how to make the pasta ‘all’arrabbiata’, sharing the Italian style of cooking with his Japanese counterpart. Situated in the middle of the public area, the restaurant will welcome over a thousand people over the race event, many sampling the traditional Italian food for the first time.

Following the normal Sunday morning warm up the Motegi circuit will come alive with a historic soundtrack as selected Yamaha race bikes from the manufacturer’s illustrious racing history will take to the track. The special parade will feature five historical bikes ridden by iconic former Japanese racers.