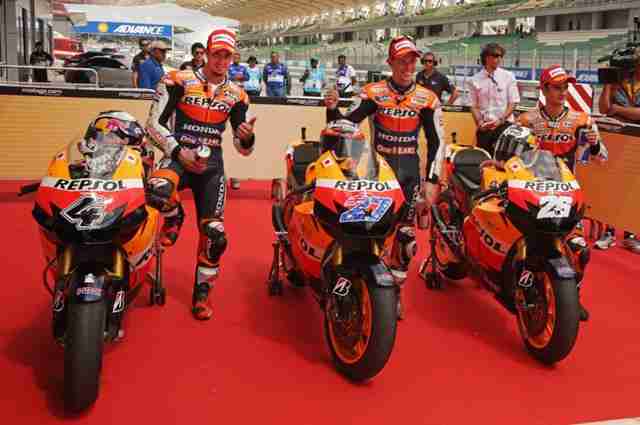 Qualifying for the Grand Prix of Malaysia proved to be a tough challenge for Yamaha Factory Racing rider Ben Spies today at the Sepang International Circuit. The Texan’s injuries sustained in Australia continue to hamper his abilities to ride to the limit. As a result Spies crashed in both the morning practice and afternoon qualifying session, finally taking 16th place on the grid for tomorrow’s race.

Dani Pedrosa was the main protagonist of the second consecutive day of practice at the Sepang circuit after dominating the last free practice session that took place this morning and achieve the pole position for the Malaysian Grand Prix in the qualifying. The Repsol rider will start from the first position of the grid in a first row monopolized by the Repsol Honda Team riders, where Casey Stoner will be in second place and Andrea Dovizioso third. After the good start he had yesterday, Pedrosa kept setting the pace in this second-to-last round of the World Championship. In the third free session, the Repsol rider was the only one able to lap under two minutes and two seconds, two tenths ahead of Marco Simoncelli, who was second. Behind the Italian, Andrea Dovizioso, signed the third fastest time and Casey Stoner was fourth.

Riding in sweltering conditions, Nicky Hayden and Valentino Rossi both made solid progress on Day 2 at the Malaysian Grand Prix, qualifying on the second and third rows, respectively. For the American, sixth-best equals his best qualifying position of the season, last week at Phillip Island.

Valentino Rossi suffered a fall near the end of the session, when he was in the process of lowering his time, but after returning to the garage and switching bikes, he put in a strong final effort to make the third row of the grid.

In the timed session, a crash suffered by Dani Pedrosa in the first minutes of the practice seemed that it might stop the Repsol rider, who saw how the front-end of his bike blocked in the last corner of the circuit, a long left-hand corner before reaching the main straight. In that moment Andrea Dovizioso was leading the times sheets, but by mid session Pedrosa had returned to the track with his second bike and, after improving his times steadily, took the lead of the classification.

In the following lap, the Spaniard broke again the two minutes and two seconds barrier, although fifteen minutes before the end he saw Dovizioso trying to fight for the fastest time with him. Only a few laps later, Stoner joined the battle for the pole position, showing the great level of the Repsol Honda Team riders in Sepang.

The World Champion took the first place, but five minutes from the end, Pedrosa improved his register by another three tenths and stopped the clock in a definitive 2 minutes, 1 second and 462 thousandths, that gave him his second pole position of the season. In the last two minutes, Stoner was able to lap in the same times as Pedrosa, with almost identical register, but finished 29 thousandths behind his team mate, a time that will allow him to start in front of Andrea Dovizioso, who tomorrow will complete the last row.

Katsuyuki Nakasuga made a step forward today, Jorge’s replacement rider getting more familiar with his bike and team as the weekend progresses. Nakasuga-san wrapped up qualifying 2.6 seconds from pole, over two seconds closer to the fastest rider than yesterday.  He will start tomorrow’s race from 17th on the grid, behind his temporary team mate Spies.

Here is a look at the results: