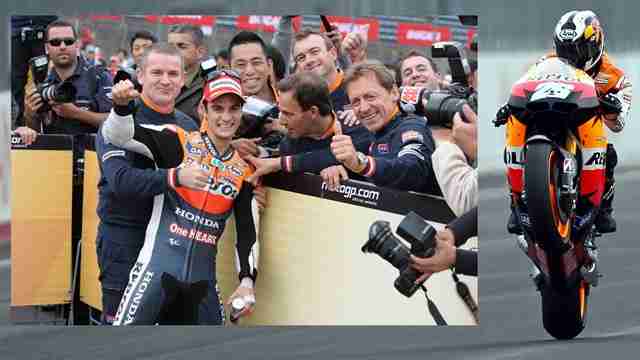 The Repsol Honda Team rider, Dani Pedrosa, added today to his track record a new victory in the premiere category, the 400th of Spanish Motorcycling history and his third win of the season. It was a chaotic race, where his team mates Stoner and Dovizioso were out of the fight for victory, the first due to a problem with the brakes and the second due to a ‘ride through’ penalty after taking the start a bit early. Despite that, Stoner finished on the podium –third– and Dovizioso was fifth.

Reigning World Champion Jorge Lorenzo delivered yet another flawless performance of perfect riding to take second on the podium today for the Grand Prix of Japan. The race itself proved to be an action packed affair with many dramas, several riders receiving ride through penalties and Championship leader Casey Stoner riding off the track, resulting in the loss of several places. After the incident, Lorenzo tucked in to follow promoted race leader Dani Pedrosa, maintaining second to the flag with lap after lap of inch perfect lines. The result reduces his gap to Stoner to 40 points with three races remaining of the season. 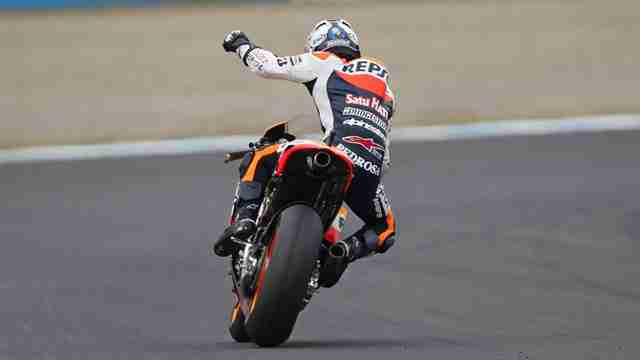 Having battled with food poisoning the entire weekend Ben Spies had recovered physically and started today’s race in excellent form. Quick off the line he was tucked in behind team mate Jorge Lorenzo going into turn three on the first lap when he was hit from behind by fallen rider Valentino Rossi. Japanese fans were then treated to the famous Spies comeback routine as the American carved his way back through the field to an incredible sixth place, consistently delivering 1’46 second lap times, equivalent to the two front runners. The result puts him on 156 points in fifth, 17 clear of Rossi chasing behind as they head to Phillip Island in two weeks for the next round.

After a weekend of continuously improving performances in the practice sessions, followed by a strong morning warm-up, Valentino Rossi wasn’t ultimately able to take advantage of the good work carried out on the GP11.1. The Italian crashed just a couple of corners into the race after he and Jorge Lorenzo made contact, which sent him into Ben Spies. When sliding in the gravel, he suffered a hard blow to a finger on his left hand. X-rays carried out after he returned to the garage didn’t reveal any fractures. Nicky Hayden was fighting with Alvaro Bautista for fourth place and lapping at a very competitive pace when he entered Turn 1 too quickly and went off the track, losing several positions. He finished the race in seventh place.

Dani Pedrosa’s relationship with Japan is undoubtedly very special. He has won races here both in 125c.c. and 250c.c., and in this very same track he suffered last year the injure that ended his chances to fight for the MotoGP title. Today, three days after turning 26, he received a present in the form of the victory in the premiere category, after a good start from fourth position, that placed him second in the first corner, at Casey Stoner’s wheel and in front of Andrea Dovizioso. The Australian soon took some advantage, setting a very fast pace from the second lap, the same lap where Dovizioso overtook Pedrosa.

Nevertheless, the situation changed dramatically when in the fourth lap, a strong jolt on the front of Casey Stoner’s Honda left him temporarily without brakes, forcing him to have an off. In the manoeuvre to go back on track he fell to the seventh place, leaving Dovizioso in front. A lead that only lasted one lap, because in the next he had to do the ‘ride-through’ penalty for getting ahead of the start.

From that moment on, Pedrosa found free track to achieve a new victory, the first of a Honda rider in his own circuit since 2004. The Spaniard of the Repsol Honda Team stood the initial pressure from Jorge Lorenzo to increase the pace a bit later, set the fastest lap of the race in the eleventh lap and secured the win with more than seven seconds over Lorenzo and 18 over Stoner. The Championship leader improved four positions to get again on the podium and add another 16 points very valuable for the overall standings, which he leads with an advantage of 40 points. His team mate at the Repsol Honda Team, Andrea Dovizioso, went back to the track on tenth position after his penalty and recovered lost ground by overtaking Edwards, Aoyama and ElÃ­as. Benefiting from Bautista’s crash, he finished fighting during the last laps with Marco Simoncelli for the fourth place, but finally had to settle for the fifth position.

The next stop of the World Championship will be in two week’s time at the Australian circuit of Phillip Island, Casey Stoner’s home race. The Repsol rider will have his first opportunity to secure the title, as he has 40 points of advantage and there are still 75 up for grabs –he will need to score 10 points more than Jorge Lorenzo.

Here is a look at today’s timings:

And the championship standings after today’s race: