The stunningly beautiful Phillip Island circuit with its sweeping and flowing nature has a reputation for unpredictable weather, providing challenging conditions including heavy rain, cold temperatures and high winds for the MotoGP riders to overcome. Reigning World Champion Jorge Lorenzo can claim two 250cc Grand Prix victories and one MotoGP second place podium at the track last year. The Mallorcan will be looking for any opportunity to close the current 40 point gap to Championship leader Casey Stoner with just three races remaining of the season.

Ben Spies is no stranger to Phillip Island, kicking off his rookie World Superbike year there with a race win in 2009 from pole position and enjoying a strong performance as a MotoGP rookie in 2010. Last year’s race saw him start from the front row alongside 2011 Yamaha team mate Lorenzo, finishing a respectable fifth and claiming the 2010 Rookie of the Year title.

The Repsol Honda Team rider has his first chance to secure the World Championship at his home race, the Australian Grand Prix. Stoner needs to gather 10 points more than Lorenzo.

Next Sunday can be a special day for Casey Stoner, not only because he will turn 26 and will compete at his home race. That weekend, the Australian rider of the Repsol Honda Team has his first chance to secure the MotoGP World Championship. He needs 10 points more than his main rival, Jorge Lorenzo, to achieve for the second time in his career the title of World Champion of the Premiere category –he achieved his first title in 2007–. 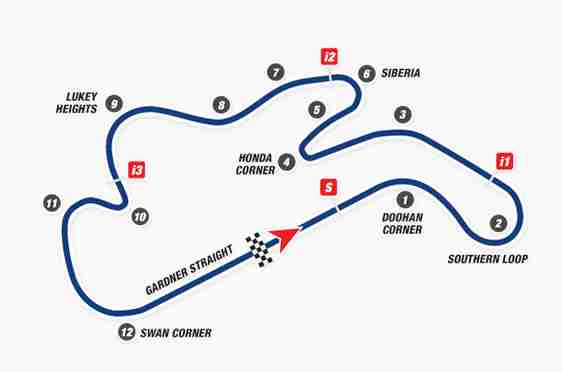 After his third place in Japan, the Aussie arrives to the sixteenth round of the season with an advantage of 40 points with only 75 more up for grabs. That means that to become the new king of the class, Casey Stoner only has one rival, which is the current World Champion, the Spaniard Jorge Lorenzo. The numbers of the Repsol rider show that the feat is possible.

Though history never repeats itself, the result of the current leader of the overall standings at the Phillip Island circuit during the last five years cannot be overlooked. Five races in MotoGP and four victories. Casey Stoner has got to the highest step of the podium in Australian in the last four editions. Only in 2006, his debut year in the category, he had to settle for the sixth place.

If that was not enough, the Australian is having an amazing season. In his first year with the Repsol Honda Team colours he has achieved 14 podiums –the last 13 consecutive– in the 15 rounds already held and this way he equals his 2007 record. He has 8 victories, 1 second position and 5 thirds. With 3 races to go and 300 points, Casey Stoner could make history. He might be able to improve his best result in MotoGP –367 points in 2007– and become, if he wins the last three races, in the second rider of the premiere category that gathers the most points in one year.

The chances that the Australian can be champion this Sunday depend on whether he can take 10 more points than Lorenzo. To achieve that, Stoner must be among the first six. With a victory in Phillip Island, a fourth position for Lorenzo will allow him to claim the title; if he finishes 2nd, 3rd, 4th, or 5th, the Aussie will need that the Spanish rider was not better than 6th, 10th, 13th or 15th, respectively; the 6th position will only serve if Lorenzo did not score any points.

In 2007, Casey Stoner became in Japan the first World Champion of the MotoGP 800cc era, three rounds before the end of the Championship; now, in 2011, the Repsol Honda Team rider can close another fantastic season in Australia and become the next king of the class.

The Ducati Team is headed to the first of two overseas races that in the space of two weeks will take the Italian team first to Australia and then to Malaysia. The Phillip Island Grand Prix is one of the most popular rounds among the MotoGP riders because the circuit that twists along the Bass Strait features an old-style layout that is fast and flowing, and spectacular to ride.

Apart from 2006, when their best result was fourth place, the Ducati Team has always finished on the podium at Phillip Island. As for Valentino Rossi, he has enjoyed no fewer than seven victories there in his career, plus another six podium finishes. On Friday, the Italian will be testing the readiness of the hand that he injured in the crash in Japan, and he’ll also try continue the good progress he made there with the GP11.1’s setup.

Nicky Hayden is also a great admirer of the Down Under circuit, where he owns the lap record (2008), and where he will be celebrating his 150th Grand Prix this weekend. He has climbed the podium three times at Phillip Island, and he finished fourth last year with the Ducati.

There are only three rounds left before the end of the season and the Australian Grand Prix can decide the first title, that of MotoGP. Casey Stoner will have his first chance to become the new king of the class. His team mates, Dani Pedrosa and Andrea Dovizioso will seek the third consecutive victory for the Repsol Honda Team to secure the third place of the overall standings. In Moto2, Marc MÃ¡rquez will defend the lead of the intermediate category for the first time this year, after taking it last week in Motegi.

Competing at home and turning 26 this Sunday could become simple anecdotes for Casey Stoner if he is able to score 10 points more than Jorge Lorenzo –second in the overall standings– in this Grand Prix. This result will crown him for the second time in his career as MotoGP World Champion. His statistics in Phillip Island cannot be better. The four consecutive victories he achieved in the last four years mean that this is the track where the Aussie has been more successful in the premiere category.

After three consecutive second positions, Dani Pedrosa finally achieved a new victory in Motegi. The Spaniard of the Repsol Honda Team will compete again in Australia, where last year he was not able to be due to an injury. To add a fourth victory to this season’s record will be Pedrosa’s aim, as he is only one point away from the third position of the overall standings. That place is now in the hands of his team mate, Andrea Dovizioso. His fifth position in the Japanese Grand Prix does not reflect the good weekend he had, which was spoiled only by a ride trough penalty. The Italian rider will try to take revenge from the 2010 race at Phillip Island, where he was forced to retire due to mechanical issues, by trying to be again on the podium.

He did not score a single point of the first 75 up for grabs, but the Moto2 rookie of the year, Marc MÃ¡rquez, leads the overall standings with only a 1-point advantage over the only rival that can fight with him for the title, Germany’s Stefan Bradl. His second place in Motegi –and tenth consecutive podium–, is a superb result to start the last part of the calendar. The Repsol rider will face this weekend a new challenge in Australia on his Moto2, in one of his favourite tracks on the 125cc, where last year he achieved the pole position and a crushing victory. The objective for Emilio Alzamora’s pupil will be to keep his spectacular run of good results that made him score 190 points of the last 200 up for grabs.