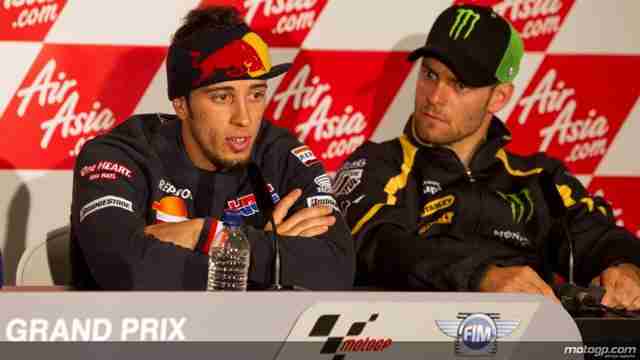 Andrea Dovizioso has signed a contract with the Monster Tech 3 Yamaha for the 2012 season. Dovizioso found himself the odd-man out after Honda announced that it would only have three factory riders for the upcoming season. With Stoner and Pedrosa still under contract through that term, this news meant a tough choice between Dovi and rival Marco Simoncelli. Though consistently placing higher than his fellow Italian, Dovizioso lost out to SuperSic’s bold track moves and likable off-track demeanor.

Dovi’s move to Tech 3 increases the speculation regarding who will take the open seat at LCR Honda (no one is expecting Toni Elias to have his contract renewed for 2012). With Dovi out of the picture, rumors go from former-LCR rider Randy de Puniet, to factory Suzuki rider Ãlvaro Bautista, with Marc Marquez and even John Hopkins names being mentioned. Whether any of those candidates would receive Dovi’s promised factory-spec Honda is up for speculation (except for Marquez who would be barred from a factory bike during his rookie season), though we suspect that offer might have been a $4-5 million concession LCR made purely for Dovi alone.

The switch to the satellite Yamaha squad will be the first time Dovizioso in his GP career  has ridden a bike other than a Honda, though the move could be a potent one for the Italian. HRC currently has a plethora of candidate riders in factory seat, and has its line of succession for factory positions well in order (most notably Moto2 rider Marc Marquez). While bad news for Dovi, the falling-out from Honda meant good news for the rest of the MotoGP teams who were anxious to retain the services of the potently quick Repsol Honda rider. HervÃ© Poncharal’s Monster Tech 3 Yamaha team seemingly won the battle of the offers, as it’s being reported that the French team has signed Andrea Dovizioso for the 2012 season, beating out the many other offers Dovi had on the table, including a reportedly factory-spec Honda at LCR Honda.

Meanwhile Yamaha has a path of lesser resistance into the factory team, with the factory having virtually no one that’s ready for a factory bike in the queue. If Dovi can prove his mettle on the satellite 1,000cc Yamaha YZR-M1, and Ben Spies has another season of mixed results, it is possible Dovi could find a factory seat for the 2013 season, an idea that’s helped by the fact that many MotoGP rider contracts are set to expire in 2012. With MotoGP headed to Australia next weekend, we expect more news will come out of the GP paddock at Phillip Island.