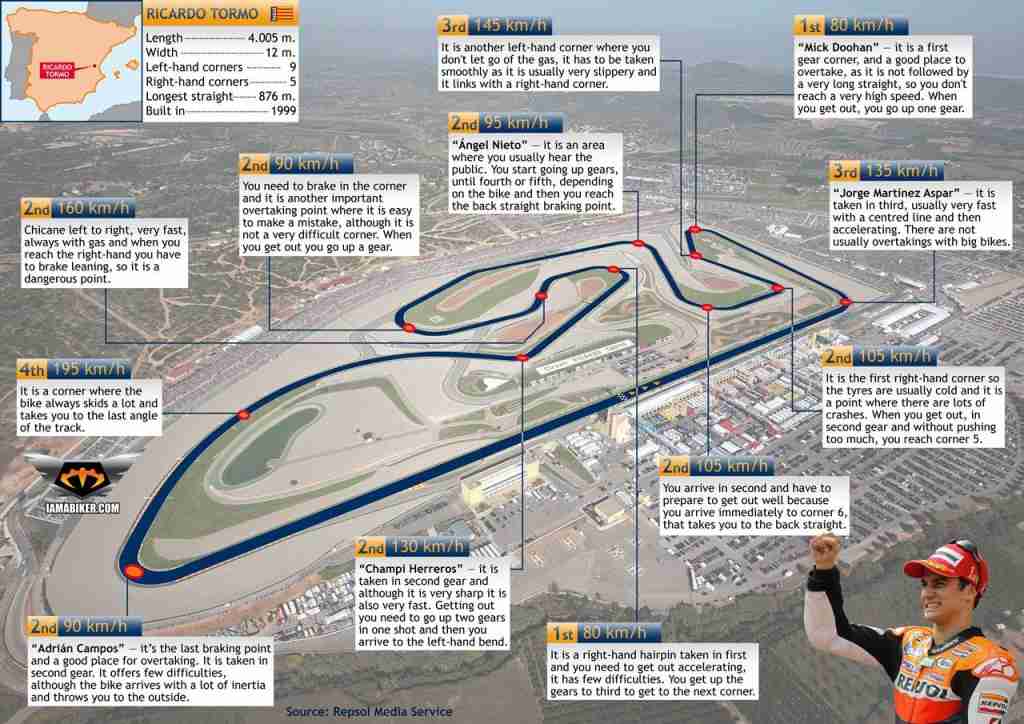 The Valencian track of Ricardo Tormo will hold the Motorcycling World Championship finale this weekend. The 4.005 metres of the circuit will be the last place where the 800cc prototypes will fly, before going back next year to the 1000cc bikes. Dani Pedrosa, who has been on the highest step of the podium in all categories, arrives looking forward to this fourth home race. The Repsol Honda Team rider analyzes each corner of this unique track, very well-known by all the World Championship grid.

The 9 left-hand and 5 right-hand corners make the Ricardo Tormo circuit a fairly slow and winding track. Pedrosa sees, in this demanding and technical track, two key bends where the rider needs to pay special attention: corner 4, as it is the first to the right and corner 9-10, one of the most difficult points of the circuit. The race promises a lot of excitement due to the several overtaking chances. In Repsol Honda Team’s rider 26 opinion, the key points to overtake are the Mick Doohan corner (2), corner 8 and the last (14) before entering the main straight.

The Spanish rider, fourth in the overall standings, will fight for the third position of the Championship in Cheste with his team mate at the Repsol Honda Team, Andrea Dovizioso, who has an advantage of four points. Dani Pedrosa, with three victories so far this year, will try to get this Sunday his first home win of the year. After missing the Catalunya Grand Prix due to an injury and finishing second in Jerez and Motorland AragÃ³n, the Repsol rider has a golden opportunity to finish this season in the best possible way.