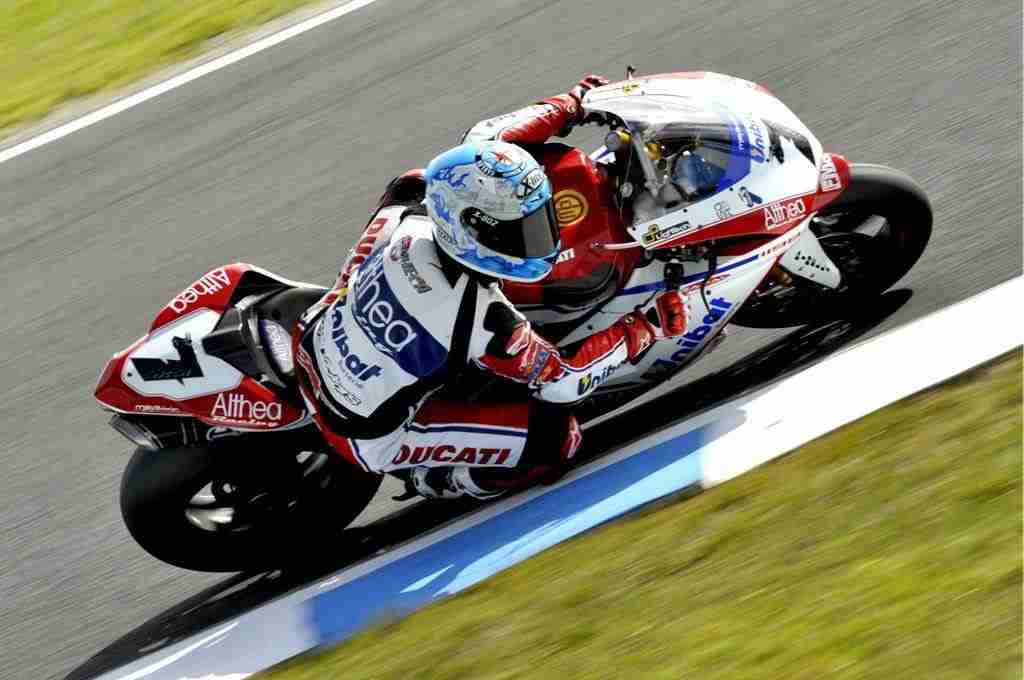 For the 14th time a Ducati rider has won the World Superbike Championship and the Ducati Museum will soon be displaying its 17th Manufacturers’ World Champion Title due to Carlos Checa and Team Althea.

With victory in Race 1 of the French round of the World Superbike Championship at Magny-Cours, Carlos Checa celebrated his first World Championship title and brought Ducati’s list of Riders’ titles to an incredible 14. Completing the historic day for Ducati, the Italian brand also secured their 17th Manufacturers’ World Superbike Championship in addition to the Superstock 1000 FIM Cup Rider’s and Manufacturers’ titles.
Spaniard, Carlos Checa, secured his title aboard the Team Althea Racing Ducati 1198 at the penultimate round of the 2011 World Superbike season, his convincing and championship-winning victory in Race 1 being followed by an equally spectacular win in Race 2. His world-beating form this year has produced 6 pole positions, 14 race wins and 20 podium places and he now moves on to the final race of the year in Portimao, Portugal on 16 October with 107 points advantage in the standings and the title won.

Having written his name into the history of World Superbike, Checa also reconfirms the competiveness of the L-Twin Ducati 1198 by taking the model to World Superbike title number 2. The victory enables the Borgo Panigale-based factory in Bologna to celebrate their 17th Manufacturers’ title, underlining the continued passion they have for the production-based World Superbike series.

Starting Sunday’s race from the front of the grid, Carlos Checa needed only to extend his championship lead by 3 points to mathematically secure the title, but soon controlled the race from the front, took the win by 2.2 seconds and won his World Championship in style. With the pressure off for Race 2, Checa maintained his cool, staying with leaders in the early part of the race before stretching a 1.2 second lead and winning the double.

“I’m so happy to win my first world title and so happy that I did it aboard a Ducati,” said Carlos Checa as the newly crowned 2011 World Superbike Champion. “My sincere thanks go to Team Althea Racing and everyone at Ducati who has worked hard to help me get these results. Together we’ve done a great job this year, immediately starting the season well against fast riders on very competitive bikes. From mid-season we started to think about the title, but when the pressure increased we never lost our concentration and now we’re here. It’s a great feeling! We’re still looking forward, though, and now we’re concentrating on a big finish to the season at the final race in Portimao.” 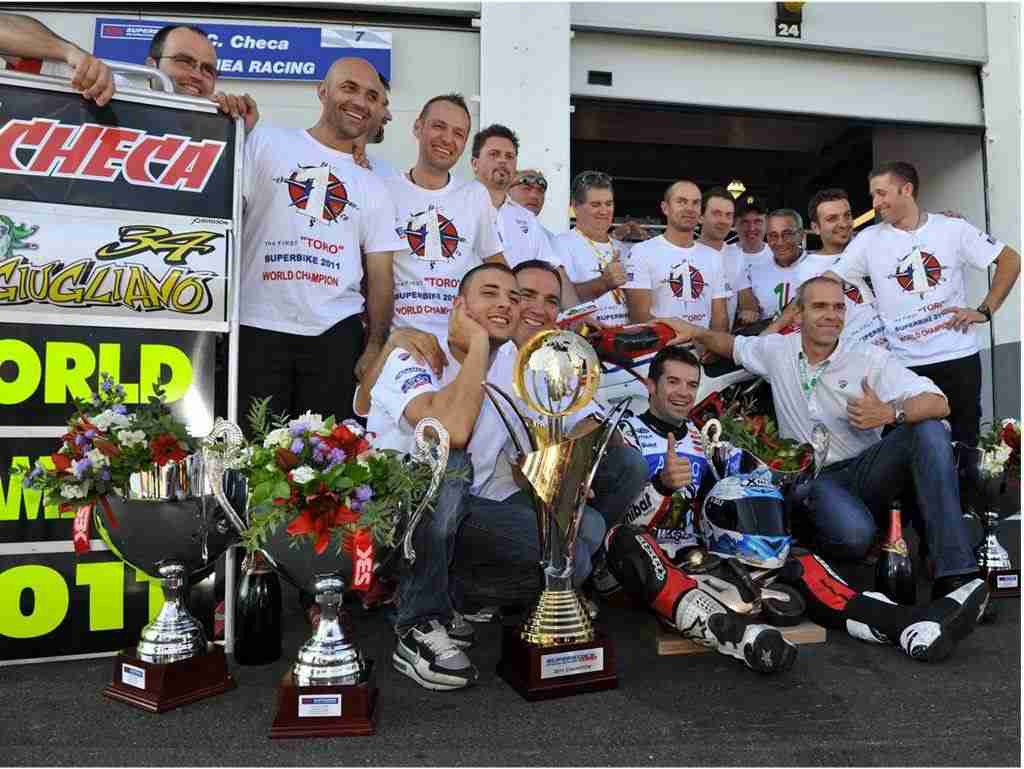 President and CEO of Ducati Motor Holding, Gabriele Del Torchio, said: “I am very happy for the Riders’ title and extremely proud of the Manufacturers’ title. This significant achievement has now proved for the 17th time, Ducati’s supremacy in the production-based series and confirmed the success of the 1198, not only on the track, but also commercially and as an example of our Italian design and creativity. Carlos has been fantastic. He is an exceptional rider, always professional and always a true “Ducatista” by displaying the same determination and spirit as our company and our motorcycles. Thanks again Carlos and particular thanks to everyone at Team Althea Racing and Ducati Corse and all the staff at Ducati who have contributed to this fantastic result. Winning the Riders’ and Manufacturers’ titles also in Superstock today have truly made this a fantastic Sunday and a memorable event that is very important for our company and our twin-cylinder heritage.”

“A big thank you to Carlos who sincerely deserves this victory, both as a rider and as a person,” said Filippo Preziosi, Ducati Corse General Director. “A big thanks also to Team Althea principle, Genesio Bevilaqua, for the passion with which he entered this adventure with us, for believing in Carlos and believing in Ducati. Thanks also to everyone in Ducati Corse working on the Superbike project, Ernesto Marinelli, Marco Lozej and the whole development team for the professionalism and passion needed to win this new world title. Our achievements today are even more enhanced by the victories also in Superstock, making this a day that will live forever in our list of achievements and one that we’ll always remember.”