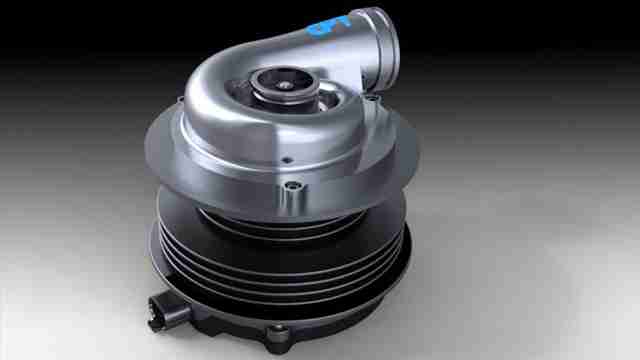 The 16th Annual Supercharging conference was held last week at the Technical University of Dresden in Germany. Many interesting new developments in the critically important field of forced induction were at display. Most motor vehicles only use maximum power for a small fraction of their time on the road, and with downsizing of engines now standard practice for the auto industry, supercharging is an ideal way of providing that power boost from a small engine.

The latest news is that it of a 48 volt supercharger which uses 7 kW of electrical power and delivers an extra six to ten times the power at the crankshaft – ideal for small engines that require extra grunt for overtaking and steep hills.

Based on CPT’s Variable Torque Enhancement System (VTES), the air cooled supercharger will rev instantaneously (within a third of a second) to 70,000rpm, overcoming the major drawback of “lag” associated with crankshaft driven superchargers and exhaust gas driven turbochargers. The new CPT electric supercharger uses switched reluctance motor technology and is well placed to exploit the proposed 48 volt electrical architecture announced earlier this year by European vehicle manufacturers. Switched reluctance motors are highly efficient and avoid the use of permanent magnets and rare earth materials.

CPT is hoping that vehicle manufacturers will see its transient electric boosting as a more efficient alternative to the mechanical supercharging and/or twin turbo-charging systems currently used in micro hybrid vehicles.The company has commissioned AVL to build the demonstrator, which is currently undergoing final shake-down trials in Austria in readiness for evaluation by vehicle manufacturers. “Even with the higher transmission gearing adopted by manufacturers to reduce CO2 emissions and particularly at the lowest engine revs, the instant additional torque when the driver needs to accelerate these smaller power-trains from low engine speeds is already very beneficial at 12 volts,” says CPT’s engineering director and chief technical officer Guy Morris. “Electric supercharging at 48 volts extends that envelope of torque enhancement. It’s an efficient way of using 7 kW of stored electrical power to deliver not less than six times that at the crankshaft. In other words adding a useful 42 kW boost for low speed overtaking and hill climbs. Depending on the turbocharged engine system optimization the boost could be as much as much as 70 kW or 10 times the instantaneous power extracted from the batteries or super-capacitors.”

“The torque response of these future VTES equipped vehicles will be equivalent to the best mass market vehicles on the road today,” says Morris. “There will be no torque deficit or other tradeoffs from essential engine downsizing and higher gearing, which now dominates the development of internal combustion engines. If anything their low speed performance will be even better, while still delivering very significant fuel economy benefits and CO2 reduction.”