Marc Marquez took a back-to-back victory at Brno today in challenging conditions, his third this year and the 58th in his career, extending his championship lead to 14 points over his closest follower.

It was the fifth flag-to-flag race that Marc has perfectly mastered thanks to a mix of tactics, determination, and teamwork (Assen 2014, Misano 2015, Argentina and Sachsenring 2016, Brno 2017). On this occasion the Spaniard found himself struggling soon after the lights went off, having fit a soft rear tyre that he wasn’t at ease with on a drying track. He therefore decided to change bikes quite soon and entered the pit on lap two, where his team was ready with his second bike fitted with slick tyres. That allowed him to pull a great gap on his opponents, which he managed until the chequered flag.

To complete the excellent day of the Repsol Honda Team, Dani Pedrosa achieved a strong second place, bringing his career podium tally to 150 (and his MotoGP podium tally to 109, one more than Jorge Lorenzo). Dani switched to his second bike on lap four and re-entered the race in eighth position. He immediately started riding at a very fast pace, fighting his way forward to second and setting the fastest lap of the race along the way. 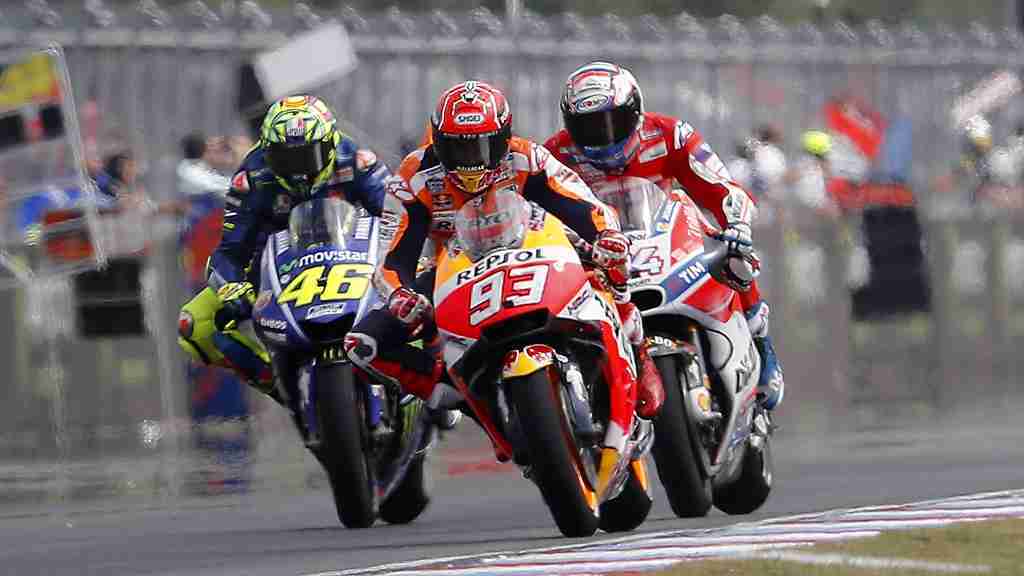 Marc and Dani were happy to have been able to honour the “Maestro” Angel Nieto, 12+1 World Champion, with their great performance. Nieto passed away on Thursday.

Starting the race from seventh on the grid, Viñales slotted into sixth position after the first corner. He followed his teammate past Dani Pedrosa to fifth on the opening lap, but it soon became clear the track was too dry for the wet tyres to last.

The Yamaha rider quickly headed into the pits after lap 4 to switch bikes. Back on track in 13th place, he quickly got back into the groove and gained positions as other riders came in to change bikes a lap later. He soon circulated in eleventh place and was on the move with 17 laps to go. Putting his head down, he rode a superb race. The Spaniard carried a strong pace over the next nine laps and climbed up to third, dropping a personal best on lap 16, followed by a fastest race lap of 1’57.052s. However, he was unable to close the gap to the front riders and crossed the line in third place, 18.135s from first.

Rossi had a decent start from second position, in what was declared a wet race, taking fifth place after the initial run up to the first corner. He quickly picked up a place on the opening lap and started chasing the top-3. The Doctor was flying on his second lap, passing Andrea Dovizioso and Marc Marquez as the sun broke through the clouds.

With 20 laps ahead of him, the Italian found himself in second place, with a 1.4s gap to Jorge Lorenzo. Riding faster than anyone on track, he closed right up and took over at the front on lap 4, but had to come in to change bikes a lap later. The nine-time World Champion rejoined the pack in 14th place. Over the next 17 laps he was the star of the race apart from the master class move from Marquez initially, cutting through the field like a knife through butter to ultimately secure fourth position, finishing just off the podium, 20.466s from the front.

Today’s race results see Viñales hold second place in the standings, 14 points from first and eight points ahead of Rossi, who holds fourth in the championship. Yamaha retains the lead in the Constructor’s rankings, by nine points, while the Movistar Yamaha MotoGP Team currently lies in second place in the Team’s classification, five points from the lead.