Andrea Dovizioso powered to a spectacular and truly memorable win in the Austrian GP, held today at the Red Bull Ring circuit near Spielberg. The Ducati Team’s Italian rider, who started from the front row of the grid after going second quickest in qualifying, rode a masterful race to always stay in the leading group, and he took over at the front on lap 18. Andrea was then passed by Marquez but was back in the lead again on lap 22 and he held on to that position until the chequered flag, despite a last-ditch attempt by the Spanish rider in the final corner.

Thanks to the 25 points’ haul for today’s win, his third of the season, Dovizioso has moved into second place in the overall championship standings, reducing the gap from leader Marquez to 16 points.

The Austrian GP is the sixth race of the eleven so far this season in which Márquez and Dani Pedrosa have been on the podium together: This previously occurred in Austin, Spain, Catalonia, Germany and the Czech Republic. The pair have now been on the podium at every venue on the current MotoGP calendar, and have seven rostrum finishes each from the last nine races.

Jorge Lorenzo had a good race to finish fourth at the line. The Spanish rider got a great start from the front row and took the lead on the opening lap, followed by Marquez and Dovizioso. Jorge stayed in the lead of the race for eleven laps, but was then passed by Dovizioso and the two factory Honda riders, but he defended his fourth place right until the chequered flag. Thanks to today’s result, Lorenzo now lies seventh in the championship with 79 points. 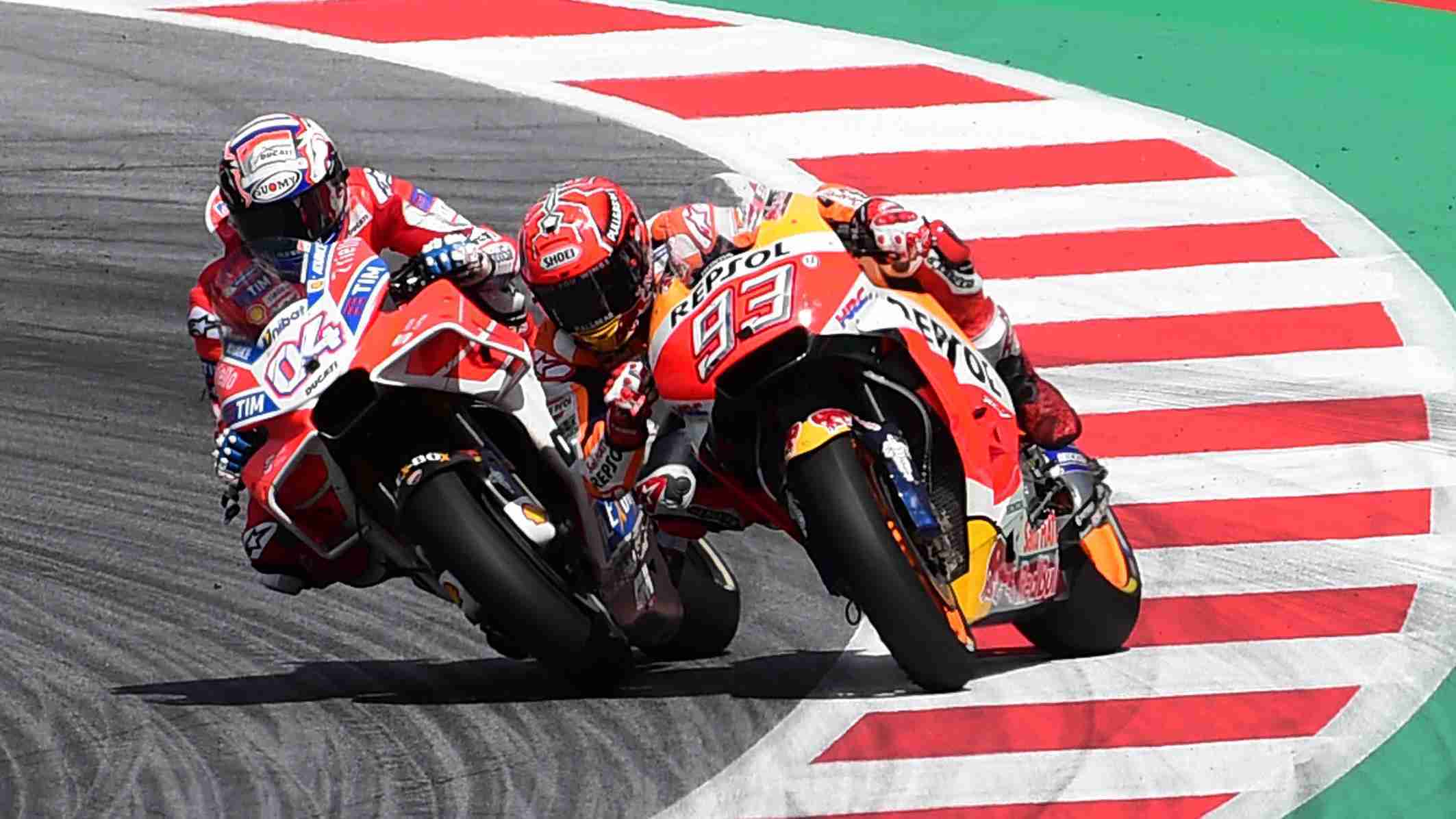 MotoGP will return to the track again in a couple of weeks’ time at the Silverstone circuit in the UK on the weekend of August 25-27.

“It was a crazy race, but to be honest the whole weekend was incredible, and in particular the final curve of the last lap, but I managed to remain clear headed and was aware that Marquez was going to try and pass me. It was a very difficult situation because if Marc had closed the door coming out of the corner, he would have forced me out and passed me. Instead I was able to resist his attack and I went on to win! I’m very satisfied with the way we managed the entire weekend with my team: understanding the right choice of tyres was really difficult but we did it. We had a great race, we’re making up points in the championship, and we’ve got all the right cards to fight for the title.”

I wouldn’t have slept well tonight if I didn’t try to go for the win in the last corner! But it wasn’t possible. Today Dovi had just a little bit more than us and it was difficult to overtake him. I tried my best all race, really gave it my all, and I lost the rear many times. It was a great battle, and Dovi deserved this victory as he rode very well. We got this second place and it’s good. I’m very happy with these 20 points at this track where I had struggled a lot last year. It’s an important result for the Championship. We’re working well; step-by-step, we found a good base that allowed us to be there, and to be consistent in every situation. Today I was able to try that move at the end because I was feeling good with the bike. It will be important to continue like this and to try and be on the podium at every race.

I’m very, very happy with how this weekend turned out and with this podium finish, as we had struggled a lot in the practices, had to go through Q1, and finally qualified just eighth on the grid. But it turned out in the race that I was faster than we were expecting. I still had some issues with the front locking and the rear spinning, but our race strategy worked very well. I wasn’t too aggressive in the beginning; I took my time with a full tank, saving some fuel, and then step-by-step I increased my pace until I closed the gap to the front of the race, also because Marc and Dovi were battling and disturbing each other. Unfortunately, when I caught them I had so much spinning that the rear tyre overheated and I had no more grip and drive. I wanted to stay with them and try to fight with them but even though I couldn’t, I’m happy with this podium and proud of my team and of the work we did here.

“I think that this was my best race of the year: I started from the front row, I led the race for 11 laps, and I finished the GP just over six seconds down on the winner. This time we were a bit lacking in power, because from the third lap onwards I had to change the mapping to keep the fuel consumption under control, and above all I was losing a lot on the straights to my rivals. The rear tyre also deteriorated on the right side and I was unable to keep touch with the leading group. Things are going better at every race, I’m riding more convincingly and I’m able to get more out of my bike. We’re missing very little, just a couple of tenths, to be able to fight for the win and so we must be satisfied. Congratulations to Andrea, because he deserved to win what was a very difficult race.”