Suzuki India is finally showing signs of the right kind of activity. Following up on the success of the Gixxer series and the launch of the GSX-S series, Suzuki has now announced that they will be participating in the One Make Championship that will run along the national championship from June 2015. 20 numbers of the fully faired Gixxer SF will be made available in race spec form for the championship and will be backed up by Suzuki’s technical team on site for assistance. The races which will be held at the Kari Motor Speedway and the Madras Motor Race Track has been gaining immense popularity over recent years. Regular manufacturers at the event are the Yamaha, Honda and TVS. KTM is also expected to join in soon. The national championship that is also run alongside the One Make Championship has also been gaining immense popularity over the years thanks to increasing interest in motorsports. The championship which will end only in October 2015 will have two classes – expert and novice.

Suzuki joining the One Make Championship is only good news for the sport. With a racing history that goes many generations back, it will be an absolute pleasure to see Suzuki start their racing programs here in India. Also right now we are more interested in seeing the Gixxer Sf in race trim. In the pic we have here, we can see lowered handlebars, a free flow exhaust and rear set footpegs. Stuff like the headlight and mirrors have been removed. So expect a slightly lighter motorcycle. However changes to the engine seem unlikely. Brakes seem to be the stock setup as well, so are the tyres. Hope to see a bigger disc at front on the final race ready machine. More updates from the track on race day! 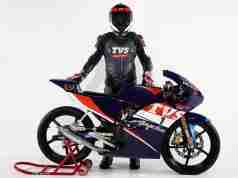