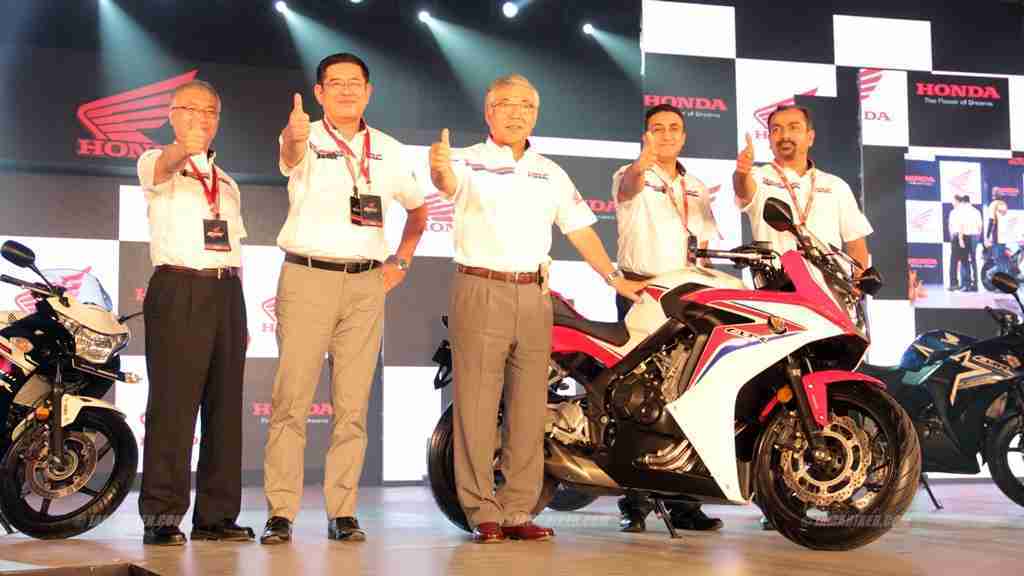 A lot was expected from Honda at the Honda Revfest. We all knew the Honda CBR650F was coming and were keen to know the pricing. But more suspense lay on the other four motorcycles that were supposed to be new updated models. The event actually started at 11 am for the media personnel and that’s where we got a chance to get up close with all the bikes. This was followed by the main Revfest event later on in the day at 6:30 with music by top bands, Lagori and Raghu Dixit Project and a GAS fashion show along with the unveiling of the bikes again. What was commendable was that the launch was simultaneously held in 8 cities and streamed across all of them. The main event of course was at Delhi and was presided by Mr. Keita Muramatsu – President & CEO – HMSI, Mr. Y.S Guleria, Senior VP, S&M – HMSI along with bollywood stars Akshay Kumar and Taapsee Pannu.

The five motorcycles that were launched at the Honda Revfest are, the Honda Livo (110cc), 2015 Honda CBR250R (new colour), 2015 Honda CBR150R (new colour), the all new Honda CB Hornet 160R and of course the Honda CBR650F. Honda also displayed a vague outline of a new bike that is under development, from what we could see, it looked like a replacement to the Honda Shine. The Honda CBR650F has been priced at Rs. 7,40,258/- ex-showroom in Bangalore, which works out to an on-road price of Rs. 8.49 lakh.

To be entirely up-front here, while we were quite impressed with the Honda CB Hornet 160R, and not very surprised with the pricing (or shall we say overpricing?) of the Honda CBR650F, we were really disappointed with the “just” colour update of both the CBR250R and the CBR150R. Forget the upgraded 300cc engine, we expected at least the twin headlight version coming for both the models. With competition in this segment already quite heated up, it was almost taken for granted that Honda Revfest would see these updated models. Only silver lining in the cloud being that Honda folks have promised to surprise us at the Auto Expo next year. Fingers crossed again.