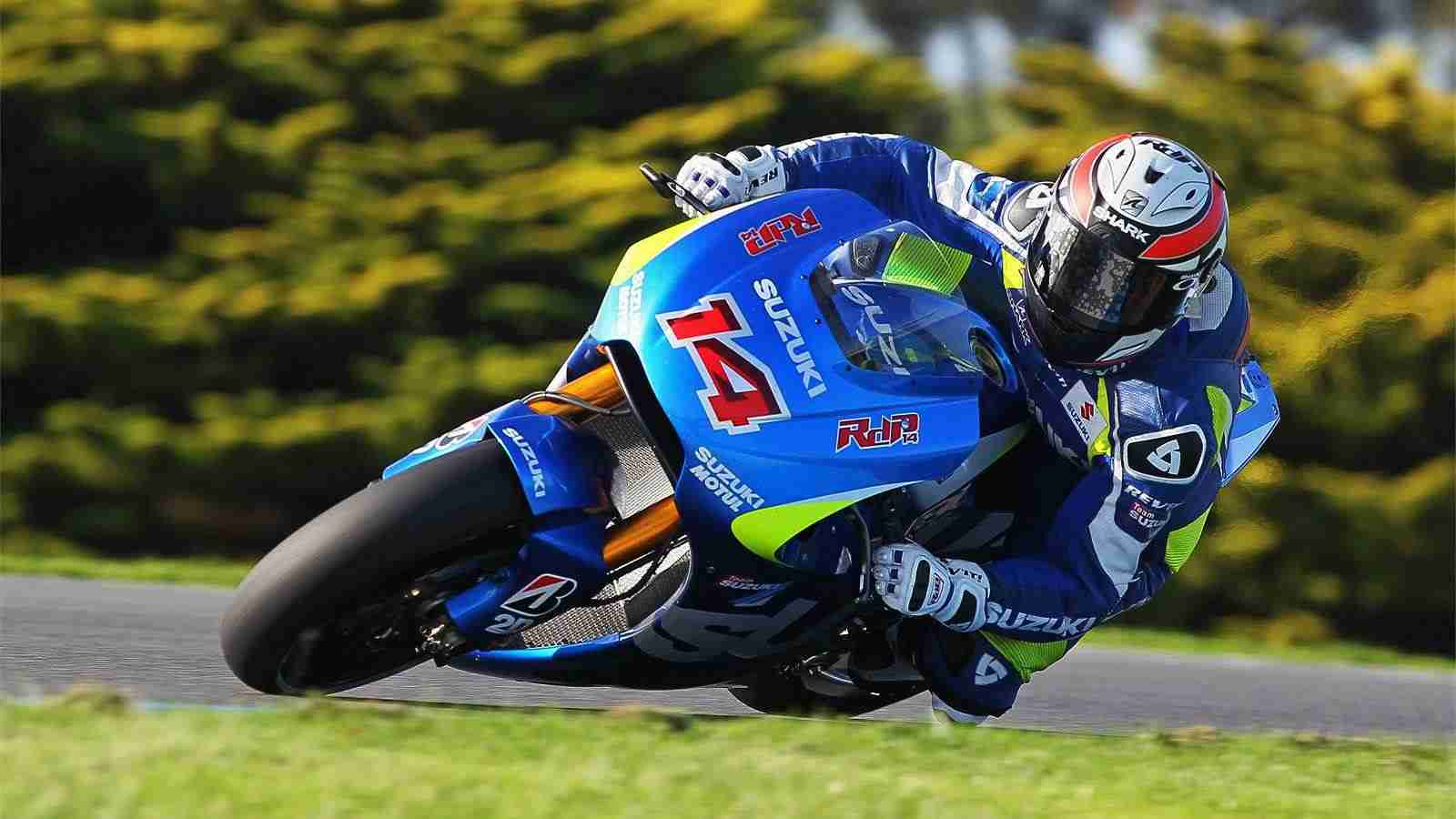 The prologue to Suzuki’s latest chapter of Grand Prix racing will open this weekend when the revitalised works team roll into action with the refined version of the GSX-RR at the Ricardo Tormo circuit for the Gran Premio Generali de la Comunitat Valenciana.

Randy De Puniet’s presence as a ‘wild-card’, overseen by the experience and expertise of Davide Brivio, and with the honed GSX-RR, will mark the first time the factory is back on the grid of the premier class since the same Grand Prix in 2011. The outing represents a competitive statement-of-intent ahead of the first testing run for the 2015 season that will take place on Monday and a matter of hours after the last chequered flag of the 2014 championship.

Suzuki has been riding, analysing and testing comprehensively in 2014 with sessions at Grand Prix venues of Sepang, Termas de Rio Hondo, Circuit of the Americas, Phillip Island and Catalunya and have now chosen to re-join the fray and bring a manufacturer with 40 years of Grand Prix history and six (Rider) titles in the premier class back to the sharp-edge of the sport.

“This is a big moment for us because we have been testing for so long,” commented Brivio. “We have been waiting for this. It is only a wild-card appearance and it is the last race of the year but I’m happy to be going to Valencia and I think it is a reward for Randy for the big job he has done on this project.

“It is the end of our preparation and I’m excited,” continued the Italian, who has helmed Suzuki’s MotoGP regeneration for over a year. “This is where the new adventure really starts. I’m aware we have a big job to do, and during the weekend we will take a lot of notes for the work we need to do through the winter. This is our first comparison with our competitors and you can only ever really see where you are through a race situation so it’s an important meeting.”

Suzuki celebrated its championships (and seven constructor’s titles) in a 24-year spell of the sport from 1976 to 2000 and with renowned winners such as Barry Sheene, Marco Lucchinelli, Franco Uncini, Kevin Schwantz and Kenny Roberts Jnr in the saddle of its formidable two-stroke technology. Suzuki is now chasing the prospect of a second victory in the MotoGP (four-stroke) era after Chris Vermeulen gave the marque the initial spoils in the 2007 French Grand Prix at Le Mans under the limitations of the now-defunct 800cc engine regulation. Suzuki’s last MotoGP podium appearance was at the 2008 Red Bull U.S. Grand Prix courtesy of Loris Capirossi.

“Suzuki has a long racing history and it is exciting to be part of the comeback,” enthused Brivio. “I am aware that the competition are very strong and they have kept racing while Suzuki stepped away for almost three seasons, so we need to catch-up and recover the gap and also learn as much as possible to get to their level. The target is to be in a position to challenge our competitors as soon as we can. Let’s start the challenge!”

Valencia is the last stop of 18 on the 2014 MotoGP trail but it is one in which Suzuki has enjoyed reasonably decent showings in previous visits. John Hopkins captured a podium finish with third place in 2007, Capirossi was ninth in 2008 and Alvaro Bautista also broke into the top-10 back in 2010.

Largely flat and encapsulated within a ‘bowl’ that fits 60,000 spectators in the surrounding ‘tribunas’, the Circuit Ricardo Tormo venue (named after the Valencian-born racer that clinched the 1978 and 1981 50cc FIM World Championships) is a winding and tight 4km course with nine left turns, five right and perhaps best characterised by the long descending left-hand curve after the Champi Herreros right handed ‘flick’. The track and the city of Valencia has been the site of the MotoGP ‘curtain closer’ since 2002.

Thirty laps, 120km and 74-and-a-half miles remain of the 2014 MotoGP campaign and De Puniet – who has worked long and diligently with testing mileage of the GSX-RR – will be making the most of his swansong in the series where he notched 252 Grand Prix appearances (and two MotoGP podium results) before taking a berth with the Crescent Suzuki team in World Superbike for 2015.

“I’m excited. I’ve missed racing and it feels like a long time,” the 33-year-old Frenchman says. “We were out at Suzuka (the 8-Hour) but it was a different bike and pipe. I’m proud to be part of this comeback on the factory bike and I know it will be difficult to judge what result we can get but I want to enjoy the race and give the best that I can.

“I like the track even though it is not easy on a MotoGP bike,” he adds, talking specifically about Circuit Ricardo Tormo. “It is a place where you need good grip and traction and that is something we worked a lot on in the last two tests. We are right at the end of the championship; but we are just ‘beginning’. I’m sure Valencia will be positive for us.”

Suzuki’s work will extend beyond practice, qualification and the race across Friday, Saturday and Sunday respectively (covered with a pleasant long-term weather forecast but with the chance of some showers on Sunday) as the primary 2015 test will take place on Monday where tyre warmers will come-off for new recruits Maverick Viñales and Aleix Espargaro.

“The GSX-RR will be the same for the test as used in the race,” says Brivio. “Randy will hand over the bike and it will be the same spec for Maverick and Aleix. We will then start our winter work and our job for 2015 based on the comments and the feedback from those first laps with those riders.”