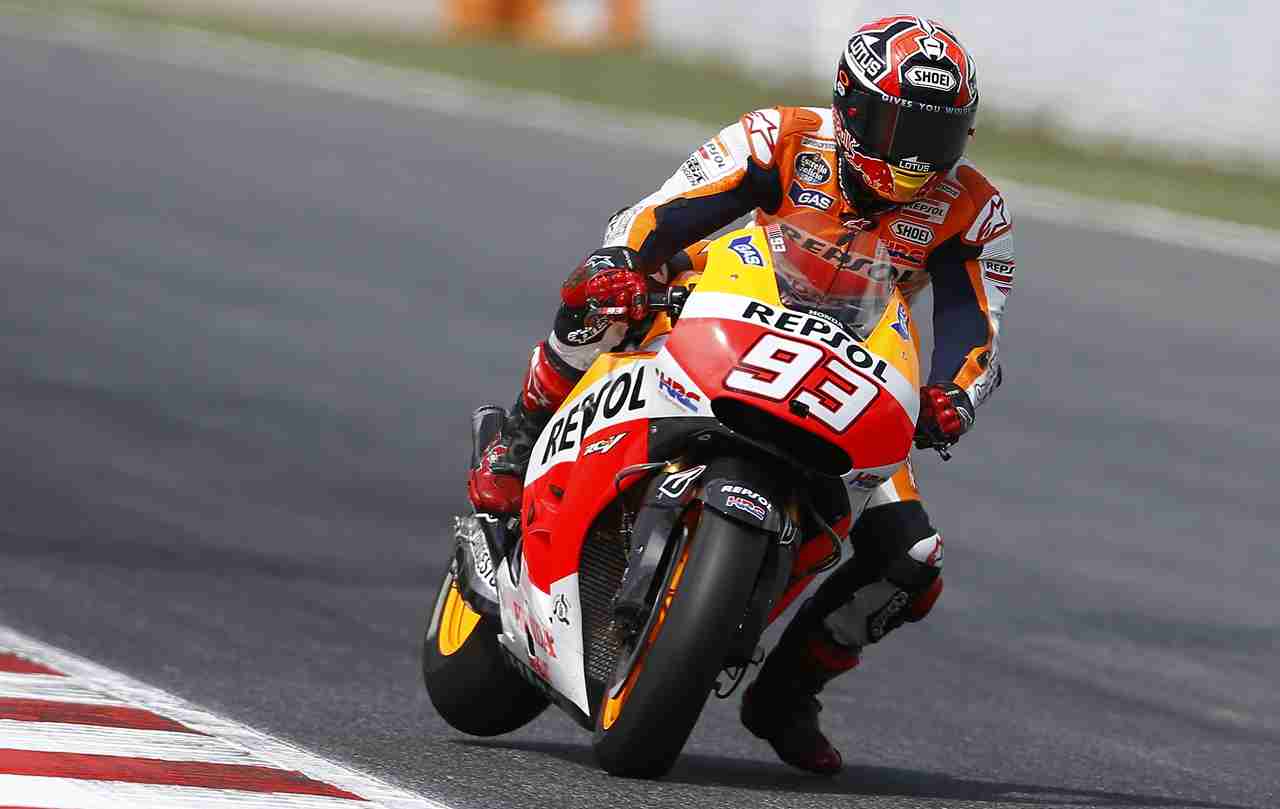 After yesterday’s fantastic race, rides were back on track today for the Official Post-Race Test. Marc worked on electronics and mapping settings and tested a new Ã–hlins fork and the new front Bridgestone tyre, confirming the tyre felt safer and provided better feedback than the current one. This morning he tested the proposed new circuit layout which uses the tighter F1 corner at the end of the back straight as a possible safety change and agreed it would be better as riders are not so close to the wall. Dani’s test programme also included the new front tyre, front fork and mapping settings. He reported positively on the new tyre â€’even though he tried it when the track temperature was at it’s lowestâ€’ but unfortunately it seems it won’t be available until Sepang. Marc was fastest for the day with his lap of 1’41.184 (just 0.049 off his qualifying time from Saturday) on lap 45 of 46. Dani finished the day seventh with a time of 1’41.969 on lap 18 of 61. Jorge Lorenzo and Valentino Rossi took time to test a new Akrapovic exhaust and a new Bridgestone hard front tyre for use in Sepang. There was also an opportunity to test a new engine spec for 2015 M1 and work on some small set up changes to overcome acceleration issues suffered by Jorge in yesterday’s race.

“Today we carried out a lot of testing: from the electronics, to the bike setup, to a bit of suspension work. I have to say, I felt very comfortable â€’even more so than during the Grand Prix weekend. There were also a few things that didn’t completely work out, or that we weren’t expecting, but this is also useful for us when it comes to picking up ideas and directions to go in for the future. Now we have to get ready for the next race in Assen”.

“Today we tested two different front forks and we also worked on the electronics setup and on a new front tyre compound. The tyre gave us good results and could be positive for us at some rounds this year, in conditions similar to yesterday’s Grand Prix, as it’s not too soft, nor too hard. The overall verdict of the day is positive, although we had already made the step forward between Mugello and Barcelona. Bearing in mind the new parts that could be tested out, we have managed to find a good feeling”.

“I expected to stay more tired because we had three days of riding, but I didn’t feel it today and I was able to make a lot of runs of more than six laps. We’ve tried some things to make the bike more stable on the throttle and to pick up the bike a little earlier we were able to improve it and make quite big steps so I’m happy as it’s not so easy to find some really important things in a test. We tried a front tyre, the feeling is a little better, even if we are just going to use it in Sepang, it’s better for stopping.”

“We had some interesting stuff to try, some different exhausts for during the season and also we worked for next season. We had a different engine to try for 2015 and then after something to try for Bridgestone, a front tyre which was an important test. It was ok, I felt good with the bike and we found something new. Now we have to continue like this.”

“All in all today’s test was really positive, as we achieved everything we set out to as well as clarifying a few mysterious problems from yesterday. I felt a lot more comfortable on the bike today plus I did 75 laps with my fastest time at the end which was even quicker than what I was able to achieve in the GP. In general we tested a lot of different things such as geometry settings, electronics, engine braking plus a new tyre from Bridgestone so it was a busy but productive schedule. Our main focus of the day was to improve braking stability and the engine-braking situation, we certainly achieved both of these factors. For me to be able to do a 41.2 lap time is really encouraging and I am definitely happy with the results. Now, I am looking forward to going to Assen to see how this new information we have gathered can be of benefit.”

“I am very pleased with what we have accomplished today. At the first test in Jerez in May we made some really good improvements that have clearly helped me to understand my Yamaha in a better way and I am convinced that we can safely say the same here. After a tricky weekend the team and I tested a lot of different settings on the bike which will be very interesting for the future races plus the lap times and the rhythm were very positive. The Yamaha felt great and the team worked really hard as always so we have definitely made a step forward in the areas which we were working on and for sure we have improved the bike a lot when compared to yesterday. On a Monday, it’s a bit late to say but the lack of experience in setting up the bike seems to be my biggest struggle at the moment and I am sure it is the reason for our performance this weekend. However, I now look forward to the next race at Assen as I am keen to see the value of the testing results.”

“Today we put the finishing touches to the base set-up, and worked on the electronics. We didn’t have any particularly new material to try, but it’s always important to do this sort of thing, because in a weekend you never have time to work calmly on the small details. It’s good to do a day’s testing, even though we didn’t do a lot of laps. We also tried the new Bridgestone tyre and the feeling is positive, even though there wasn’t much heat in the track surface.”

“Today we had to confirm some settings from the race weekend. We improved them in a race condition, even though I didn’t set a fast time today, and I’m happier than what I was over the race weekend.”