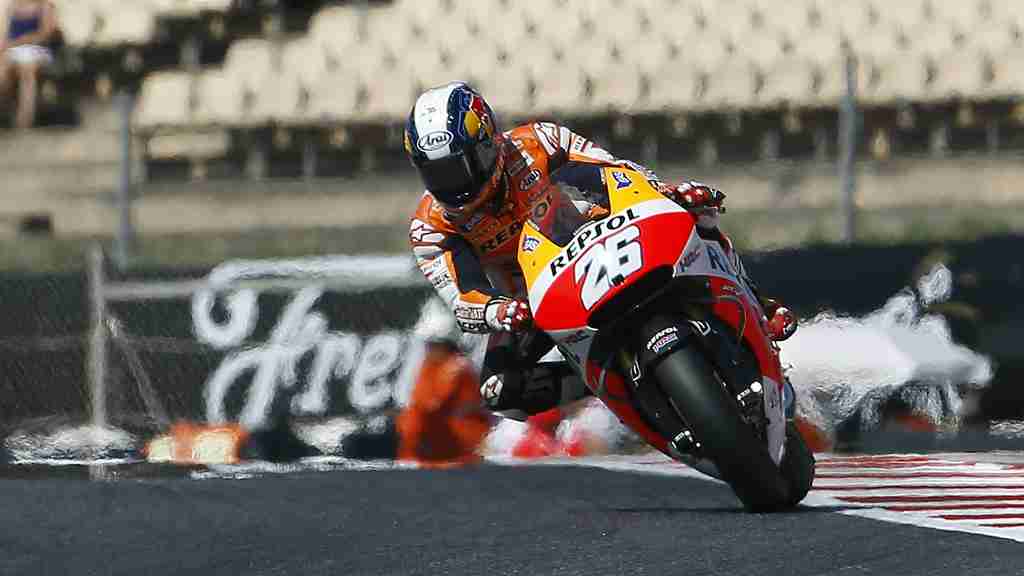 Dani Pedrosa claimed pole position at the Circuit de Barcelona-Catalunya for the second year running, after the Repsol Honda rider set a time of 1’40.985 to lead an all-Spanish front row at the Catalan Grand Prix. On another hot day where track temperatures reached over 50°C, Pedrosa kept his cool to claim the front slot on the grid from Yamaha Movistar MotoGP’s Jorge Lorenzo by just 0.115 seconds. Completing the front row was Repsol Honda’s Marc Marquez, who crashed while chasing his seventh-straight pole position but still managed to clock the third quickest time of 1’41.135. All riders on the front row used the medium compound slicks front and rear during their time attack in Qualifying Practice 2.

The peak track temperature today of 54°C was recorded during Free Practice 4, with today’s objective for the teams being to find a tyre combination that could tame the greasy track conditions brought on by the scorching temperatures. With grip hard to come by from the track surface, the riders looked for maximum grip and stability from their tyres, and as a result, the medium compound front slick was preferred by almost every rider. Rear tyre choice for the race also became clearer after today’s practice sessions, with the Factory Honda and Yamaha riders, and the majority of the Ducati riders almost certain to race the medium compound rear slick. Most of the Open-class riders look set to choose the soft compound rear slick for the twenty-five lap Catalan Grand Prix. Weather forecasts indicate a high probability of rain tomorrow, and tomorrow’s Warm Up session at 0940 local time (GMT+1) may be the only opportunity for the riders to assess the circuit in wet conditions before the race commences tomorrow afternoon at 1400.

“I am very happy to have taken pole position today, in front of my family and the home fans! I am also delighted that, for the first time this year, I felt good on the bike in qualifying. I’ll try and get a good start from pole position tomorrow, I am sure that it will be very hot and we will have to manage the tyres well during the race, but we will try to do as well as possible!”

“Today I made the first mistake of the season, so I need to apologise to the team because it was my fault. The strategy we had set out was coming together perfectly, but when riding with the last tyre I braked too late. I knew it was my last attempt, so I tried to go into the corner anyway. That was not the best choice; I should have written off the lap, but these things happen when you are riding at home; you always try to give a little bit extra. We know for tomorrow that there is no more room for improvement on that corner and that we have a good setup with which to fight for the win.”

“I made a very good lap, I risked a lot, especially in the braking to make it. Finally we made a good setting for this track, it’s hard because with the track and temperatures it’s hard to make the bike stable. Tomorrow we will try to make it even more stable. We hope to remain consistent and strong like in Mugello to fight for the win again. We all hope it doesn’t rain because a wet race would be difficult to judge. It would be great to win, everyone wants to!”

“I’m quite satisfied with this afternoon’s result because the target was to stay in the top 5 and I am there at last. For sure the front row is always better and makes things easier but the three Spanish guys in front have showed to be very strong. They have a great pace whilst mine is not at their same level at the moment. Later today and tomorrow morning we’ll try hard to improve the bike and stay with them, hopefully closer than we are today. As for the tyres for the race, I guess everybody is going to use the medium rear tyre, while the choice for the front is still open and will depend on tomorrow’s temperature and weather conditions.”

“Although I’m not where I want to be and a little frustrated I still feel positive for the race tomorrow. We tried a few different settings on the bike in which some worked better than others and I consistently went faster in every session which of course is a big positive. This was despite the fact that in the end it wasn’t quite enough to get to the front. I wasn’t too confident with the turning of the bike and it felt like I had my elbows buried in the ground! This is something we will look to work on tomorrow morning during the warm up. In the race I aim to get a good start then push as much as possible especially during the first laps, so that I can try to follow the leading pack for as long as possible.”

“I can’t be satisfied with our qualifying performance today. We struggled the whole weekend in one sector of the track, where we are losing more time than in the rest of the lap and unfortunately we cant find a solution yet. But when I was behind Jorge during the last minutes of the session I tried to follow his line and we will check the data now to compare what might be best compromise. Of course starting from the 10th position will not make things easy for tomorrow but I will try to get a good start and keep my head down to offer a good show for my fans.”

“It’s been a big crash and now I’m sore, especially in the chest and right ankle, but fortunately nothing is broken. Today the feeling with the bike was better than yesterday, although everything is not yet in place as we would like: during the third free practice session we were not far from the fastest riders, and it was a shame not to be entered directly into Q2. In any case, we faced the Q1 calmly, then in Q2 I fell while I was on my first attempt, with the tyres already used in Q1. At least I had time to get back on track with the other bike in the end, in order to forget soon what happened. As I said we are not one hundred percent but I am confident for the race, because our pace is not very far from that of the other riders. We’ll have to keep an eye on the weather, and in any case we will give our best, as always”.

“I’m really happy with my qualifying time; it’s only a shame we couldn’t get into Qualifying 2, but we knew we have a big disadvantage here with two long straights. Anyway, now we need to work for the race: we want to try and collect a few more points for the championship. Today we have been the fastest ‘Production Racer’ Honda, which is still our target, and now we want to make the same thing tomorrow in the race. Unfortunately we don’t know yet if we can use the softer tyre: it could be difficult, so maybe we have to use the hard tyre for the race distance. Hovewer, we will give everything and we will se how it goes”.

“I am very happy with my time, because I did a really good lap. This afternoon it was really hot and it wasn’t easy to set such good times. Unfortunately I’ll be starting from the third row, I just missed out on the front row by a few tenths! Luckily we’re all pretty close together, and I don’t have such a bad race pace either. We know the race will be tough and doing 25 laps in this heat will be very tiring, but I am satisfied because together with my team, we worked really well this weekend.”

“Qualifying was obviously very disappointing. I was unable to make a good lap time, and I am way too far away from Andrea, but also from Yonny Hernandez, who with his GP13 made a very good time. For sure we need to improve if we want to get a good result in tomorrow’s race.”

“Even though the weather was a bit hotter than this morning, in the afternoon I still managed to improve my time and verify that the bike was working well with the new electronics strategies we were trying. I am quite happy because my feeling with the GP14 was much better. We have prepared as well as possible for tomorrow, hopefully we can have a good race.”

“Today was a difficult day, we were not able to find the solution of the problem. unfortunately I was not able to enter directly into QP2, and because of this, we had a tire in less for qualifying to and this penalized me a bit. I’m quite confident for tomorrow, there are riders in front of me who have a slower pace than mine. Tommorow will be a difficult day; I do not think we can find a solution to the problem but I will do my best to bring home valuable points for the championship. “

“I’m really pleased with the results of these two days. We managed to stay consistently in the top ten throughout the weekend. The results we are getting are the thanks to work that begun earlier in the season and now I’m able to ride with more experienced riders is a great outcome for me and my team. I want to thank the whole team, in particular, Francesco and Giacomo for putting in my hands a more competitive bike. After all the work done in these days I hope to finish the race in a good position. “