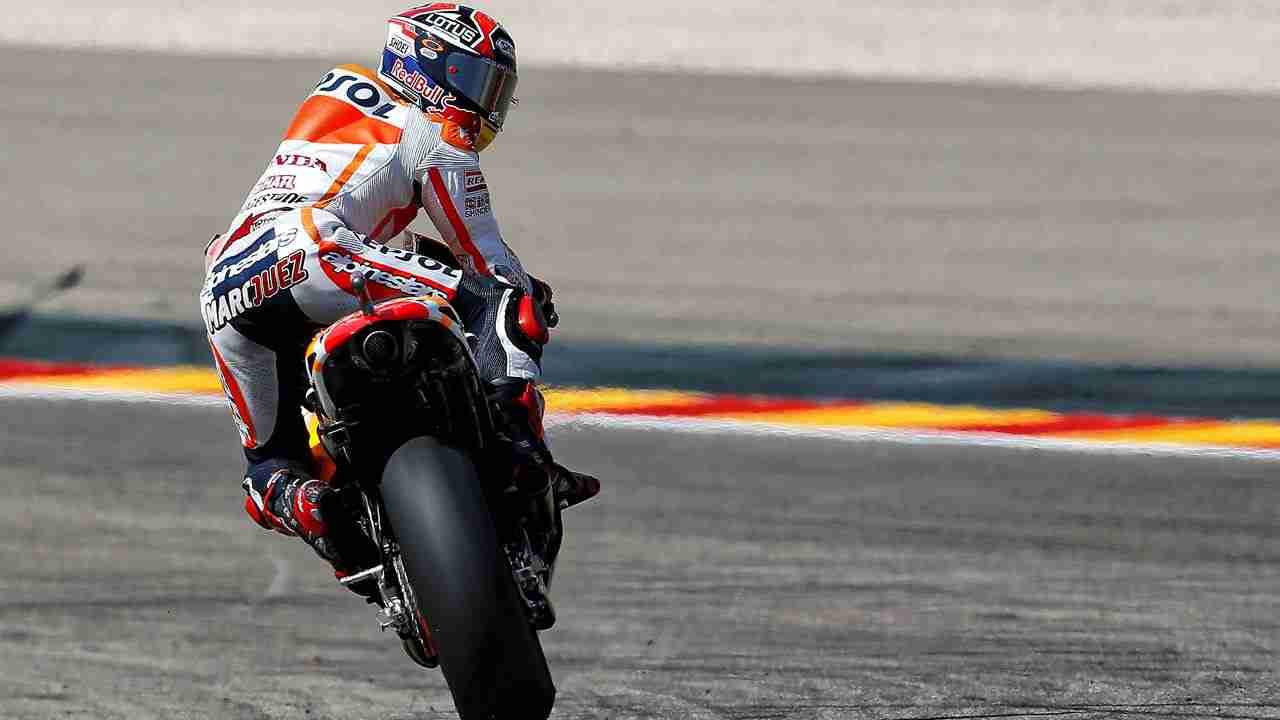 Marc Marquez smashed the Motor Land Aragon Circuit Best Lap record by over half a second for his eleventh pole position of 2014, and helped to secure a Repsol Honda lockout of the front two grid slots at the Aragon Grand Prix. Marquez set an extraordinary lap time of 1’47.187 on his final run in Qualifying Practice 2 to claim pole position ahead of teammate Dani Pedrosa, whose best time of 1’47.549 was 0.362 seconds adrift of the 2014 World Champion. Pramac Racing’s Andrea Iannone fully exploited the extra grip on offer from the soft compound rear slick to set the third-quickest qualifying lap time of 1’47.685 and claimed the final front row position for tomorrow’s race.

It was another cool morning at Aragon, yet prolonged sunny weather helped raise track temperatures to a peak of 38°C during QP2; the same peak figure as yesterday. In a similar situation to yesterday, all three asymmetric rear slick options; the soft, medium and hard compounds were evaluated today. The hard compound rear slick was preferred by most of the Factory Honda riders; the medium rear was the tyre of choice for the Ducati and Yamaha riders, while the soft rear was best suited to the majority of Open-class entrants. For the front tyre, both the soft and medium compound slicks showed good potential during race simulations and qualifying, with the hard compound front slick remaining unused thus far this weekend. At this stage, race tyre choice is still open as the teams and riders will wait to see what the weather brings tomorrow, with cooler temperatures and even rain a possibility. Sunday’s morning Warm Up session is scheduled for 0940 local time tomorrow morning (GMT +2), giving the riders one last chance to decide on their race tyre combination ahead of the twenty-three lap Aragon Grand Prix at 1400.

“Qualifying went very well, continuing the form that we have had so far this weekend! We have focused a lot of our work on our race pace, looking less at setting a one-off lap time and more at finding a strong pace. Things are looking good for the race, although Dani also has a very good pace, so we’ll have to see tomorrow!”

“Today we had a good qualifying session. In other races we have had difficulties because we haven’t started from the front, but today we managed to set a good lap. I think that the practice sessions also went well for us, and tomorrow in the race we will be as competitive as possible. Marc is setting some very good times, so we will try to fight for the win against him! It will be important to get a good start, although the race is long and the pace will play a big part, so we will have keep our concentration on every corner.”

“From the very first practice this weekend I had a good feeling on the bike and to score a 4th position in qualifying is definitely something we have to be happy about. I didn’t make things easy for myself as I was very nervous during my first run, probably because I knew that I should have been faster than some of the other riders, so I pushed too much and didn’t feel too comfortable with the rear tyre. During the pit stop we made a small modification and I calmed myself down, so when I found myself behind Pedrosa on the out lap I was sure we could do a good job. To start on second row is really positive but we still need to continue working as the conditions tomorrow will change a lot. For sure the temperature and grip level will be different so we have to be prepared to fight with the factory bikes. In any case I will give it my all to please the crowd here in Spain.”

“A difficult practice yesterday and also today as we are suffering from a lack of grip. It’s difficult to ride the bike at the limit as after some laps it starts to slide a lot. We worked very hard with the team to try and improve some different settings. It looks like this afternoon we found some things so I will start from the second row, which is not so bad, it’s quite good. Now we have to try to find some small improvement for the warm up and for the race so we can try to do the maximum tomorrow afternoon. The big question mark is the front tyre, we can use medium or hard. They are very similar so we have to see what the track temperature will be.”

“It’s unbelievable how in just two weeks everything can change just for the track. It’s true that this year we have even more difficulties to be competitive here. I’m very disappointed because today we got two wrong tyres for the rear. They were not good. One was defective in the morning and the second tyre in qualifying was also not good. I expected to improve four or five tenths but I couldn’t, improving by just one tenth. When you have more difficulties sometimes you get even more problems as happened today. I think our pace is not that bad compared to our grid position so if we can make a good start and be patient we can fight. The first two corners will be difficult, then little by little we can make some positions and fight for the podium.”

“After a truly positive and productive day it is of course disappointing to finish the qualifying in this manner. At the end of my out lap in preparation for my second run, I was looking for someone to follow like Valentino, Pol and Bradl who were all behind me and I thought getting a tow would have helped me to squeeze an extra tenth or so. Unluckily I did not consider that there were a lot of right handed corners at that point of the circuit and after changing to a left corner, the tyre was slightly cold and I had a big highside. However the day was still positive regardless of the end result as we worked on the setting and electronics in order to preserve the tyre as tomorrow it will be a tricky race and tyre life seems to be the main issue here. It’s a disadvantage to start that far back but I believe in terms of the lap times, it will be close and there’s a long way to the finish flag. I know how vital a good start is, especially with the short run to the first corner and even though I will have to pick my way through the field, I am still confident for the fight.”

“I like this track a lot and I expected to be more in front here. It’s a pity that we couldn’t use all the potential of the soft tyre as my fast lap was spoiled by Hector Barbera, who was in front of me. He entered the pit lane without signalling it and I almost crashed. Anyway, I’m confident with my pace as we made a step forward in terms of set up with the race tyres. Considered that I’m starting from the 4th row, the race will be more complicated and it will be crucial to make a good start and recover some positions from the first laps”.

“Obviously I’m more pleased with today’s result than over the other weekends. We managed to qualify on the second row, which is the best result since Assen for me. Hopefully we can get away with the other guys tomorrow and have a better race. I think we deserve it, because it was a fantastic job by the team today in the qualifying session for me to be so fast, but we still have to work a lot on the race pace and the set-up. It’s going to be a tough race tomorrow, because the tyres drop a lot, but I’ll try my best to get a strong top 10 finish.”

“It was a real pity, because in FP4 we had good pace, and I think I can say now that we are a lot closer to the top guys also for race pace. I was sure I could do a good qualifying session but I lost the front at turn 8 in a rather strange crash. I don’t think I did anything wrong: it was my mistake but I don’t think I exaggerated that much, maybe we’re a bit too close to the limit at the front. We’ve got to work to improve this tomorrow because otherwise in the race I won’t be able to push that hard. Today however we did a good job and we’ve got good race pace.”

“This morning I crashed twice and I lost a bit of confidence and this affected also the qualifying session. Moreover I was slowed down by Di Meglio during my fast lap. Anyway, I have the pace to fight with the other open bikes and this is my target. Regarding the pain, today I could manage it, but I didn’t do too many laps in a row. The race will be long (23 laps) so I hope to be able to manage it in the best possible way”.