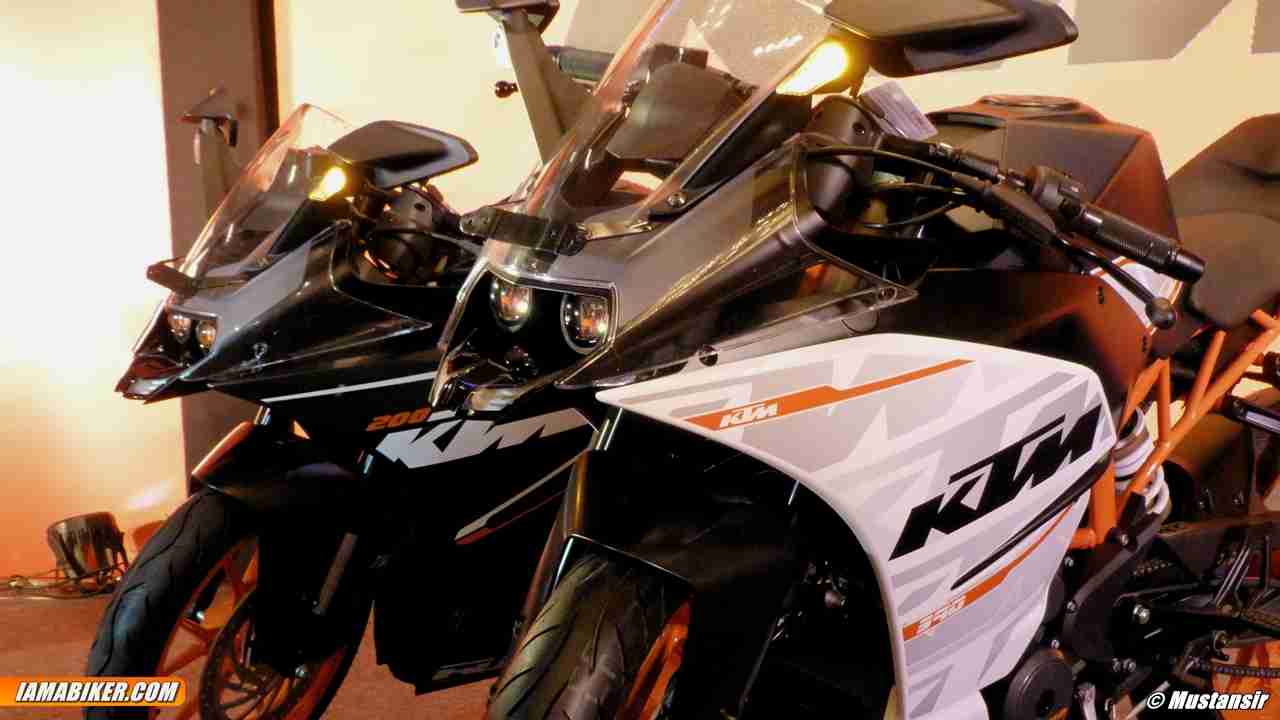 As promised last year during the Duke 390 launch, KTM launched the RC series bikes on 9th September 2014 in Pune. Present for the launch was Mr. Stefan Pierer CEO KTM from Austria along with Mr. Rajiv Bajaj MD Bajaj Auto Ltd. And Mr. Amit Nandi senior VP Bajaj Probiking. Mr. Pierer opened the proceedings telling us about KTM in the internantional market, they are currently the top European motorcycle manufacturers with annual sales of 140,000 units being sold abroad, not including the Indian sales figures. Their plan for 2020 is to achieve 250,000 units out of which 100,000 units are expected to be from the Chakan plant, making KTM the biggest manufacturer in the world, pipping their closest competition from Japan.

Mr. Nandi took over the proceedings and gave insights to KTM in India, the current segment in the Indian market is growing at around 10%, but KTM has been recording growth of 46% this year. They hold 75% market share in the premium motorcycle segment in India. Winning awards has become a matter of habit for KTM with the previous Duke 200 and then the Duke 390 walking away with almost all the accolades in their respective years.

Coming to the RC (Race Concept) series, the DNA for the bike comes from both the 1190 RC8 R and the RC 250 GP (The Moto3 bike). 5 out of the 8 teams in the Moto3 are running KTMs. Experiences from the track have helped mould the RC 200/390 and KTM strongly believe that you can get the bike out of the showroom, ride it to the track and win……. they are truly Ready To Race.

The engine is the same as the Dukes, the figures remain the same with the bike making 43.5 PS and 35 Nm torque from the 373.2cc mill though the bike weighs a bit more than the Duke at 166 kgs. This gives it a power to weight ratio of 262ps/tonne. The superlight liquid engine has a Nikasil coated cylinder with a single piece forged crankshaft and boasts a fuel injection system by Bosch.

The 199.5cc engine makes 25 PS power with 19.2 Nm torque weighing in at 154 Kgs. The frame is an all new trellis design which uses the engine as a stressed member and has a reduced rake angle which means a shorter wheel base as compared to the Duke leading to more aggressive handling. The 43mm WP upside-down forks are the same that are seen on the 1190 RC8 R and a mono rear shock absorber from WP. The die-cast aluminium swing arm is the same as the Duke.

The twin lights have projectors (the first in the class) with unique LED DRL (day-time running lights) that for the Indian market, can be turned on or off as per the riders discretion. The sporty rear end is equipped with LED tail lamps. The pillion seat is “integrated” which gives the look of a single seater, but can be used by a pillion. The aerodynamic windshield along with the fairing with matte finished tank cover and sides gives the bike a premium look. The clip-on handlebars not only look good, but greatly enhance the handling making the bike more nimble for those days at the track. The underbelly exhaust lowers the centre of gravity and also protects the rider and pillion from burns. The Bybre disc up front have ABS as standard fitment on the 390, while the 200 will not have the ABS option. The cockpit is well eqipped just like the Duke with around 32 functions.

The RC 200 and 390 share the same chassis apart from the ABS missing on the 200 and MRF tyres as opposed to the soft compound Metzelers that the 390 is equipped with. Customer feed back has urged the company to replace the brake and gear pedals for the RC to forged pieces (previously casted). The airflow from the radiator, has been re-directed to the underside of the bike with shrouds (previously was to the sides and onto the riders legs) The alloys however remain unchanged.

The Q&A session revealed that 1/3rd of KTMs production comes from India, and that 65,000 units are produced at Chakan (40,000 units exported) with parts 95-98% locally sourced. The 1050 Adventure will be unveiled in Milan in 2 months and will mostly come to India via the CKD route. The possibility of a completely Indian made Adventure with a smaller engine was not ruled out, with the possibility of Motocross bikes being sold here as well. Taxation laws mean that KTM will stay away from the CBU route and any of the bigger bikes, will come in as CKD units only. The 390 compared to the Ninja 300 and the 200 compared to the CBR250, CBR150, R15 and FZS-Fi show promising figures and will surely liven up the market with an all new twist. RC 200 priced at 1.60lakh and the RC 390 priced at 2.05lakh (ex- Delhi) will ensure that there is a beeline for the showrooms when bookings open on today with a booking amount of 30,000INR. Deliveries are expected within 90 days.