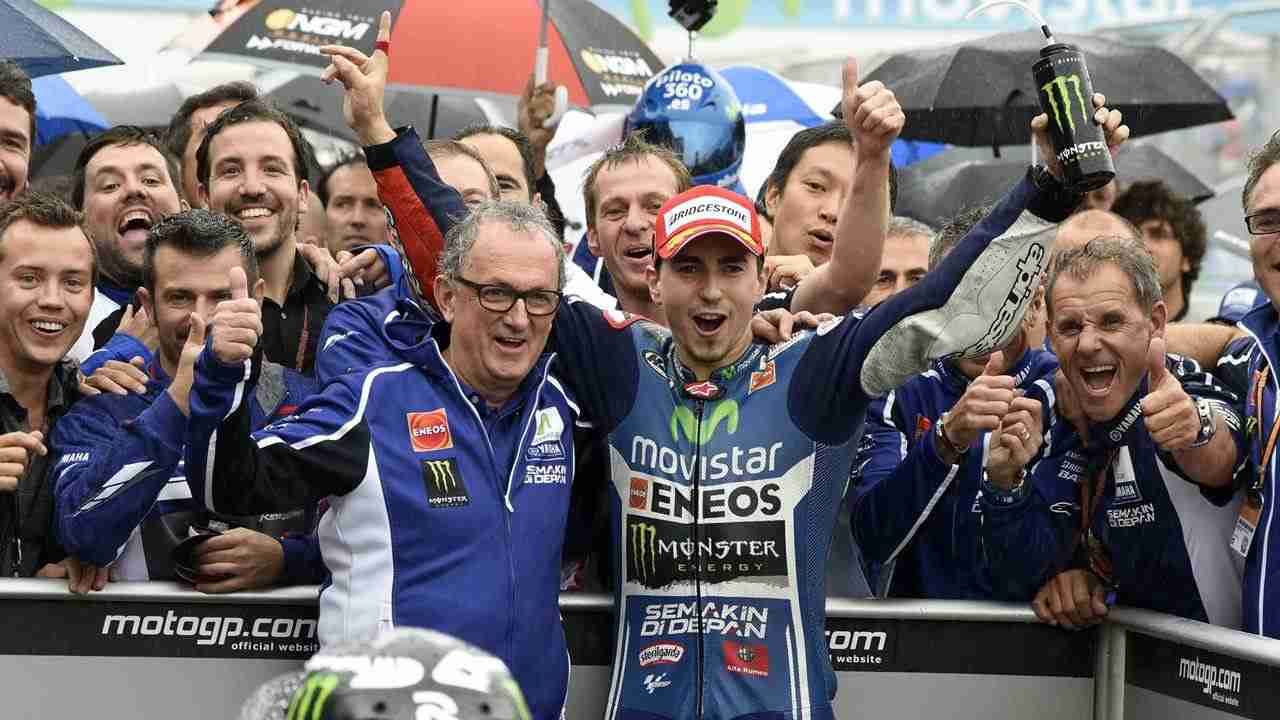 In an eventful flag-to-flag race at Motor Land Aragon, Movistar Yamaha MotoGP’s Jorge Lorenzo showed superb pace in both wet and dry conditions to take his first victory of the 2014 MotoGP season. Starting from the third row of the grid, Lorenzo got an excellent start and was engaged in a three way battle for the race lead with the Repsol Honda’s of Marc Marquez and Dani Pedrosa. In the middle phase of the race, light rain started to fall which then intensified, changing the track conditions from dry to fully wet in a matter of a few laps. Lorenzo made the decision to pit earlier than his closest rivals and swap to his spare bike fitted with wet tyres. He then proceeded to lap at a strong pace in the wet conditions, just as both Marquez and Pedrosa came unstuck in the wet as they persevered on slicks. Lorenzo then streaked away to take victory by 10.295 seconds from NGM Forward Racing’s Aleix Espargaro who claimed his first ever MotoGP podium finish after a brilliant ride to second place. In third place was Ducati Team’s Cal Crutchlow, who despite a valiant battle with Espargaro for second place, ultimately crossed the finish line just 0.017 seconds behind the Spanish rider to claim the final podium position.

Conditions at the start of the twenty-three lap Aragon Grand Prix were completely dry, with all riders initially selecting slick tyres. Although conditions were considerably cooler than yesterday – the peak track temperature was only 23°C – only seven of the twenty-three riders selected the soft compound front slick, with the remaining sixteen riders choosing the medium compound front. For the rear tyre, both Repsol Honda riders and LCR Honda’s Stefan Bradl opted for the hard compound rear slick, with the remaining Factory Ducati, Honda and Yamaha riders selecting the medium compound rear. For the Open-class riders, half the riders opted for the medium compound rear slick, the other half for the soft compound rear at the start of the race. Both the hard and soft compound wet tyres were used by riders in the final stages of the race after they changed bikes, with the hard compound wet tyre being used by two-thirds of the field, including the three riders on the podium. Although he finished in thirteenth place at Aragon, Marc Marquez extends his championship lead over teammate Pedrosa to seventy-five points with four rounds remaining, while Movistar Yamaha MotoGP’s Valentino Rossi remains third in the championship standings and three points behind Pedrosa.

“It’s been a very crazy race, because we won at a track where we’ve never won and we’ve had a lot of problems all weekend. I made a really good start, my first lap was very good and I kept at the wheel of Marc. The bike was working very well and Marc was a little bit slower than in practice so I could stay with him and I passed him one or two times. The problem was it was spitting, so I didn’t have much confidence, I was very careful and the others were going away in front. Andrea was catching me and I thought I was going to be fighting for third or fourth position. But finally I had an intuition; every lap I felt the spotting was coming worse and it was very dangerous and easy to crash. When I saw Marc and Dani keeping on racing and without going into the pits in the last corner, I said ok, I will take a risk and enter. I changed the bike, the new tyres were very difficult to warm up, not so much grip but I tried to be very focused and not make many mistakes. When I passed the board on the straight I was in fourth position so I thought we are going to finish very far but then the next lap I was first! I was surprised; I didn’t expect to be first. Having this victory is a great relief for me after so many months of challenges and fights so I’m very proud.”

“It’s my first podium in MotoGP and this is an incredible feeling. We have worked hard throughout the season to get this result and I want to thank the NGM Forward Racing Team and my family that has always supported me. It was a difficult race, made more complicated by Smith who touched me at the beginning of the race, obliging me to recover from the 19th position. When I was 6th, with 7 laps to go, I took the risk to be the first rider to enter the pits to change bike, as it was raining a lot. It was a perfect strategy. In the last lap I heard Cal catching me, he touched me on the straight but I could defend my second position. It’s an extraordinary result and I’m going to party till Japan GP!”

“Obviously we got very lucky with the conditions, but it was the same for everyone so I don’t really care! I am pleased with the work that the guys have done, we are in better shape than what we were, even in the dry. A great job by Ducati, they haven’t given up with me and I haven’t given up with them and I think that shows week in and week out, even when the results haven’t been good. I got a wheelie coming out of the last corner because I hit the white paint, and I probably would have got Aleix on the line for second if I had been able to change gear in time!” 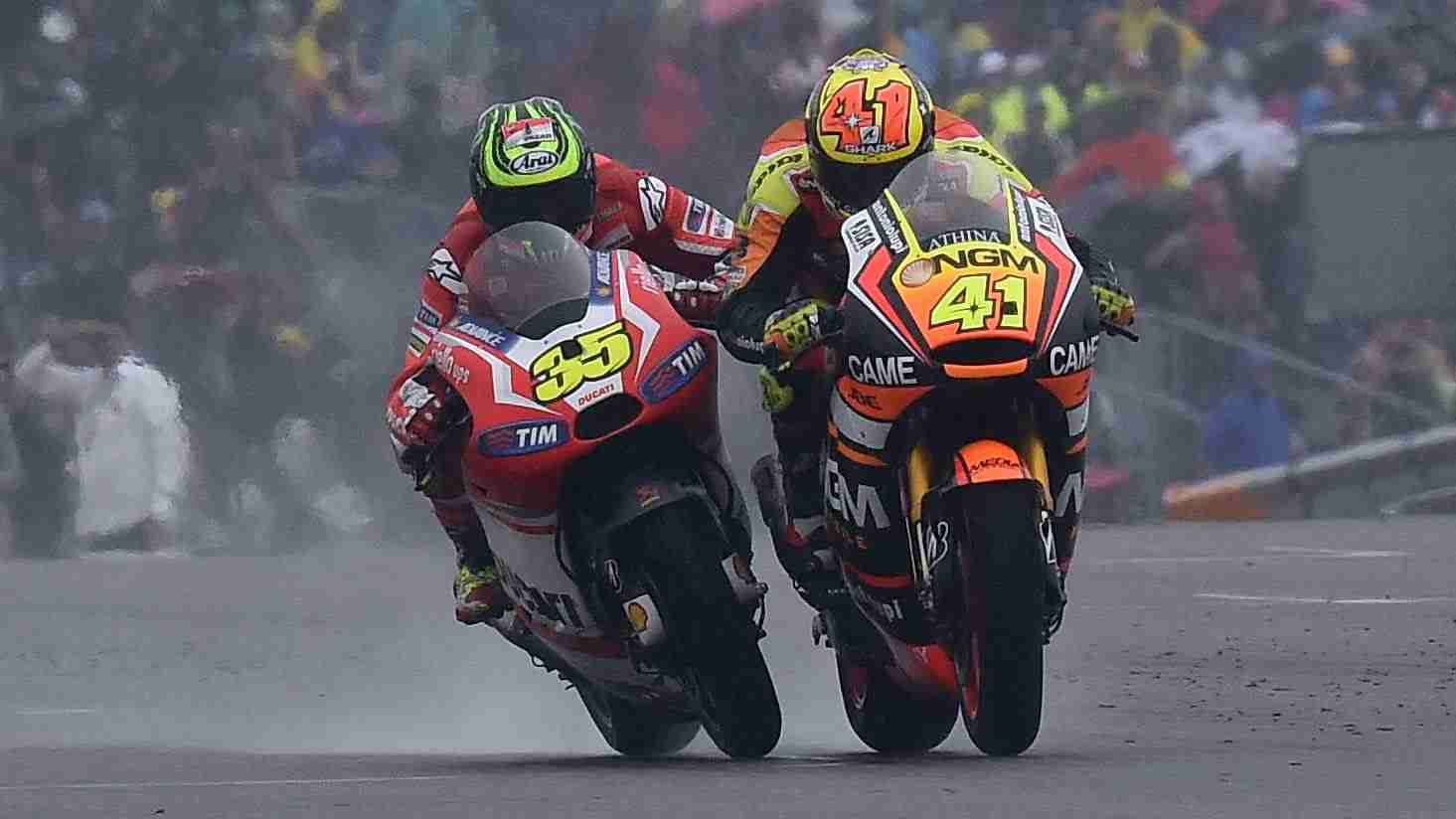