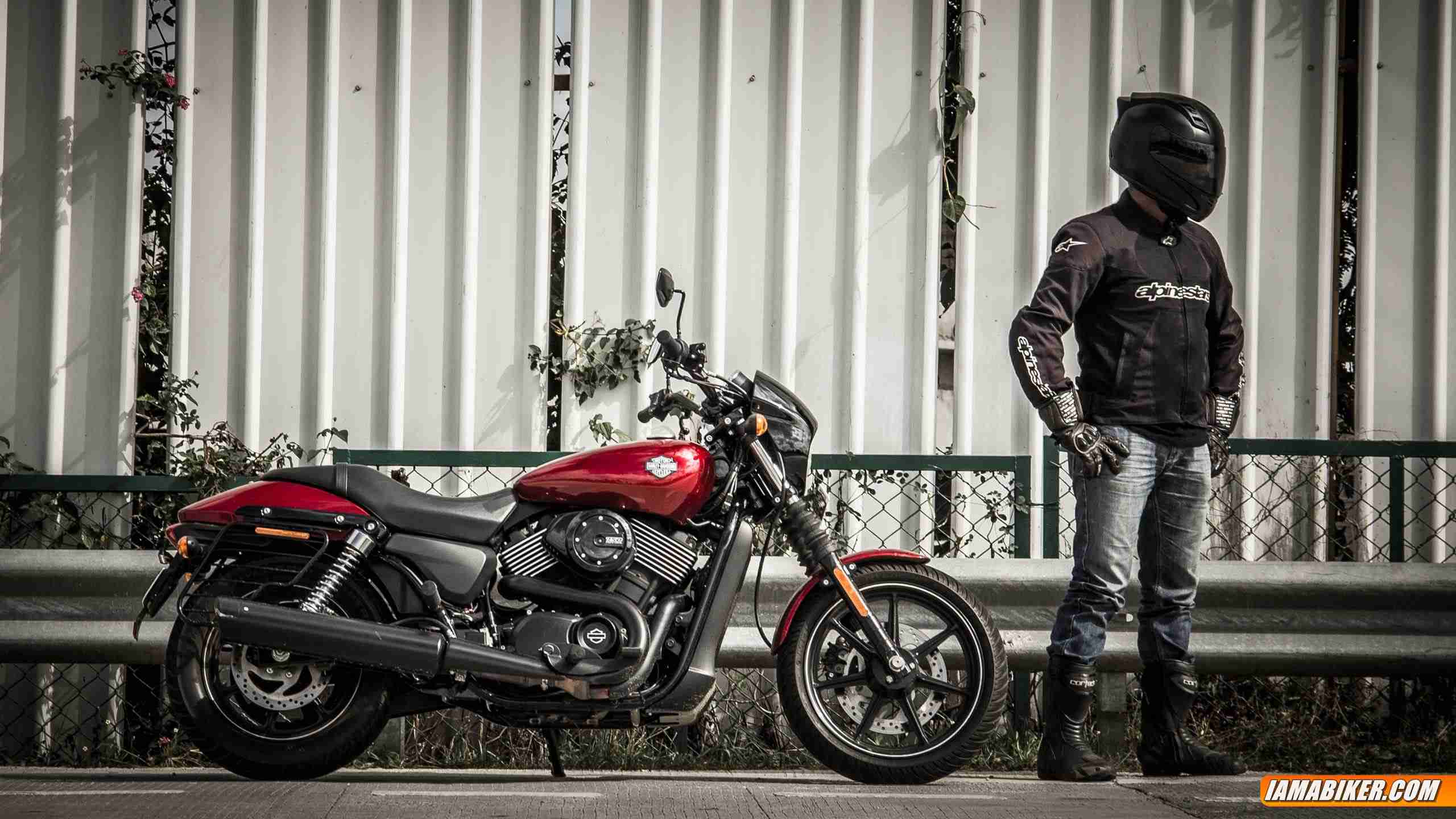 The Harley Davidson Street 750 is one cruiser that has really mixed things up. On one hand with its almost unbelievable pricing, it grabs the attention of almost everyone and makes them at least consider it when out in the market for a motorcycle, especially due to the Harley Davidson badge, and on the other hand it is that unbelievable pricing working against it. Does it mean there are compromises?

The Harley Davidson Street 750 is a very important motorcycle for the company. It is a completely new machine from them ever since the V-Rod, that’s almost 13 years! And of bigger importance is the fact that it is made in India, almost everyone east of the USA is going to be getting the Street 750’s made right here in India. Harley Davidson has a lot riding on this motorcycle especially in emerging markets similar to ours. So does the made in India Harley at an attractive price point provide the complete Harley Davidson experience? Read on. 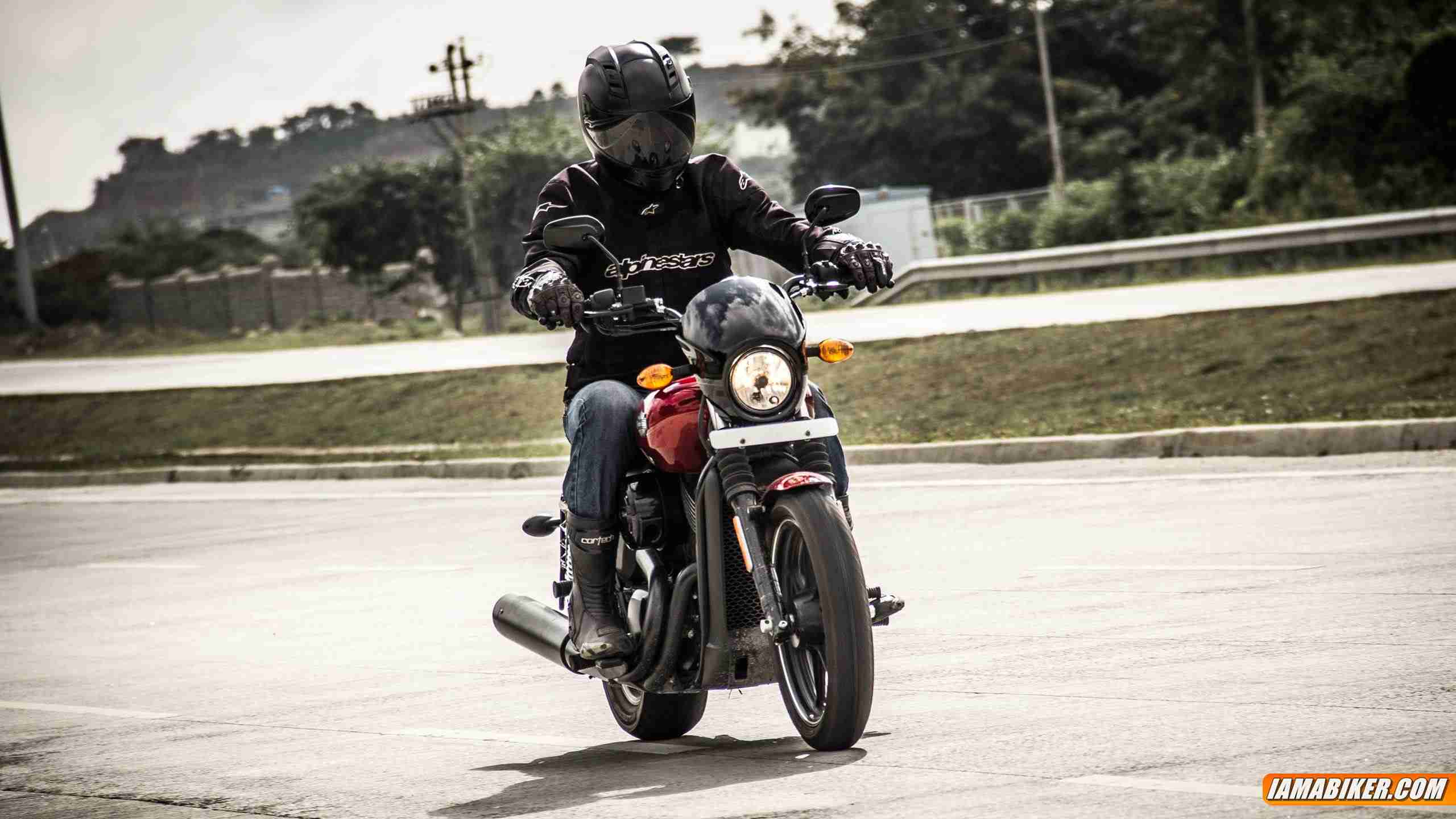 Harley Davidson has come up with an all new engine for the Street 750 called the Revolution X. It’s a 60 degree V-Twin that gets liquid cooling and has 4 valves per head. The important numbers are 57 HP of power at 8000 RPM and 60 Nm of torque at 4000 RPM. The engine sounds too mechanical due to the noisy timing chains, but performance wise it does not disappoint. It’s quite peppy and thanks to the low end torque you could survive the city traffic in 3rd gear without having to go all the way down and the Street 750 would pull away cleanly in almost all tight situations. The engine does get heated up and you need to watch out for the tricky spot near the rear brake pedal where the exhaust panel gets mighty hot, but that’s the only heat related grouse, the liquid cooling does a pretty good job. Even after prolonged city riding, things were pretty much sane under the seat where all the action was happening. Once on the highway, the Street 750 transforms into something that will bring a wide grin on your face. At highway speeds, slot in that 6th gear and everything changes, the Street 750 is now different, it’s a bit more relaxed, refined and in tune with the Harley feeling. The Revolution X engine is pretty interesting. The more we got to know it and understood how it performs, the more we appreciated it. Unlike the typical Harley engine, this one has a slightly more racier character, purely in terms of how it revs. The 0 to 100 timings of the Street 750 comes up in 7.1 seconds and goes on to a top speed of 165 kmph. But at 165 you are basically wrestling with the bike and struggling to hold on. The Street 750 is best at the mid range, basically at speeds from 80 to about 140, the response and the ease at which it can fluctuate within these speeds is beautiful. Fuel efficiency returned was pretty decent too, we got a mileage of about 20 kmpl in the city and 26 kmpl on the highways for the Street 750. 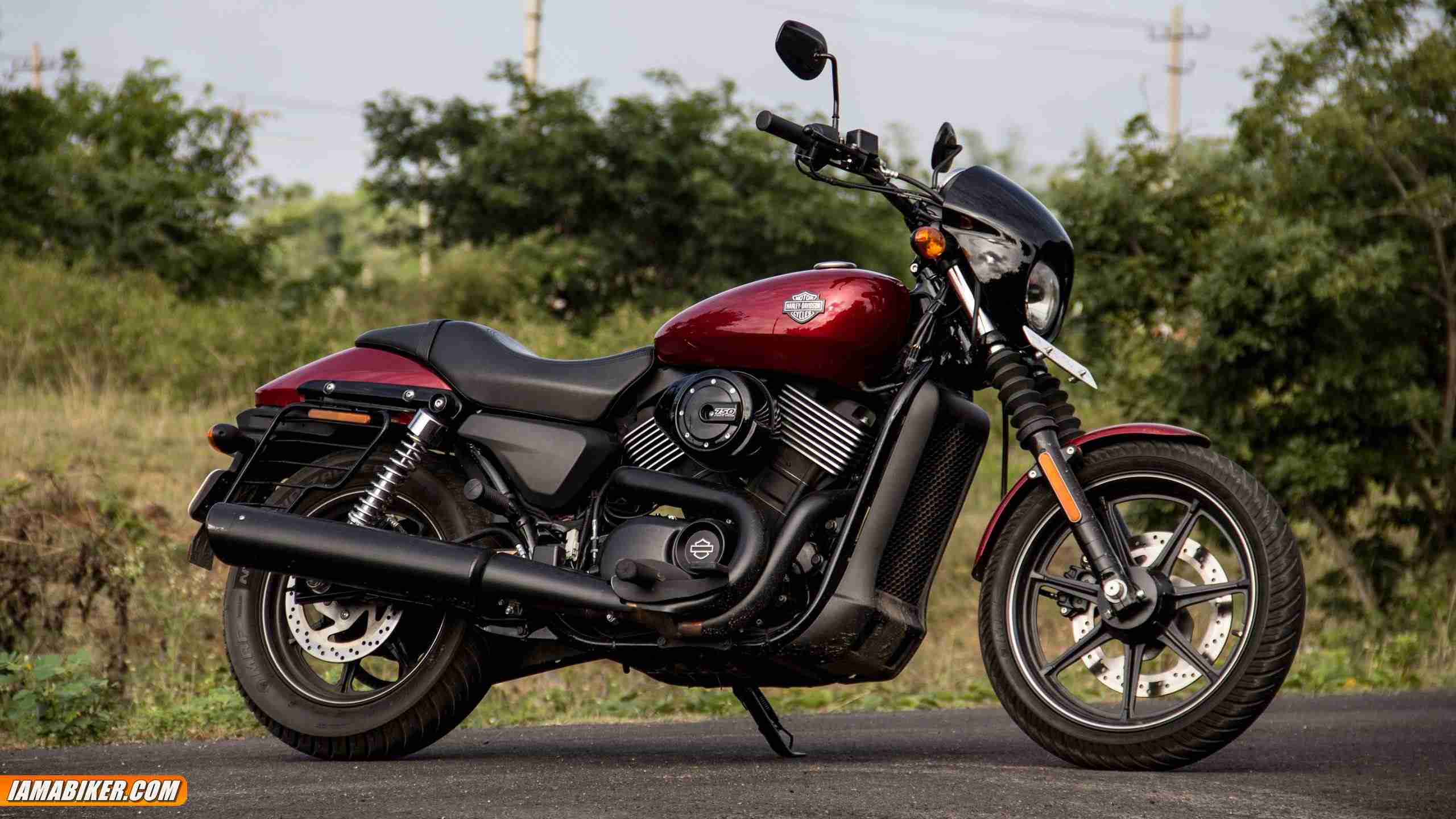 The Harley Davidson Street 750 looks every bit a big macho cruiser from all angles except the most important one, the front. You see it coming at you and you could easily mistake it for some very well known desi bikes. Maybe Harley wants to make you customize this and giving you like they said, a black canvas. Moving past that, yes, it does look really good especially from the rear three quarter view, where it looks just massive, a design that will remind you a lot of the iconic V-Rod. Once on the bike you are in a pretty good and relaxed riding position, low seat, the pegs are not too forward and your reach to the handle bar is wide and relaxed.
Coming to the build quality, it’s a whole different story. There are the good bits like the engine that seems rock solid, then there are the okay bits like the tank and the rear panels that are of decent make and then there are the bad bits like the switch gear plastic that seems flimsy and cheap. There were traces of rusting at some spots, but our biggest disappointment were the exposed wiring. Wires, by the bunch right behind the head light and exposed under seat near the exhaust, not what you want to see on something that carries a Harley Davidson badge.
Check out the walk around video below and for a detailed photo gallery visit the parts gallery. 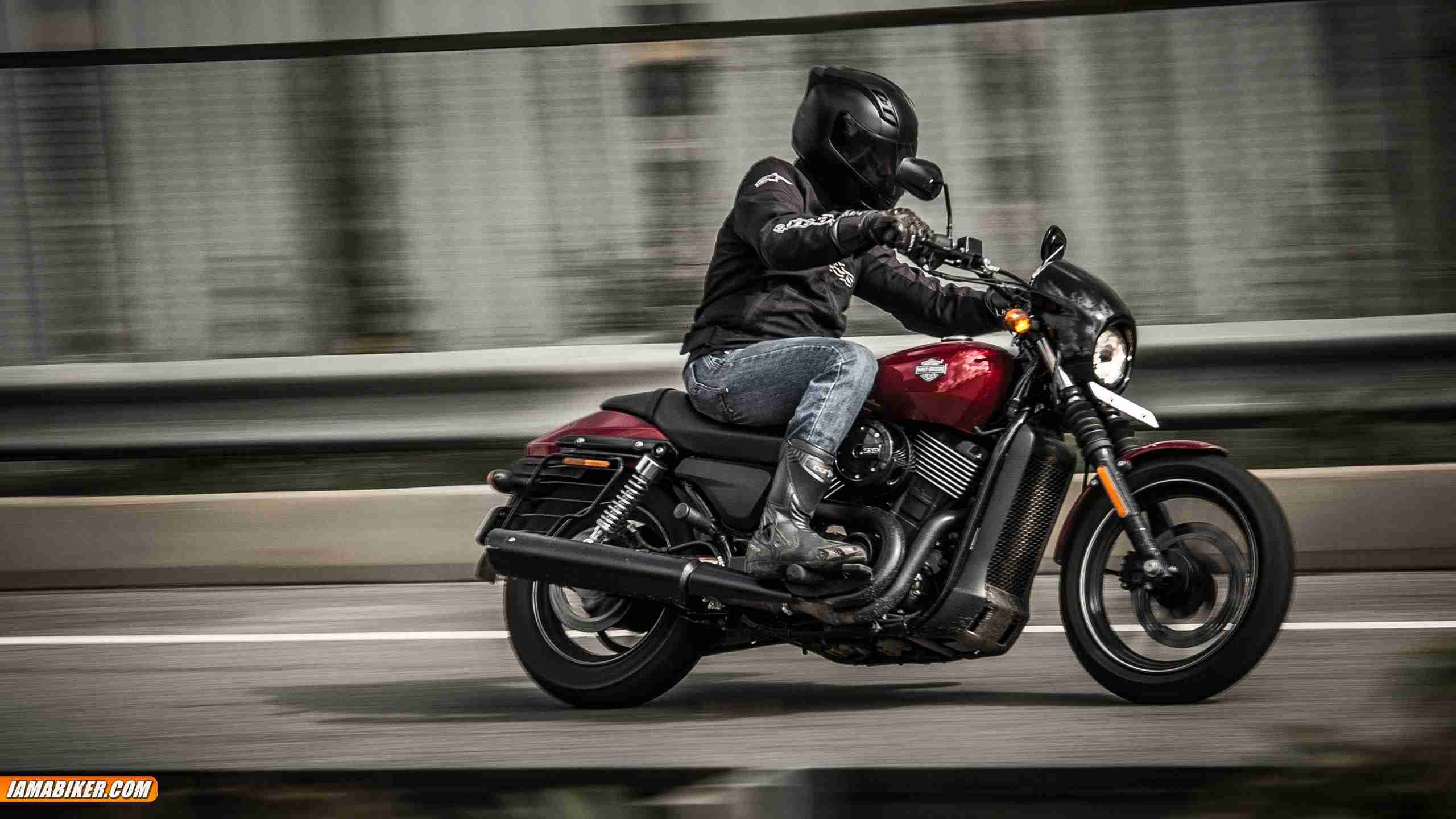 The Harley Davidson Street 750 can hold its ground probably better than any of the other Harley’s out there, be it at the street, the highways or the twisties, this Harley can really handle some serious spirited riding. It’s pretty easy to handle once it gets going. Even in the city it was quite easy to maneuver, except for obvious stuff like taking tight turns. Also the Street 750 is actually pretty narrow, which means you get to squeeze through those tight gaps easily. It handles well for a cruiser. Coming to the braking, it’s a mixed feeling, while we usually like a strong progressive bite from the front brakes, the front brakes on the Street 750 were rather soft and lacked a strong feel, nevertheless they did the job decently. The rear works good in tandem with the front but it does have the tendency to lock up under some moderate to hard braking, ABS is definitely missed. But to be completely fair the brakes did good and made sure we stopped in time. Even under the pressure of tricky city riding in rush hour and of-course some fun riding, we never really had it fault except for minor lock up situations under some hard braking. Then there is one key point that makes this Harley very friendly to our road conditions, the ground clearance. This Harley has a lot of it and never once did we encounter a situation where we scrapped the underbelly. Full points to Harley for that, definitely an outcome from the in-depth survey and feedback they did with bikers across the subcontinent before building the bike. 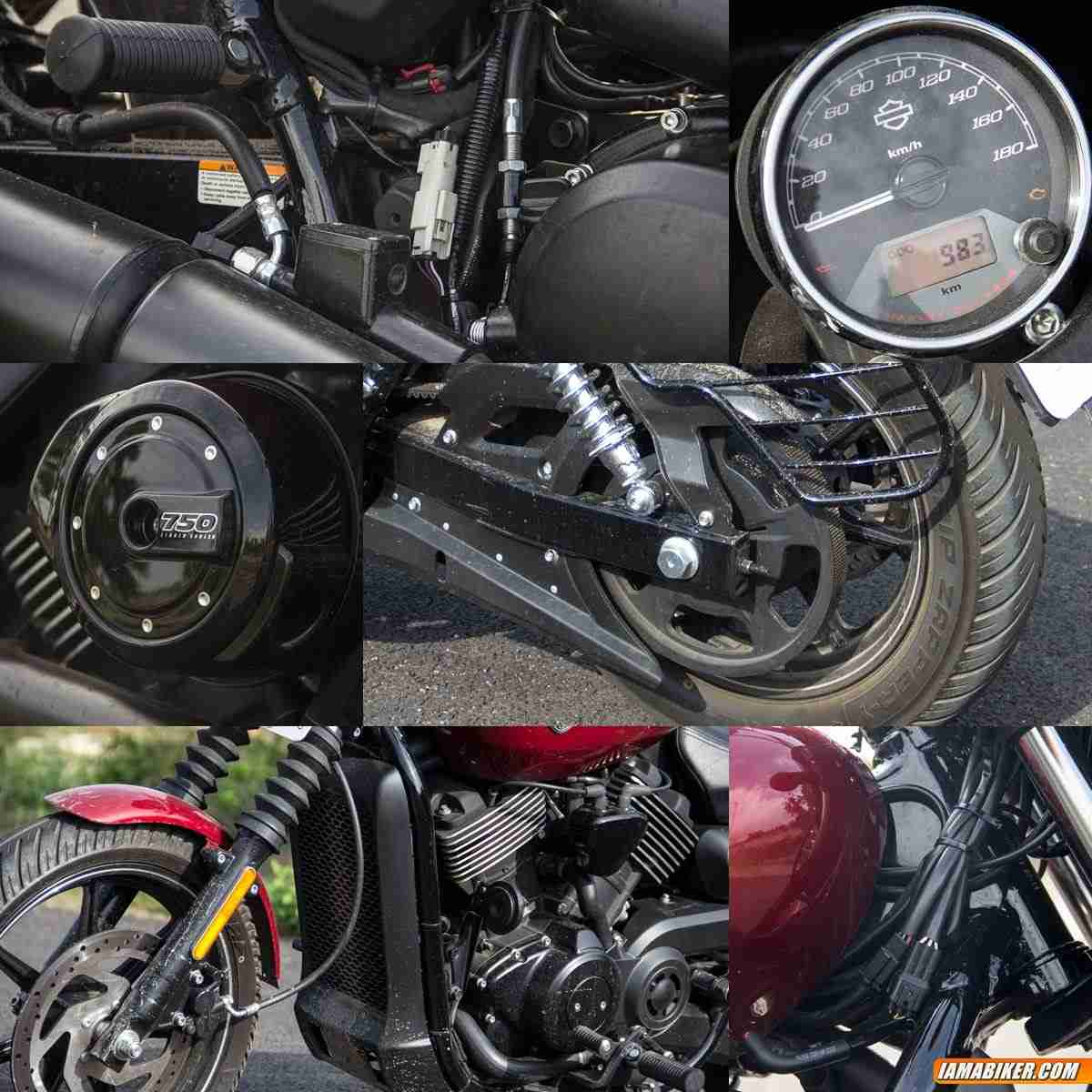 The biggest feature highlight of the Harley Davidson Street 750 will definitely be its engine, there is pretty much nothing else to boast about except for that its belt driven and not the conventional chain-sprocket system that we are used to, and yes it definitely is better in terms of life and maintenance. The instrument console is pretty basic and shows the speedometer with odometer, time-of-day clock, dual trip meter, low oil pressure light, engine diagnostics readout, RPM and turn indicator lights. And although there is a low fuel indicator, a proper fuel gauge would have been good. Headlights are pretty good, but like we said, that is one area that will receive a lot of attention from the Harley aftermarket parts catalog. The mirror placing could have been better, right now it’s placed pretty inward on the bars and you either see whats right behind or you see whats beside, not both. The front radiator is something that has been integrated into the design very cleanly, and although prone to some dirt building up — splash back from the front wheel, it definitely adds to the overall appeal. Then there are the small details that we think add a lot a buyer satisfaction, details like the well integrated saree guard, the reflectors on the forks and rear panels, the front fork covers and of-course the typical Harley branding on almost everything. And of-course the Street 750 is available in 3 color options, the one that you see here, Fire red, the Vivid Black and the Black Denim. 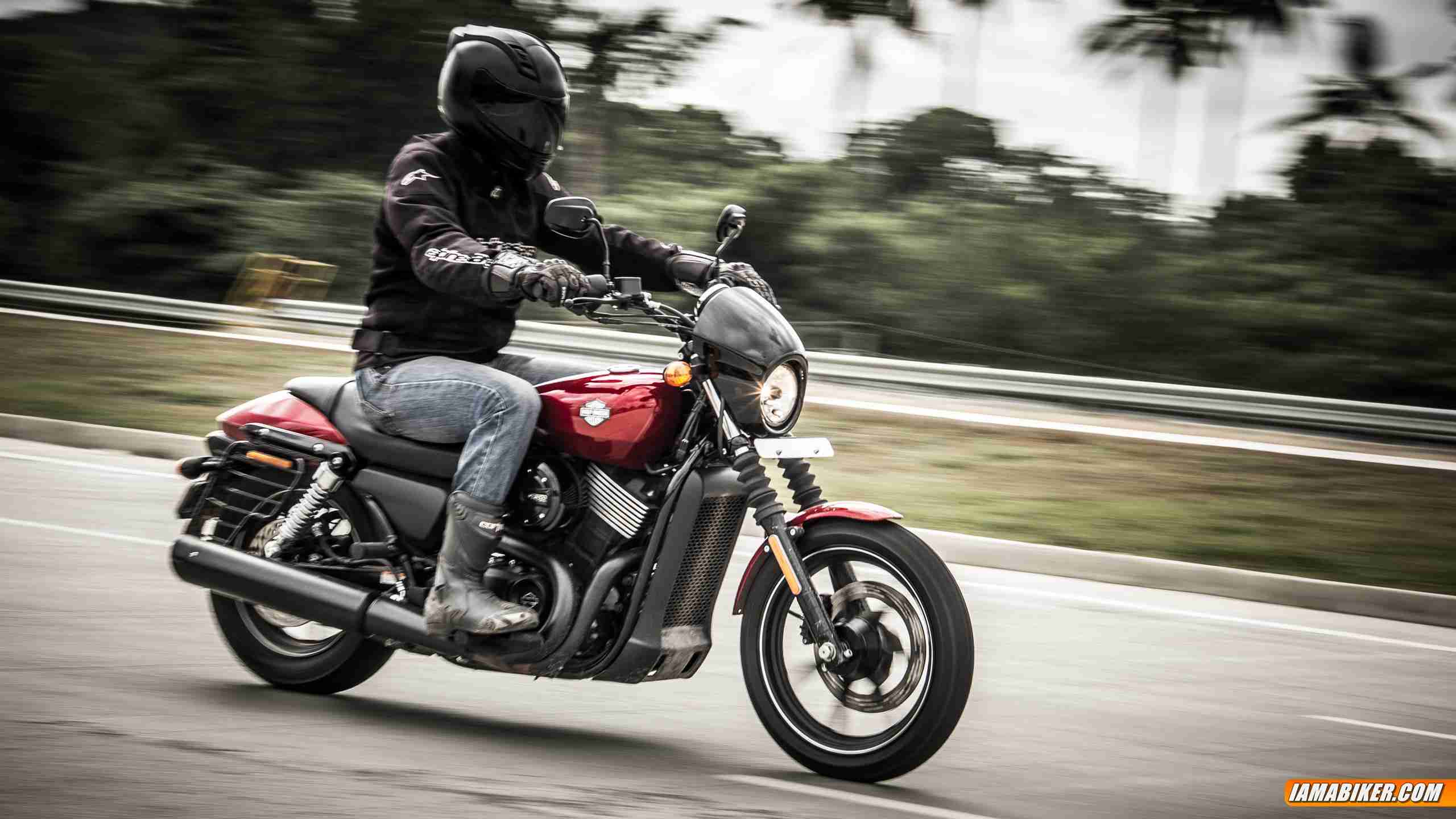 The Harley Davidson Street 750 is priced perfectly according to us, for 4.1 lakh ex-showroom you get a 750cc V-Twin and there is nothing that comes close. The spares cost might give you a small shock and service costs even with the made in India badge are at premium rates. But we still stick to the fact that the sticker price is something totally enticing and makes owning one ever so closer, a Harley for under 5 lakhs. 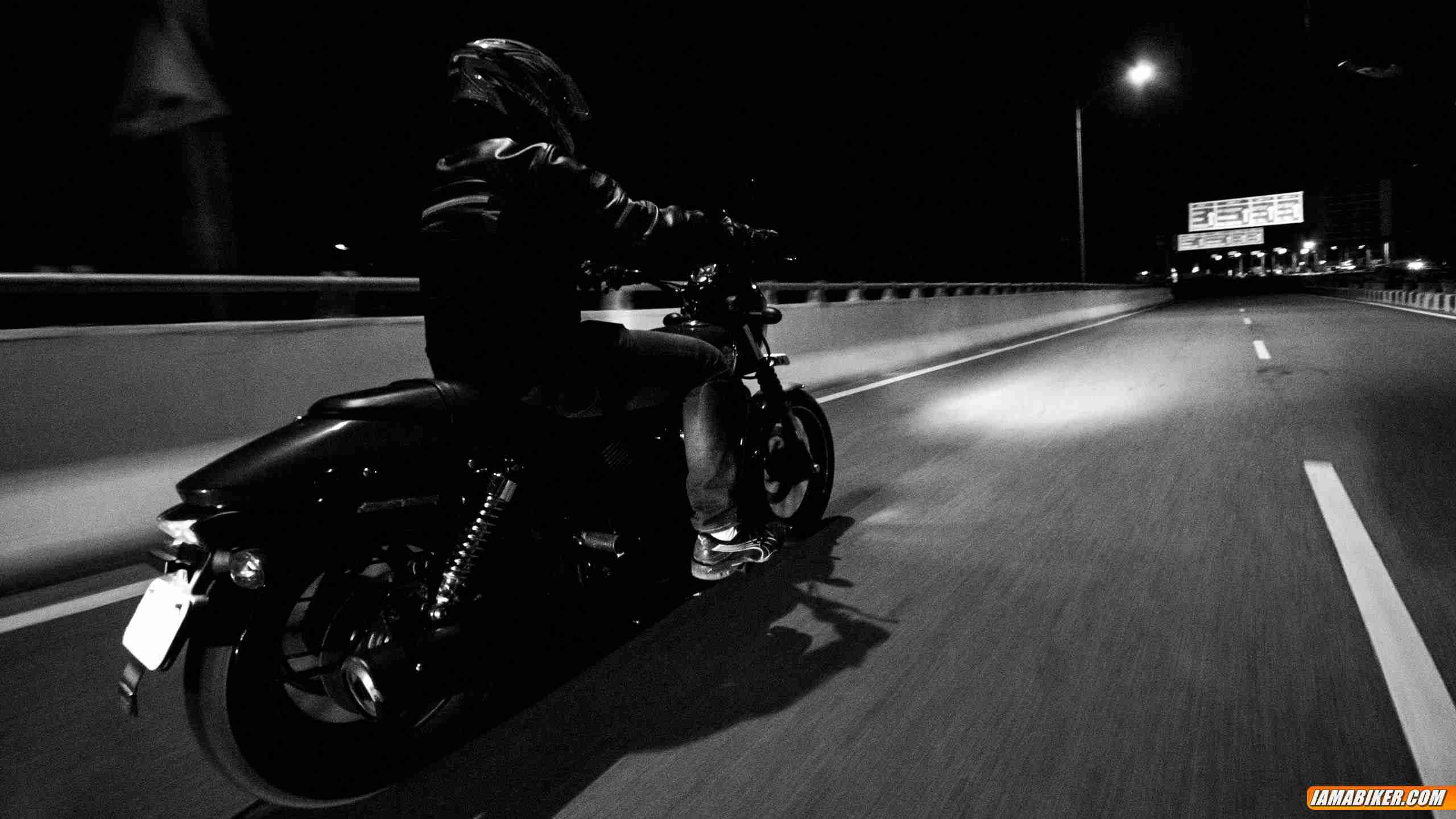 A lot of mixed emotions so far then? If you look at the Street 750 with the typical Harley mindset, then in all probability you will be disappointed, it lacks the attached glamour, finesse and most importantly the typical Harley sound. But if you look at the Street 750 for what it is right there in front of you, then you might appreciate it. A 750 cc V-twin of decent build quality at a very attractive price, a worthy upgrade from the existing group of cruisers available in India without making a huge hole in your pocket. 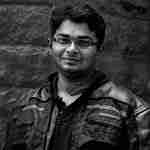