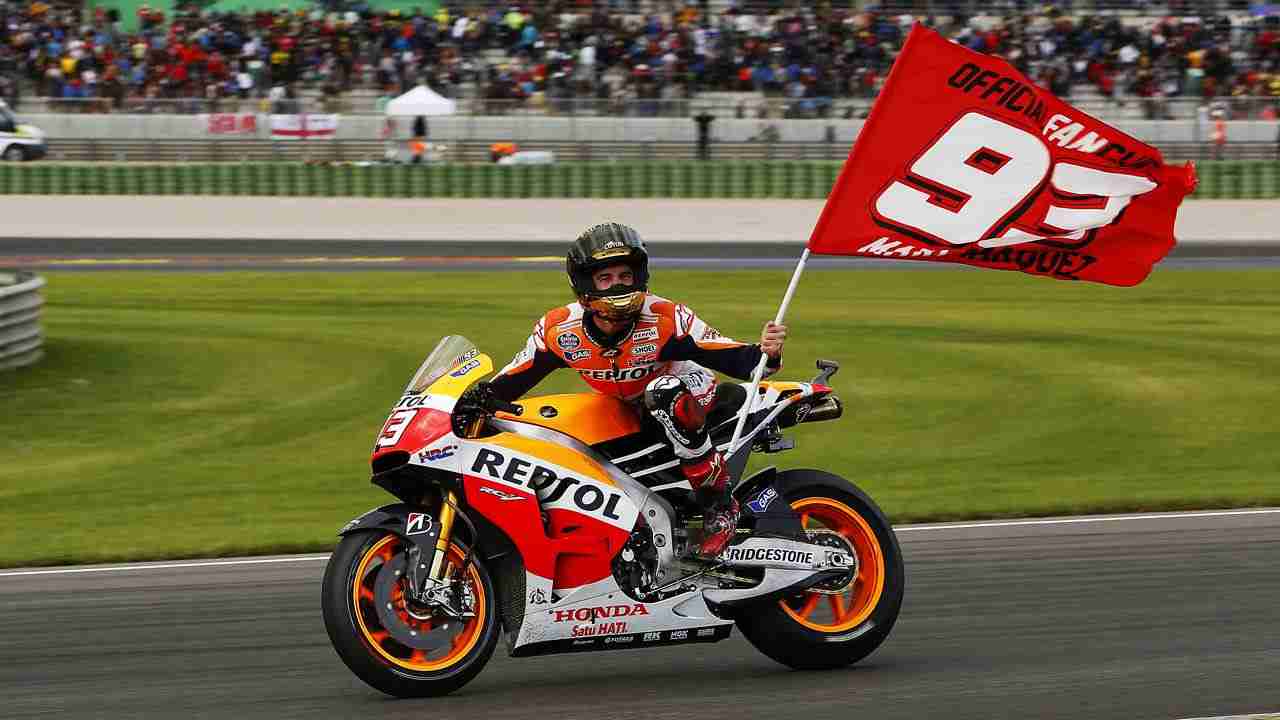 Repsol Honda’s Marc Marquez underlined his dominance in 2014 as the MotoGP World Champion became the first rider to claim thirteen premier class victories in a season by taking a masterful win at Valencia. The season finale commenced in dry conditions, yet light rain began to fall as the first lap was completed creating challenging conditions for the riders. Marquez found himself in third position for the opening nine laps of the race in an entertaining battle with Movistar Yamaha MotoGP’s Valentino Rossi and Pramac Racing’s Andrea Iannone who had a sensational start to the race. Intermittent rain fell throughout the race, while Marquez seized the race lead from Iannone on lap eleven, after which he was never headed. Marquez streaked away to win the race by 3.516 seconds from Rossi, while on the other Repsol Honda RC213V Dani Pedrosa took third position a further ten seconds behind. Despite the variable conditions during the race, Marc Marquez was able to set a new Valencia Circuit Best Lap record of 1’31.515 on the eighth lap. The cloud cover and lower ambient temperatures resulted in the track temperature reaching a maximum of 21°C for the race, 7°C degrees cooler than yesterday’s peak recording. As was the case throughout the previous sessions, all the Factory Ducati, Honda and Yamaha riders selected the medium compound rear slick for the race with ultimately fifteen of the twenty-five starters selecting this option. The remaining ten riders opted for the soft compound rear slick. The asymmetric soft compound front slick was the most popular front tyre choice for the race, with fourteen riders selecting it, while ten riders selected the symmetric soft compound front slick. Only one rider, Cardion AB Motoracing’s Karel Abraham opted for the extra-soft symmetric front slick for the race.

Rossi’s second place at Valencia was enough for him to secure second position in the riders’ championship standings with 295 points, thirty-two points ahead of his teammate Jorge Lorenzo who retired from today’s Valencia Grand Prix for only his second DNF of the year. Marquez’s victory sees him end the season on 362 points.

“I am so pleased, especially for my brother! It is a very happy day, even more than in Motegi when I was crowned Champion. Today Alex took the Moto3 title that he deserved, and to cap it off I was able to close the year with a victory here in Valencia. I congratulate my brother for his season, because both him and Honda have done a great job this year! Now it’s time to celebrate in the way that the occasion deserves, because it will be difficult to repeat another season like this. During today’s race I was reminded of Aragon, because it was raining and there was a moment in which I considered whether or not to change the bike. In the end we stayed calm and today we were successful with our strategy. It was an ordeal which I enjoyed but suffered a bit at times! Thanks to the whole team for all their efforts this season!”

“I’m happy, because I finished this very positive season for me and my team with a great race and a good result here in Valencia. For me it’s a great achievement to take the pole position and to finish in second place, especially because this race was very difficult and the conditions were very dangerous. I tried to stay concentrated and not to make a mistake. It’s a bit of a shame that I started to suffer a little bit on the right side of the tyre, because I wasn’t so far from Marc, but it still has been a good season. We got second in the championship, a lot of podiums and two victories. Now, we have to work to be even better next year. My bad luck is called Marc Marquez, because without him I can win the championship and a lot of races. He did a fantastic job and won a lot of races. It’s a great pleasure to fight with him, but we are not so far and we never give up and try to come closer. Especially on Tuesday, but alsotomorrow we will start working for next season. I am very close to 300 points, but Marquez won a lot more races than me, so me and my team need to improve the Yamaha to try and stay closer during the whole season. The test is important because we have a lot of new stuff to test for next year, so it will be interesting.”

“It has not been my best season and obviously I’m not satisfied, but you have to take the positives from the situation because we learned a lot this year. Over the next few days we have some testing and we will try to get the best out of the bike for the next test, which comes in February. Today’s race was difficult. It rained a lot in some areas of the track and it was very hard to keep upright because other parts of the track it was dry. We had to take risks and also be careful at the same time. On the other hand, we finished on the podium and that’s good because we hadn’t taken points at the previous two races.”