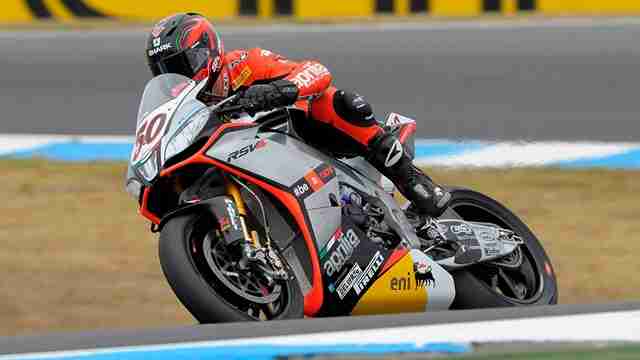 On the Phillip Island, World Superbike debut for 2014, Aprilia have started strong with their riders doing well in both races. Reigning SBK champion Tom Sykes experienced some grip issues in race one and finished seventh, but changes to his set-up arrived at by his team allowed him to fight back through the field in race two and he took a strong third place. He could have challenged for the win had the race not been cut short by the red flag, but he was still only 1.103 seconds from the winner. In the new Evo category David Salom (Kawasaki Racing Team SBK Evo) made a clean sweep of the two top places on offer on his Ninja ZX-10R, finishing ninth in race one overall and then tenth in race two. He is ranked ninth in the oval championship standings after two races, and clearly leads the Evo class. Baz is a brilliant second in the overall SBK points, on 31, while Sykes’ recovery from seventh in race one puts him sixth overall, but very close to the top positions after one round. Fabien Foret (Kawasaki Mahi Racing Team India SBK Evo) scored two 12th places today. Jeremy Guarnoni (MRS Kawasaki SBK Evo) was also in the points, for 14th in race one. Sheridan Morais (Iron Brain Kawasaki SBK Evo) scored 15th and then 14th places.

Eugene Laverty stormed to victory on his Voltcom Crescent Suzuki debut in race one at Phillip Island in Australia this afternoon, securing the first World Championship win for the Japanese manufacturer since 2010.

Fighting back from a difficult start, a determined Laverty made his way through from seventh to hunt down the leading pack of Giugliano, Melandri and Guintoli by lap seven. Biding his time, the Irishman advanced on the leaders, making his break for the lead on lap 17 and not looking back. The Yoshimura-powered GSX-R firmly controlled the pace for the remaining five laps bringing the first victory for Crescent Suzuki on the world stage. Race two continued to find Laverty challenging for the lead, a brief battle in the opening laps resulted in the Suzuki GSX-R again dominating the mid-race before a mechanical issue — causing a visible engine failure – bought about an early end to the weekend’s activities.

“A day of highs and lows! The first race was incredible! To be so far back on the first lap and come through to win, it was the perfect race for us and a nice way to pay back the whole team for the belief they’ve shown in me. Paul Denning worked hard to get me on board and he delivered everything I needed. He brought in my Crew Chief Phil Marron, Davide Gentile to work on the electronics, and Stan, who I’ve worked with before. All the rest of the boys have welcomed me, so it was nice to be able to reward them with the win right away, and it’s a win that means more to me than any so far in my WSBK career. The second race was a disappointment for everyone. We didn’t deserve that, that’s for sure but that’s racing and unfortunately that’s how it goes sometimes.”

“In Race 1 I trusted perhaps a little too much on my tyres, had a strong start and towards the end I had no more right feeling with the rear tire. The conditions were very different from those found in recent days, however, we did a good job. In the second race I tried to stay covered and it worked, if I think about what happened during the winter and I can not be happy with our weekend, I’m finally back on the highest step of the podium. I want to thank the guys who have followed me during rehab, now I’m pretty tired but I will have one month in which to recover before the next race. “

“Race 1 went well, I got a good start and then was quiet in the early laps to preserve the tires ahead of the final. Unfortunately, after a mid-race the bike was sliding so much, I could not be incisive, and then when I went to the head Eugene preferred to keep second place. Even in Race 2 I wanted to implement the same tactics, but to surpass Rea I braked stronger than usual, and the rear wheel is lifted and I was forced to straighten. I’m disappointed because I threw out the important points, however I still lack experience in adapting to the reactions of the bike and adjust the setting to my driving characteristics. Even the track conditions have highlighted the problems that we had never had. Now I have to frame the situation in order to be ready for the next race. “

“We changed just a little thing on the bike for race two and then opted for a new front tyre. So to score second place and then leave here second in the world championship is really good. In race one I was really happy with a top five and it felt like a podium. When I crashed again on Friday I really did not think I could make it this week but it worked out well on race day. I wanted to go really fast in the beginning of race two and I saw that my pace was really good. I was even faster than Sylvain in the lead, but I always rode with the idea to save the tyres. My bike was feeling great. Tom was coming back and I am sure the end of the race would have been a great fight if it had gone full distance.”

“We had some issues in race one but in the second race we changed the set-up. I really do have to say a big thanks to the team. I have a real good set of guys working for me and their knowledge is incredible. We went back to some basics and it was so nice. Although Sylvain rode well to win the race I felt race two would have been our race, but unfortunately it was cut short. That is how racing goes sometimes. I am very happy with how things have gone finally. For track temperatures to be so hot on race day here in Phillip Island, and a little bit of wind blowing around, these are usually the worst conditions for us. So it was great to come back so strong at the end. We reeled in the Aprilia and that never usually happens here, so I felt the next second laps of the second race would have been my part of the race. Now I can head back to Europe knowing that we have been so competitive at our worst circuit. We’re off to a steady start but I am only six points off second in the championship and 16 points off the lead.”