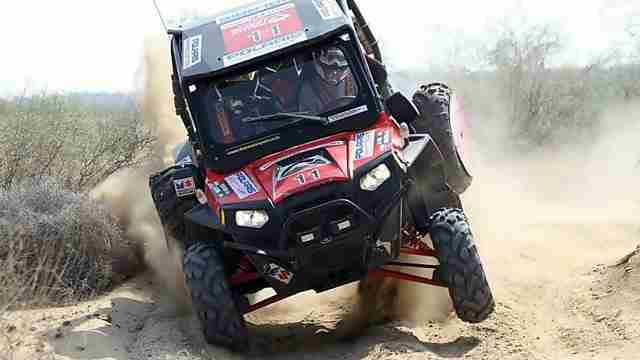 Polaris India has once again proved its supremacy in endurance and tackling treacherous terrains, by bagging the First place in the 12th Desert Storm 2014. Polaris India participated in one of the most challenging desert rallies, the Desert Storm 2014 for the third consecutive year. The motorsport extravaganza commenced from 24th February, 2014 with the finale on 1st March, 2014. Polaris India competed in the Xtreme 4 wheelers category with the RZR XP 900 model and secured 1st Position while Polaris Sportsman 850 driven by Ankush Gulati came 1st in the Quad Category and 6th in the Moto/Quad Category.

A total of 55 rallyists participated in this category. The company’s award-winning ace rider Raj Singh Rathore, who had last year topped the Xtreme Quad, was the Polaris rider this year as well, along with navigator Vishnu Singh. The Polaris Sportsman 850 was driven by Ankush Gulati who participated in the rally for the first time. Polaris ATV/ORVs are specifically designed to take on off-road terrain. They are the only sport utility off-roaders which are exclusively built for off-road activities. Polaris off-roaders deliver a razor sharp performance every time. They have the engine and handling necessary to go fast, but with extra suspension travel and ground clearance.

“Year after year Polaris has proved its dominance when its toughness and endurance quotient is tested in rallies like the Desert Storm. This year too we have proved why Polaris is among the global leader of ORV all over the world. The RZR XP 900 has lived up to Polaris’ long-standing reputation of endurance, toughness and performance. Sportsman 850 has also proved why it is ‘the’ vehicle for a terrain like this. A big thanks to the spectators at the rally who were so encouraging and cheered along our riders Raj Singh Rathore and Ankush Gulati. The rally was all about survival under excessive conditions but our riders performed impeccably under such extreme circumstances and also proved that if you want to win such competition, own a Polaris.”

The rally was flagged off from the Sardarshahar, a town in the Churu district of Rajasthan in the late night hours of 24 February, 2014. The rallyists then travelled the rough outback of 2,500 kms through Sardarshahar, Bikaner and Jaisalmer to finally finish their journey at Jaipur. This year the competitors also had to endure 3 nights of driving making the challenge even more difficult. Apart from 55 rallyist in the Xtreme 4×4 category, the 2014 edition had 35 individuals in Rally Moto (Motorcycles). The winners in both the categories are based solely on fast timings.