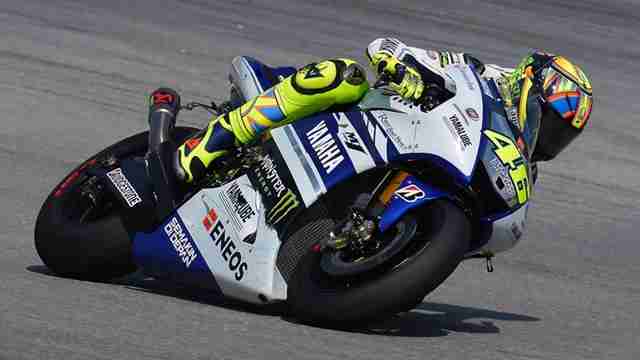 After a long winter wait the MotoGP riders were finally back on track today for the first official ride of the 2014 season at the Sepang International circuit in Malaysia. Rossi, the first Factory rider to venture out on track, was also the first to find a quicker pace on his M1, slotting quickly into the top three and leading briefly before the lunch break. As the afternoon session continued the Italian was joined by his teammate Lorenzo who moved up into second, just 0.3 off front man Marc Marquez. A flurry of fast laps towards the end of the session re-shuffled the pack a little, Rossi ending the day in second, 0.518 from the top and Lorenzo in fourth, 0.796 seconds from first. Repsol Honda riders Marc Marquez and Dani Pedrosa both spent time on the 2013 RC213V machine, to regain the feeling after the Winter break, before climbing aboard their 2014 bikes. It wasn’t long before the two Spanish riders were topping the time sheets with Marc setting the fastest time before lunch with a time of 2:00.767 set on lap 30 of 34. Dani was just 0.747 off him with 2:01.514 on lap 25 of 31, placing him 7th.

The Suzuki MotoGP Test Team completed the opening day of the official MotoGP Tests at Sepang in Malaysia today satisfied with the progress made with its new Magneti Marelli electronic ignition. Test riders Randy De Puniet and Nobuatsu Aoki switched to the new MotoGP system after a few initial runs on the 5,543km circuit with its former ignition system then spent the entire day evaluating and making further adjustments for optimum performance. De Puniet completed 75 laps during the session as the team worked tirelessly to find the best settings, recording his fastest time of 2:03.893ms on his 47th lap. The team has two further days of testing in which it hopes to further develop the new ignition system.

“I’m happy with how this first day went and to have achieved my goal of regaining my feeling on the bike. Of course, at the start I was a little stiff, but gradually I was able to pick up the pace. Today I tested the new rear tyre from Bridgestone and it felt similar to last year. Tomorrow we will continue with our plan: testing out the setup and beginning to draw conclusions from our findings. We put in a lot of laps today and I’m sure that tomorrow I will feel it; even though we train in the gym over the winter, here you work your muscles in a different way.”

“I’m happy about the first day, it’s a good start. I feel good and I’m in a good shape. I’m happy because we’ve been very fast and always stayed in the top three positions. We worked a lot on the bike and on the new stuff to try and improve my problems. We already found something. I’m happy because I feel good with the bike and was able to go into the 2’00 minute mark, that was my target. It’s a positive day.”

“It was a very long, hard day. We put in a lot of laps and despite us being fresh as it’s the first day, I’m sure that tomorrow I’ll be feeling it! It was fun, as I had not been on the bike for a long time and was curious to see how I would feel after my operation last year. In general things went well and we focused on trying out the rear brakes, clutch and engine mapping today. Tomorrow we will work on the chassis and the new tyres. The bike seems very similar to last year’s model; we still need more time to work on things, but it appears as if there are no huge differences required in terms of riding style.”

“As always it’s difficult to come back again in a good shape after the Winter, some months without training changes you a lot so the first day is always tough! The bike has changed quite a bit compared to last year. The new regulation of 20 liters fuel allowance makes us change quite a lot of electronics so the bike is not working exactly how I would like. I know we will find a solution in the next two days.”