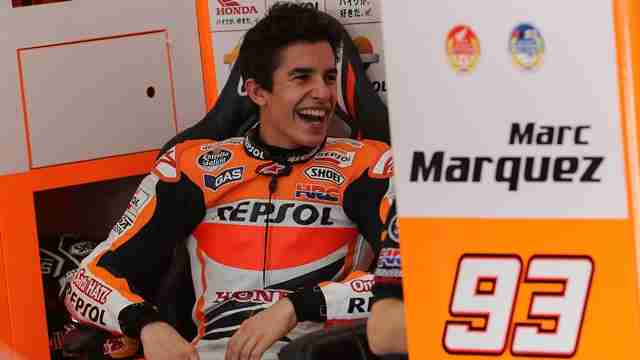 Marc Marquez began his preseason in the best possible fashion, preparing for his second season in MotoGP and his title defence. The Repsol Honda rider dominated all three days of the Sepang test, breaking the circuit record on the final day. His time of 1:59.533 bested Casey Stoner’s previous record, set in 2012.

“This has been a winter of two parts. The first was dedicated to events and press, and the second part to a bit more fun and things like Dirt Track racing, driving cars or karting. It is always good to keep active.”

“There was time for everything. I also had some holiday time over Christmas. In January I began training and had some fun —as I hadn’t really had the chance before then.”

“Very good. I had tried it once before, a long time ago, but this was the first time that I’d really trained Trials. We had a lot of fun and plenty of laughs, which is important. Now that I have had that experience, I have a taste for it and a Trials bike in my garage to practice occasionally.”

“Once -because I haven’t had more time. To have fun, my brother and I will do it again from time to time.

“I’m doing pretty good. It’s normal that my hand is like this after a first test, but the truth is that I felt rather good. Every day I felt better. The first day I was a little weak, because I was recovering from the flu and was a little tired. I wasn’t in my best shape, but the test saw me feel better with every day. We also did a race simulation which went well. I just have to keep preparing and improving, but in the end the best training comes on the bike.”

“We saw that we can improve our cornering and exiting, and also trying out the new Bridgestone tyre was very positive; they worked very well and I like them. They are similar to the previous ones, but the new ones have good grip and are very consistent from start to finish.”

“Yes, at the moment we haven’t had any problems with fuel consumption. Maybe we will have at some circuits, but right now we are ok in this regard. This change also means that we have to balance the bike, because it isn’t exactly like before and there are some small differences.”

“I have more experience and you can tell this a lot —both on and off the track. I remember that last year I was on the limit on every lap, and this year it is different. I am finding the best way forward more quickly when it comes to trying things out. That is important for Honda.

“This year the first thing to do is focus on preseason. When the season starts, of course we are going to fight for the title again and try to be competitive from the start.”

“It depends. At the moment we have checked that our base setup is good, with the information that we had from the 2013 bike. But yes, sometimes it is good to make big changes to see if they work better or worse, because with smaller changes you always have a little doubt.”

“Yes, I made some practice starts and I have improved a little, but one thing is to do it here with no noise, and another is doing it in a race.”

“Pretty good. Depending on how someone does in Moto2, you can set out your expectations for them. I expected Pol to be fast and he did well on his first time here in Malaysia with the MotoGP bike. Redding looks big onboard the Honda. MotoGP is all about how you finish, not how you start, and I’m sure that during preseason and the season they will both progress. Pol, with a MotoGP factory bike, will be up at the front this year.”

“It is different. For example, last year at this test I was more nervous and had more doubts. Now I feel more relaxed, but this is only the first test, in February. When we go racing it will be different, because there will be that pressure, although I work well under those conditions. If I place fourth, fifth, sixth… people will say that it’s a disaster, and likewise if I finish second, they will say that I could have done better. Last year I had the advantage of every result being good.”