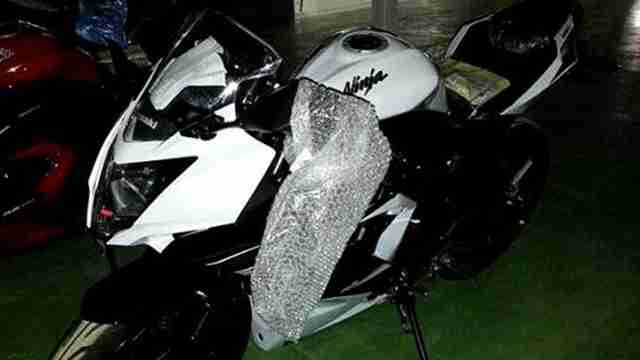 What we have here is a photograph of a redesigned new Ninja 250 from our friends at TMCblog. There is a lot of chatter that this could be the a 150 – 200 cc mass market Ninja, but we strongly suspect that this will be no lesser than a 250cc motorcycle. The biggest confusion though is the speculation surrounding its engine configuration. Will it be a cost effective single cylinder or the same existing 250cc engine with a fresh look to make the 250 stand apart from the 300?

It makes sense to take on the competition with a single, all its competitors are in the same configuration and at least in India are priced significantly lower than what the older Ninja 250 and the current Ninja 300. What is surprising is that there has never been a talk of a single from Kawasaki, the only hint of a 250 coming that we got earlier was at the ZX-10R and the ZX14-R India launch when Mr. Horiuchi and Mr. Nishikawa mentioned that they are planning to re-launch the Ninja 250 in India. Is this that machine? Now if its a 150 -200 cc machine it probably will not come to India as its price point is going to be way too expensive compared to its competitors even if Kawasaki begins a CKD operation for the bike. The only other logical explanation is that this is a redesigned Ninja 250 to make it visually different from the highly potent Ninja 300. And in that format be it a single or a twin it will in all probability make it to India. We sincerely hope its a single with a competitive price, but logic says its the 250 twin in a new avatar.