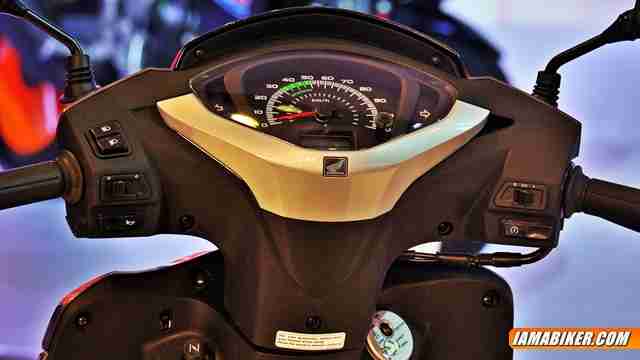 We were the first to brake the news yesterday, and now it’s official, the Honda Activa 125 has been unveiled at the Auto Expo 2014. This new Activa will be powered by a 124.9 cc engine that produces 8.6 BHP @ 6500 RPM and 10.12 Nm of torque @ 5500 RPM. The more powerful engine should ideally see a drop in mileage, but Honda claim that due to its HET technology it will give as much as 55 kmpl. The Honda Activa 125 will feature a 190 mm front disc brake as an option but will have drum brakes as standard. Telescopic front forks will also make its presence felt for the first time in the Activa range of scooters. It will also feature the Combi braking system that has become pretty much standard on all Honda scooters. The scooter will also have a digital meter performing the job of the odometer and the fuel meter and the classic analog needle for the speedometer. It comes with 5 spoke alloys for the disc option and overall design is mix of the recently launched Activa I and the existing Honda Activa. There is a slight increase in the wheel base and the ground clearance for the Activa 125 over the existing Activa, while the seat height remains the same. The scooter will have both the self and kick start option. The new Activa 125 will be available across showrooms from April and there has been no word on the pricing yet, but we expect it to be around the 52 thousand mark. Colour options to include the existing white, red, grey and beige metallic ones. The company also took this opportunity to introduce new colour options for the Dream Yuga and the CB Trigger.