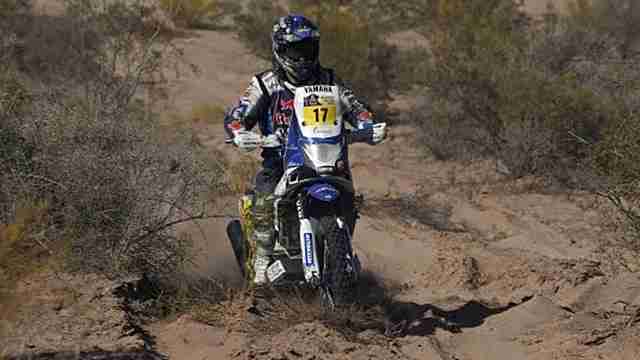 Stage five of the 2014 Dakar brought more twists and challenges with it today for the Yamaha Factory Racing riders. What had originally been scheduled to be one of the longest stages of the rally was reduced in length at short notice so the bikes only completed the first 211 km of special stage before riding the link stage to the bivouac. Despite the reduction in length there was still plenty of time for challenges to arise and be conquered.

Michael Metge had the best result of the three official Yamaha riders, working past several riders to finish 11th on the stage and move into 17th overall. Cyril Despres was next, coming home eventually in 18th after a difficult stage. Fuel problems forced him to end his search for the elusive WP17 prematurely. He received an extra hour’s penalty for the missing way point, dropping him to 34th for the day and 13th overall. Olivier Pain was the last of the three to complete the stage, finishing in 23rd to hold 7th in the standings after no less than three crashes in the soft sand dunes. Due to the number of riders who were also penalized the overall standings are liable to change.

“After yesterday’s stage I started late this morning and suffered in the dust right at the beginning of the special. After that we got to the first set of dunes and I was pleased to find that, after the changes we’d made to my suspension, my bike handled much better than in the sand on the second stage. All of which meant I was able to attack the second lot of dunes in the camel grass with much more confidence and got past a fair few riders, to finish 11th on the stage. All in all, not a bad day.”

“It was very hot in the special and the sand was soft. Because of that I was paying particular attention to engine temperature and even more so when I noticed I was consuming fuel at an alarming rate. I was on my way to get the famous WP17 but had to turn back when I realized I wouldn’t have enough fuel to make it to the end. I was right on the limit of running out when I came across a quad rider who kindly gave me a liter and a half. In all, my various problems cost me 44 minutes, to which will be added the one hour penalty…”

“Another difficult day with the heat and soft sand making it hard work, both for man and machine. I had two crashes early on, but they were in the dunes, so nothing serious. Then I had a third one in a rio that was a bit more serious. I hit my thigh with the handlebar, but fortunately the bike was undamaged. Like pretty much everyone else, I did a few extra kilometers with the tricky navigation and ran out of fuel right on the finish line. Luckily Alain Duclos gave me a tow to the fuel station on the liaison.”

CS Santosh gets a heroes welcome