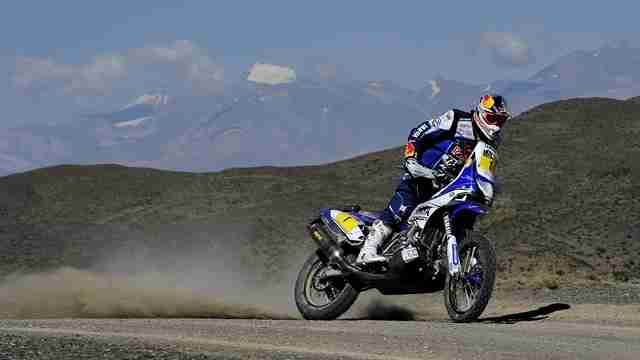 Following from yesterday’s maiden stage win on a Yamaha, Cyril Despres was the first rider to open the piste today for the ninth stage of the 2014 Dakar Rally. The defending champion was again on the pace with his Yamaha YZ450F machine, staying within five minutes of the lead to finish the day in third position. The top three result moves Despres up another place in the overall standings to eighth overall. He is now less than 23 minutes from the fourth placed rider Israel and just over 51 minutes off the podium. Fellow Frenchman Olivier Pain had a less successful day, losing approximately 10 minutes with an electrical issue to finish 11th. Despite the time loss the result was still good enough to gain one place overall and move up to fifth in the standings. Michael Metge also lost time with navigation and crossed the line in 18th place to maintain his 14th position overall.

“I’m very relieved to have made it all the way to the end. At the refueling at kilometer 201 I noticed I had a fuel leak from the one of the rear tanks, and that petrol was dripping on to the exhaust pipe! I tried to drain as much of the fuel out of there into the other tanks as possible and then set off hoping for the best. As I crossed the line the bike started to cut out from lack of petrol! I also had a pretty big crash in the fesh fesh around kilometer 250. It’s a pity, because up until the refueling I was concentrating hard on the navigation and making good progress. Overall I made up some more ground today on those just in front of me and as before will keep attacking to see what can be achieved before the final finish line.”

“Early on I noticed the bike cutting out when I hit something hard and so deduced I had loose electrical connection somewhere. We have a back-up solution where we can bypass everything except what is essential to make the engine run and it was while I was looking to switch to that system that I noticed that one of the wires to the CDI was not connected properly. Unfortunately while I was sorting that out a couple of riders past me and I was then stuck in their dust for about 180 kilometers until the refueling. By that time I was riding at a false rhythm and that and getting stuck a couple of times in the dunes cost me more time.”

“I reckon a lot of riders behind the top 3 are mainly following the tracks in front of them and for sure you ‘waste’ less time that way. However one of the advantages of being a support rider is that you don’t have so much pressure regarding your individual result. So instead of following everybody else I try and do my own navigation. Today it caused me to get lost twice but it is the only way to learn and I am sure the experience I have the luxury of gaining now will pay off in the future.”