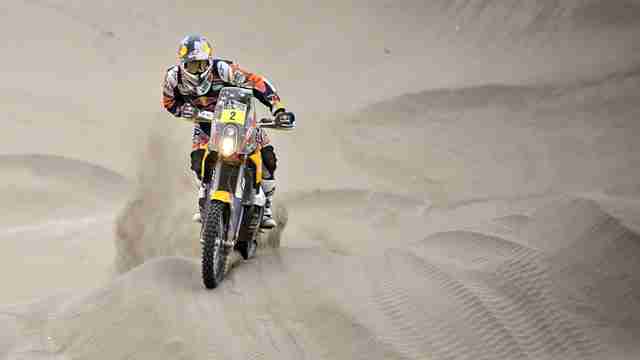 Red Bull KTM’s Marc Coma finished in fifth in Stage 10 of the 2014 Dakar Rally, preserving his overall lead in this annual motorsports epic. The KTM factory rider now has a 44-minute 10 lead over second placed Joan Barreda. Red Bull KTM’s Jordi Viladoms was eleventh in the stage and is still at overall third with a 14-minute advantage over Frenchman Olivier Pain.

Coma said it had not been an easy day and despite the margin of his lead, he is still cautious. When asked if he was already thinking about a possible victory he said: “No, if we start to think like that we’re in the wrong direction. We have to stay focused all the time. We have two very tough days, especially tomorrow. It is 600 km and the longest special of the rally and everything is possible.”

Coma started the day with a 55 minute 36 second lead over second placed Barreda after his rival picked up a 15-minute penalty overnight. Coma’s teammate Jordi Viladoms went into the stage at third with his closest challenge coming from Jeremias Esquerre of Chile. But today was the end of the Dakar for Esquerre who crashed out and had to withdraw.

Viladoms said at the end of the stage that it had been a tough day and navigation had been an issue. “I got lost twice and I lost some time so now we must push one hundred present if we want to keep this position. Fourteen minutes is nothing at the Dakar so we must work really hard for these three days. The most important thing is that I don’t make mistakes and then I can keep this position.”

It was a good day for KTM-supported rider Kuba Przygonski of Poland who finished in sixth for his best performance so far in this rally and is seventh overall. KTM Team Manager Alex Doringer said earlier in the week that Kuba was learning a lot from being in close contact with Coma this year and it was showing in the quality of his riding.

Przygonski after Stage 10: “The battle is from the beginning to the end and we have three more days to go. We have 600 km tomorrow and it will be a really tough stage. We’ll see what happens.”

Riders faced Wednesday’s special in two stages in sands of the Atacama Desert. The first took them on a descent down to the shores of the shores of the Pacific for the first 200 km but then the second part had its share of the fine and unpredictable dust called fesh-fesh at they headed along twisting and turning mining tracks on their way to the bivouac in Antofagasta.

KTM-supported rider Riaan van Niekerk of South Africa, riding in his second Dakar, is on a steep learning curve. He said navigation was key in the first part of the stage when riders were in the dunes. “There was quite a lot of fesh-fesh and its not nice at all. You’re in the dust and getting tired. As soon as you try to push you make a mistake. That’s what makes the Dakar. Its not the beginning, its trying to get to the finish.”

A fresh challenge awaits the riders on Thursday in Stage 11 from Antofagasta to El Salvador where they will be on their bikes for 749 km, 605 km of which is the timed special, the longest of this year’s rally. It will be a key stage and even the fastest of the motorcyclists can expect to be riding for around seven hours.