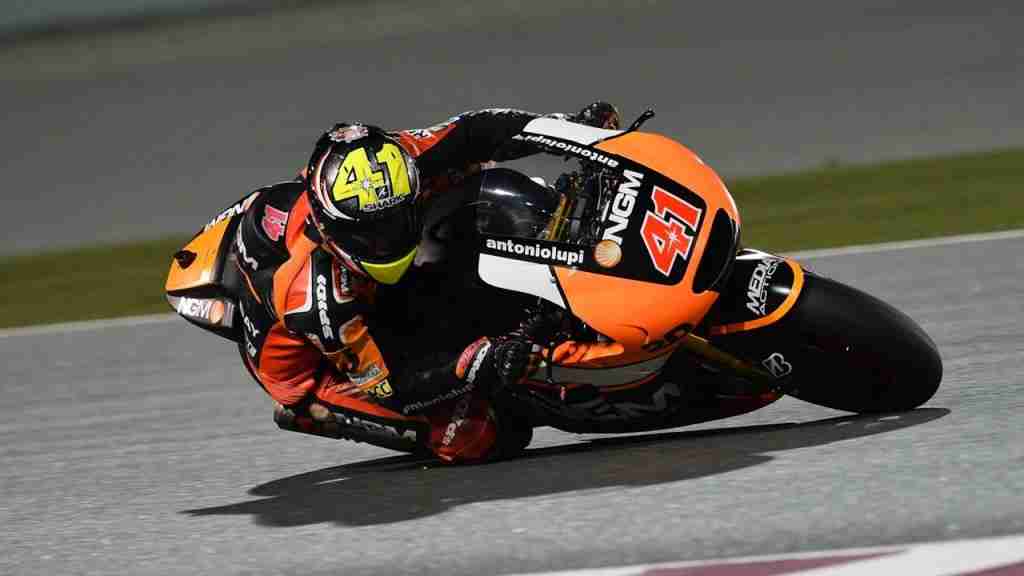 The 2014 MotoGP World Championship officially got underway with the first free practice sessions today, under the floodlights of the Losail Circuit in Qatar. With little rubber down on the circuit and some sand blowing across from the desert, grip issues became the number one problem to solve for all riders. The red flag was deployed mid-way through the session which delayed the free practice briefly; otherwise the track conditions were dry although lacking traction due to a dirty surface. Check out the rider quotes and FP1 timings below.

“It’s a great start and it’s a good feeling to be on top of the time sheets. We know that we had some advantage compared to the factory riders, because we were testing here two weeks ago and we started the practice session already with a good set up. Anyway I’m happy because I was fast with both soft and hard tyre. I’m sure that tomorrow everybody will improve, but we also have room for improvement so I’m really excited to this start of the season. The most important thing is to keep on working and being focused, it’s just the first free practice and my target is to fight for the podium on Sunday.”

“The track is in quite a bad condition but I think it’s quite normal for a first practice. There is a lot of sand and not a lot of rubber down. Also a lot of riders except the factory riders have been here for three days and have done a lot more km and a lot more laps so it’s normal they are stronger than us. Now the work for the weekend will be hard to reduce the gap. I have a lack of grip front and rear, on corner entry and also on acceleration the bike moves very much. I think the condition of the track is getting better and it will get easier.”

“I’m a little disappointed because hearing the comments of the riders that were here two weeks ago it seemed the tyres were working really well. Having arrived here it seems the track is a little worse, the feeling of the rear tyre is more or less the same as in Sepang, with little grip and traction. We didn’t have three days to test here like the top five so our problems are bigger. We must hope that the tyre gets better and we can improve the grip on the rear.”

“I am fairly happy with how the first session went, because I haven’t been on the bike in a while. I didn’t think my foot would bother me so much, especially on the right hand corners, although at the end of the session I felt better and this gives me hope of improving tomorrow. We are going to try to follow the same working strategy as today. In terms of the times, we aren’t too far off Jorge, Valentino and Dani -and it’s normal that the riders who were here for the test a fortnight ago are fast right from the get-go.”

“We had a few problems today with grip, which is something that some of the riders who rode here at the test two weeks ago had commented about before. There isn’t much grip on the track and that means we have to try to get the most out of the bike under these circumstances. We’ll see if the track improves with a little more rubber laid down, giving us more traction. Today we just didn’t really have any, even though the track was in good condition. We still hope to improve session-by-session.”

“Today was a really good start for us. The track conditions were different to when we tested here, probably due to a sandstorm which happened recently. However, the grip improved during the session and I was able to do 1:55 lap times again. As I could keep this rhythm quite easily I decided that it wasn’t worth pushing to the absolute limit, as it was still a bit too risky with the conditions, so I will wait until tomorrow as the grip will improve for sure. Of course, I am happy with 3rd and we are close to Bautista who is on the same tyres. Anyway I’m confident that we will get closer to the top as the track gets better, but the 3 days of testing has definitely helped us. Our aim is to stay in front of the factory bikes, for as long as possible”.

“I am happy with the performance I made today. My shoulder was still hurting a little but I can ride which I am pleased about. It was a bit painful on the straight when the bike is moving, and also in the long left corner when I had to lean down the outside of the fairing. The track conditions were also a bit different to the test we did here; it’s colder and there is less grip. I didn’t want to ride at 100% because of this as I think tomorrow will be better for traction after the track has been cleaned a bit more. The factory bikes will catch up, but I’m sure we can improve as well and I am just really pleased that the season finally started. At the end a top 5 result during my first ever MotoGP session is not bad at all”.

“It’s been a very positive session for us. The bike worked very well, even though the track was more slippery than the test I immediately had a good feeling. I’m glad to be the first Ducati , and to give my contribution to improve the bike. The Ducati is now more competitive compared to other bikes, so now we can also have fun and we can think about doing something better.”

“At the start of the session I was struggling to get comfortable with the engine braking in corner entry but after a few laps and especially after the red flag we managed to slightly improve the situation. We have more or less got the same setting and feeling that we established by the end of the last test, with some changes to the gearbox setting that have helped us in the straights. That has helped us to close the gap to the guys at the top, the bike is working better in the higher gears and pulling harder down the straights. We also made a chassis set-up change that is helping me get the bike stopped. To be honest it feels better than expected, which is a nice way to start the first Grand Prix of the season. The test we had here was obviously very useful, we are making progress every day and the relationship with the team continues to get smoother and stronger.”

“It was good to get the first free practice session of the season under our belts. We started the session with a lot of motivation but unfortunately after just a few laps we had an electronic problems and had to change bikes. We had more problems though and had to come in three times for the electronics. It is a bit of a mystery because we didn’t have anything like this in the test so now we need to work out what the source of this problem is. I am sure my crew will be able to fix it and we will have a good feeling tomorrow. Anyway, if you are going to have problems like this it is better that they happen on the first day!”

“We tried the soft tyre at the beginning of the session and then we switched to the hard tyre. All in all it was a good session and I did my best lap with the hard tyre. I’m adapting my riding style to the bike instead of trying to change the bike set up. I need to ride the bike on the rear and of course it’s not natural after 22 years but this is a new challenge that I take with great enthusiasm. I’m also very happy with Aleix’s result, he is doing great and I’m really excited for him.”

“I was very scared , it was a nasty crash. On the straight before the last corner while I was at full-gas the bike wheeled slightly and when the front tire landed again is slipped away without me noticing it. I do not know how it happened! I feel lucky because I didn’t fracture or brake anything but I have a lot of pain in my the left hand and the right shoulder. “