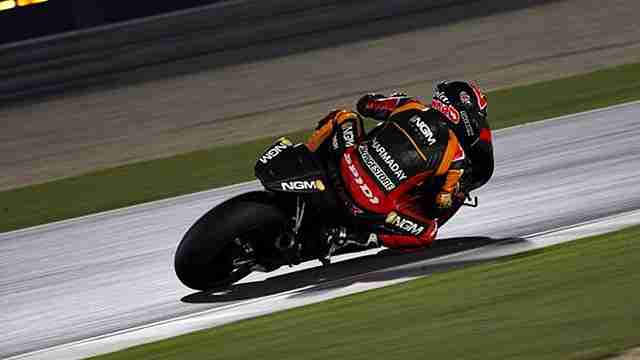 Aleix Espargaro was the quickest rider at the final MotoGP pre-season test of 2014, the Spaniard setting a time of 1’54.874 aboard his open-class machine NGM Mobile Forward Racing Yamaha on the final day of action at Qatar’s Losail International Circuit. Aleix narrowly beat his brother to the top of the timesheets in Qatar, after Monster Tech 3 Yamaha’s Pol Espargaro ended the test just 0.033 seconds off the pace and second overall. Bradley Smith ensured it was a successful test for the Monster Yamaha Tech 3 team, the Briton third quickest with a personal best time of 1’55.027. Seventeen riders took part in the Qatar pre-season test, with the Ducati, Repsol Honda and Yamaha Factory Racing teams not taking part after participating in the Phillip Island tyre test earlier in the week.

Conditions for the test were typical for Losail, with warm and dry days giving way to cool and at times, humid conditions at night. In order to maximise the amount of setup time for the teams, the track was open each day from 1600-2300 to coincide with the session times for the season opener at the same venue in a fortnight’s time. Track temperatures varied from 24-43°C during the three-day test with higher humidity levels late in the evening causing variable grip levels. Given the desert setting of the circuit, track conditions were dusty although this did improve towards the end of the three days. With pre-season testing now over for another year, Bridgestone will be back at the Losail International Circuit for the opening round of the 2014 MotoGP season from March 20.