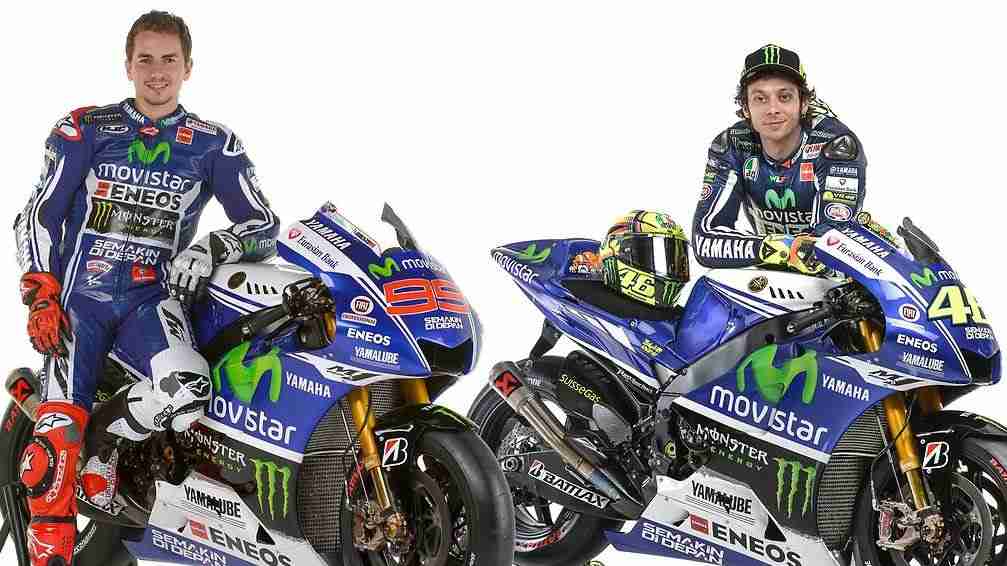 Movistar Yamaha MotoGP kick started the Qatar MotoGP weekend this afternoon by taking the covers off the 2014 YZR-M1 in front of the world’s key motorcycle media. Riders Jorge Lorenzo and Valentino Rossi were joined on the Losail circuit start grid by Kouichi Tsuji, General Manager of Yamaha Motor Co.’s Motorsports Division, Yamaha Motor Racing’s Managing Director Lin Jarvis and TelefÃ³nica Spain’s Director of Media, Luis Velo to reveal the new livery. The first two months of the year have seen a flurry of activity for the team, highlighted by the recent ground breaking five-year title sponsorship agreement that launches the team Yamaha Movistar MotoGP ahead of the 2014 season.

The new year has also seen the announcement of other new sponsors to the Team including EURASIAN BANK and FIAT PROFESSIONAL along with renewals and continued partnerships with ENEOS, SEMAKIN DI DEPAN (Yamaha Motor Indonesia), MONSTER ENERGY, SUISSEGAS, YAMALUBE AND TW STEEL. Pre-season testing on track has been very positive. With the exception of a rear grip issues at Sepang, both Lorenzo, Rossi and the 2014 YZR-M1 have shown great promise and speed in the shakedown ahead of this season’s title challenge. Now the wait is over and the riders will take to the track under the floodlights of the Losail circuit in Qatar in just 24hrs to begin practice for round one of the 2014 MotoGP World Championship, the Commercial Bank Grand Prix of Qatar. The track has proved to be a great season starter for Lorenzo, the double premier class world champion having taken consecutive victories in the last two races. Lorenzo has always started from the front row and never finished off the podium in Qatar. Nine-time world champion Rossi has an equally impressive record at the Losail circuit, claiming three wins and taking second last year after a fantastic battle with then rookie Marc Marquez in his first MotoGP race.

Built in the desert on the outskirts of Qatar’s capital city Doha, the Losail International Circuit has hosted a MotoGP round since 2004. The track celebrated the first ever night-time Grand Prix in 2008 and continues to be the only night race on the calendar. The 5.4km track is well suited to the YZR-M1 with a fast flowing nature. With a main straight over a kilometre in length and a combination of medium and high-speed corners the track is guaranteed to provide an exciting spectacle to start the season. Unlike normal race weekends this weekend’s practice will be run from Thursday to Saturday, ensuring the riders get the optimum track conditions in the evening sessions.

“In February, we held a press conference in Malaysia to discuss Yamaha’s close relationship with motor sports. Indeed, racing is in Yamaha’s DNA. Racing is even embodied in our brand message, “Revs your Heart”. Like the thrill people feel when they hear engine revs rise, Yamaha strives to inspire people with exciting moments and great experiences based on unique Yamaha initiatives spanning many racing forums. One of our most important missions is to succeed in MotoGP, the pinnacle of motorcycle racing. We are now preparing for this year’s campaign, when we hope to capture the MotoGP championship. I am very pleased to announce that the Yamaha Factory MotoGP Team has entered a five-year partnership with Movistar, the Spanish mobile phone operator owned by Telefonica EspaÃ±a. From this year, they will race as the “Movistar Yamaha MotoGP” team. We are delighted to make this announcement, because we look forward to building a strong partnership with Movistar in MotoGP. Partnering with Movistar is a major step towards achieving our goals. With superstars Jorge Lorenzo and Valentino Rossi on board, we expect to enjoy many fine performances by Movistar Yamaha MotoGP, ultimately leading to the championship. With the racing season upon us, please look forward to big things from Yamaha!”

“Finally we can start the engines! The forthcoming championship is about to kick off and that sounds great after a long winter. As we were able to improve our performance at Phillip Island with the new tyres I feel quite confident for the very first race. I undertook three surgeries during the wintertime to take out some plates and metal pieces from the collarbone and the hand so I returned to full fitness quite late. In general I feel nearly at 100% and I guess in Qatar we won’t have any problems to push to the maximum. Concerning the track needless to say this is a good layout for both my Yamaha and me. I won here the past two races in a row and this is a circuit that suits in a good way the M1. The only thing we have to wait and see is the behaviour of the new tyres; especially on this surface; there is usually plenty of sand because it’s surround by the desert. The championship is going to be even tighter than last season was and at the beginning just MÃ¡rquez begins as the favorite contender. Afterwards I guess Dani or me are in a good position but also Valentino who is even hungrier than in 2013. Regarding Marc’s pace we should wait before saying anything about it. He is so strong and quick. Maybe he won’t start at a perfect level but I’m pretty sure he is going to be close to 100%. This 2014 season is going to be exciting and thrilling. I start in a very good position, filled with positive energy and optimism. The bike with the new changes is working really well and we solved the little problem of the engine, fixing the electronics in order to mitigate the aggressive behavior on the starts. Now it’s response is softer than at the beginning of the season in Malaysia and also we can count on a “complete” seamless gearbox, that is also a good news for us. I’m really looking forward to tomorrow, following the unveiling of the new Movistar Yamaha MotoGP livery. I love the new bike and the new colours. Posing with the new bike today has been the best incentive to kick-off the season!”

“I’m so happy because we are finally here at the start of the first race weekend of the year. We have worked very hard in the testing to make some of my issues from last year better and we have found some really good speed. I have been able to be very competitive and been with the fastest riders during testing. I’m very happy with the work done to my M1 over the winter that has helped me to be fast; we have a competitive bike to fight for the podium this weekend. I have a great feeling with the bike and I can’t wait to start the season tomorrow. Our competitors are also quite fast and so I think there are going to be some very exciting races. I am really looking forward to some great battles and fighting for the podium! When I received the news of the arrival of Movistar, I was very happy. It is a great thing to start the year with such a fantastic sponsorship announcement. We must all be very happy for that. Yamaha are very excited, and I am as well. I hope that Movistar will enjoy the journey with us this year and bring luck and podiums! Surely it is a greater incentive to do even better. As for the bike and the new livery, I like it a lot. It’s really nice, really “racing!”. We start the season in the best possible way, showing our fans a beautiful livery. Now we must do our best to collect good results on track!”

“This is one of the most exciting starts to a season that I can remember. This winter has been very intense behind the scenes. Our engineers have been working tirelessly to improve every aspect of the bike’s performance and our riders have been preparing themselves physically and mentally for this very important new season. Our management team have also been working non-stop to conclude all discussions and negotiations back in the office, and our Team staff and Marketing & Communications staff have been working frantically, burning the midnight oil to get the Team ready today with our new Movistar Yamaha MotoGP branding. It is great to welcome Movistar back in the world of MotoGP and I am delighted to have so many passionate sponsors and partners on board with us for this new campaign. We will do our maximum to get the results everybody craves for. We are ready, we are hungry and we are excited to go racing!”

“Our sponsorship of Yamaha’s MotoGP Team is an investment in Movistar’s relationship with the motoring world in general and MotoGP in particular. We want to contribute to the sport, and there is no better way to do it than by accompanying Yamaha and their two champions Jorge Lorenzo and Valentino Rossi on their journey. Being part of this team is one more milestone in Movistar’s global activity to support the development of the MotoGP World Championship, of which we are already part, thanks to the Movistar TV’s brand new channel, Movistar MotoGP. With exclusive contents from Wednesday to Sunday each GP week, and by offering a unique way of watching the championship to our audience, we are trying to support a sport with which we share DNA.”