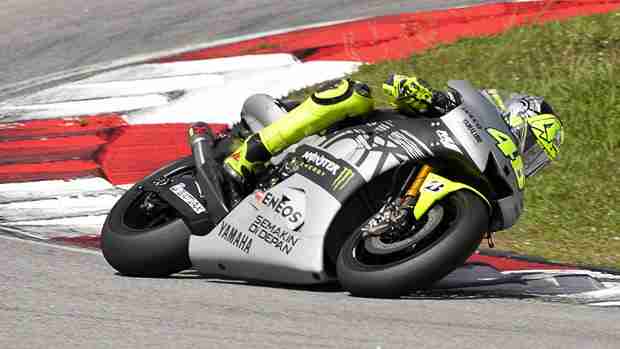 Yamaha Factory Racing were back in Malaysia today for the first day of the second official test of the 2013 season at the Sepang International Circuit. The riders were able to test throughout the morning but were then forced to call off the remainder of the day’s testing due to rain. Reigning World Champion Jorge Lorenzo was again quick to get up to pace, managing to complete a total of 25 laps before retiring for the day in second position, 0.235 seconds from first. The Mallorcan spent the day focusing on bike set up in the search for better acceleration from his YZR-M1.

Italian rider Valentino Rossi suffered a technical issue with the 2013 YZR-M1 early in the session however was able to continue testing with the 2012 machine to gather valuable data. Rossi completed the day’s riding in fifth position, less than half a second from first.

“Today we just tried to improve our current settings. We made some modifications but nothing special. We need to improve the acceleration a little bit but for the moment no new bits to try. The track was more slippery than the first test due to the rain which has left the tarmac in a worse condition.”

“The first day is not so bad, but we were unlucky because we had a small problem with the bike which had the new chassis so we had to stop and use the old bike. We made some tests with that using just one tyre and my pace and my lap times were not so bad. After we waited for the afternoon for the real work but the rain came so we decided to stop and continue tomorrow. If it rains again tomorrow we will do some laps in the wet conditions.”

“A good first test day here at Sepang, but quite short because of the rain. We reconfirmed all the parts we decided to use from the last test and also probably for the rest of the season. We will continue with them to find the best balance and settings. We are not finished yet and we need some more dry track time!”

“Unfortunately we started as we finished the last test, the rain came and interrupted our work. At the beginning of the day the track conditions were not great and by the time the circuit got better the storm had arrived. We couldn’t do a lot of our testing but our homework was not so much for today. Tomorrow should be fine to achieve the main objectives of the test so we can proceed on the final day with the long run to optimize the settings for the start of the season.”