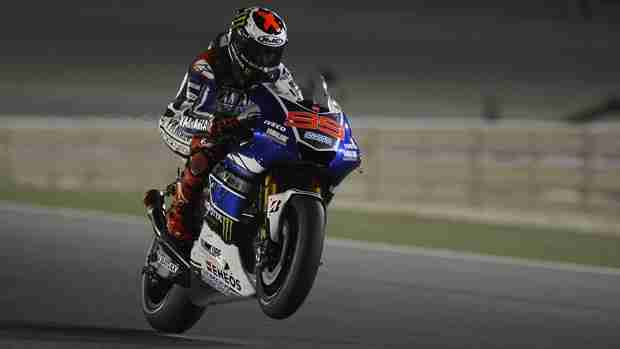 Reigning MotoGP World Champion Jorge Lorenzo became the first MotoGP rider to take pole position under the new qualifying format tonight at the Losail International Circuit for tomorrow’s Grand Prix of Qatar. The new quick-fire format allowing just 15 minutes for the riders to deliver their best lap proved an intense session. Lorenzo was quick to move to the top of the time sheets with a fast lap only to be relegated to third by rival Dani Pedrosa and then fellow Yamaha rider Cal Crutchlow. The Champion then responded with a stunning 1’54.714 second lap, over two tenths clear of Crutchlow in second to take his first pole of the season.

Having set a threatening pace over the practice sessions Valentino Rossi looked promising for a strong qualifying session. Unfortunately the Italian nine-time World Champion was held up in traffic on his second outing with a fresh tyre and was unable to make it to the front row for tomorrow’s race. Rossi will start his first Grand Prix back with Yamaha from the third row in seventh place.

“I’m really happy, for three or four laps we pushed to the limit. I knew Cal was really fast over one lap so I had to push to the maximum. I’m very happy with this pole position. The important thing is that the Yamaha works here at this track. I think for the first time of the new qualifying format it has been very positive and for the fans it is very good to watch. For the riders you are a little more nervous and you have less time to make a fast lap. I knew I was competitive but the ten minutes before the qualifying we had some problems with the set up of the bike so it was more difficult to make the time. We had to change to yesterday’s setting. The important thing is to make a good start tomorrow. The last simulations I made were better than yesterday so I’m quite confident for the start. If there are problems in the first laps we have to be patient and wait for the middle of the race.”

“The qualifying was not fantastic for us, especially as we lost the second row. Our performance during free practice was better than this, we’ll wait for tomorrow. Unfortunately in the qualifying session with the second tyre where we had to improve I was stuck in traffic so I could not improve my lap time and I lost some positions. For sure tomorrow it becomes more difficult to start from further behind but we have a good pace so we can be quite competitive.”

“The new qualifying system has been run for the first time and Jorge got the pole. It was very exciting I have to say. Everything is focused on just 15 minutes so you are more nervous than with an hour qualification. He did very well and was happy with his performance and with the bike also. We are looking forward to tomorrow’s race. There are three or four guys who are strong, but we will try to win the race and if not be on the podium! The first challenge is the start and we’ll see from there.”

“There’s no better way to start the season than with a pole. The lap that Jorge did was amazing. The pace he has is really good and I think we can be pretty optimistic for tomorrow. Unfortunately Vale had some traffic during his last tyre and that compromised his possibility to do two fast laps. He has to start from the third row but he is a fighter and what we have seen from the last two days means we know he can do well. We are ready for tomorrow.”