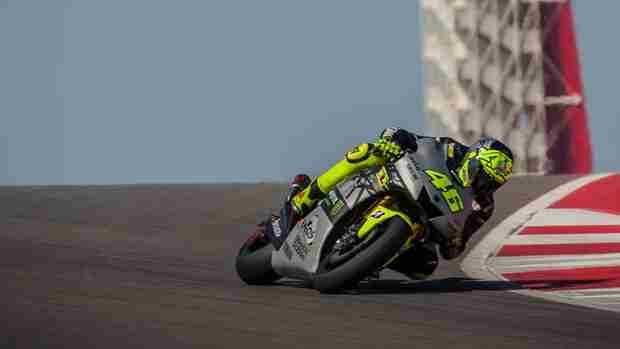 Yamaha Factory Racing will complete their testing activities today at the Circuit of the Americas track in Texas. Originally planned for a three-day test, riders Jorge Lorenzo and Valentino Rossi managed to provide all the data required over the first two days so will not continue tomorrow. Both Lorenzo and Rossi used the two days to work with their crews on set up to find the optimum performance from their YZR-M1s’ for the long and technical track. The two made big improvements from the first morning, shaving several seconds off their first times but were still looking for more grip at full lean. The Yamaha Factory Team will now re-join the rest of the MotoGP paddock back in Europe for the next Official IRTA test at the Jerez de la Frontera Circuit in Spain on the 23rd March.

“I feel better today, especially in the last run before the lunch break, we changed the set up of the bike and we improved some tenths so we are closer to the fastest riders, but not as much as we would like. We were too soft in the suspension to start with, we made it harder and in this track it works. These two days that we are here I think is enough to get a good idea of set up and riding style. The fans will like MotoGP here, it is going to be a great show. We have been trying different set ups of the bike, no new parts, just playing with the set up, changing the suspension and forks and in the last run I improved half a second with set up changes. We still don’t have enough grip on the rear so we can’t lean over with confidence which is why we are further behind than in Sepang. I am adapting my riding style every lap a little for the track. In the main straight we are at 340kmh/h which is an amazing speed; when you have to brake and put your helmet up the wind is very strong so it’s difficult to be stable.”

“The feeling with the track improved today, we started to work on the bike to improve the difficult points, especially in the three very hard braking areas where it is important to have good stability. It’s also very important to have grip on the edge through the hairpin to have speed along the straight. It looks like you can make a big difference in the slow parts here. The chicane part in turn two is very technical and difficult as it is blind; you have to go a bit with memory. Step by step we improved a lot from yesterday but have some disadvantage compared to the other guys so we need to put all the sections together. The target was to come here and try to understand the track and try to be ready for the race. Our competitors are able to accelerate faster than us from the hairpin and they have a bit more grip on the edge compared to us so these are the areas where we have to work, in the flowing parts we are not so bad.

The track is good, a very classical ‘Tilke’ track, I like the fast parts, turn two and turn ten especially. There is lots of hard braking and it is very wide so good for overtaking. The long right before the last two lefts is also good. It’s fun and not too hot like it is in Sepang so it’s a good place to make a motorcycle race.”

“First of all I would like to remark that it has been a good idea to come here. Yesterday we were able to download a lot of data from both riders, that has permitted us to find a much better set up. Today the results we got are quite promising and we are leaving Austin with a lot of useful data. We are expecting different conditions for the race but the test has been successful. We are now looking forward to the Jerez test which is important as we will decide there how to start for the season.

The test here was organized by Honda to cover three days but we knew from the beginning that two days would be enough for us. The target was to allow the rider to get used to the circuit and get as much data as possible for our Japanese engineers.”