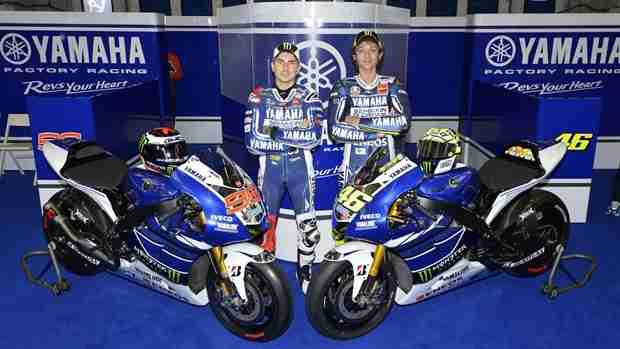 Yamaha Factory Racing has launched their 2013 colours this afternoon in front of the world’s MotoGP Media at the Jerez de La Frontera Circuit in Spain. Reigning MotoGP World Champion Jorge Lorenzo and returning team mate Valentino Rossi were on-hand to reveal their 2013 liveries in the Yamaha Factory Racing pit garage before joining a press conference with some of Yamaha’s top management to answer questions for the media.

The 2013 Yamaha livery seems very familiar and reminds you of a time when both these riders where together. Nothing too loud for Rossi, which is surprising, probably a good thing. Yamaha is the last team to reveal their 2013 MotoGP livery and this just couple of weeks before the season opener at Losail, Qatar. A lot of eyes for sure will be on the returning man, Valentino Rossi, but he is coming back to a very competitive top grid that consists of a very consistent Jorge Lorenzo, a very elegant Dani Pedrosa and the new boy in town who is already up there with the best, Marc Marquez. But the thing about Rossi is that until the chequered flag goes down nothing can be said for sure and this is what everybody out there is looking forward to. Here is to a great season of up’s and down’s with twists and turns and hopefully we will see a championship that goes down to the wire, to the last lap of the last race.