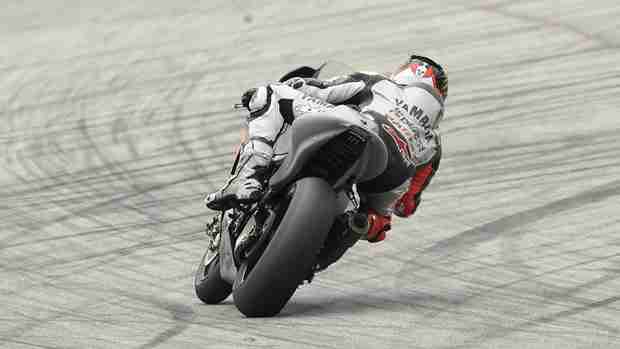 Reigning MotoGP World Champion Jorge Lorenzo topped the time sheets today for day two of the second official IRTA test at the Sepang International Circuit in Malaysia. Lorenzo was fast straight out of the box in the morning and remained unchallenged all day. Track conditions had improved from yesterday’s first run, allowing the champion to get down to a lap time of 2’00.282, nearly 1.5 seconds faster than yesterday’s quickest time set by Dani Pedrosa.

Lorenzo’s teammate Valentino Rossi’s start to the day was delayed slightly whilst the team resolved a small electrical issue with a coil. The Italian was soon out on track, putting in an impressive 63 laps whilst working on improving the YZR-M1’s traction on worn tyres. Rossi completed the day in fifth position, over a second faster than yesterday’s time.

“A pretty good day, the track was much better than yesterday, I was surprised in the beginning it was so different. I could be strong from the start; a second and a half quicker and I think I beat my record time here in Malaysia. We improved the setting on the bike and I feel stronger than the first Sepang test so I’m quite satisfied. Tomorrow if the weather is good I would like to try a long run of maybe 24 laps to see what happens with the tyres.”

“I’m happy, the feeling is quite good. Today was a very long day; I did more than sixty laps because we had a lot of work to do. We lost some time this morning with a small electrical problem that we fixed. We continued to work to increase the rear grip and traction, especially when the tyre has a lot of laps on it. We found something but we are still not 100% happy as we lose a little balance of the bike. Tomorrow the target is to improve the traction without losing the balance and then the bike will be very good.”

“The second day of testing went pretty smoothly I have to say, we didn’t have any issues. We tested many different configurations of the bike again. We went a lot faster than yesterday but the track has improved as well. Having said that, whatever the conditions we have been consistently fast which is important. Overall it’s been very positive so far.”

“A good day today, we managed many laps. We found some interesting data and the direction is definitely there. Unfortunately we lost some time this morning with Vale with a little issue with a coil but everything was back on track quickly. We are on target to finalise everything tomorrow and do a long run which will be the last point in our schedule for this test.”