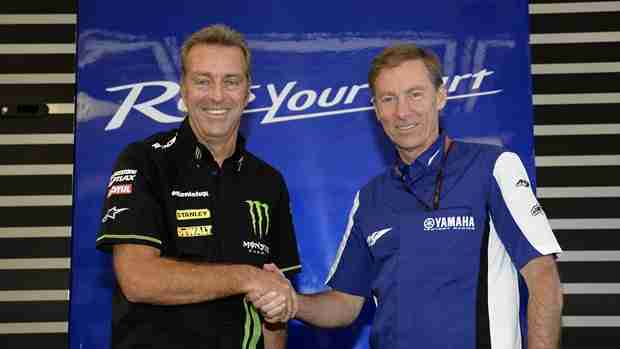 The French-based Tech 3 Team has reached an agreement to extend its successful partnership with Yamaha for the 2014 and 2015 MotoGP World Championship. The new two-year agreement will see the Monster Yamaha Tech 3 Team race prototype YZR-M1 1000cc machinery and continues a close collaboration first formed more than a decade ago. Since the start of its partnership back in 1999 in the 250cc category, Herve Poncharal’s Monster-backed Tech 3 Team has become an integral part of Yamaha’s MotoGP project and is now firmly established as the leading independent team in the competitive premier class.

After 12 races of the current campaign, the Monster Yamaha Tech 3 Team sits proudly in third position in the Team World Championship rankings, thanks to four podium finishes from the outstanding Cal Crutchlow and Bradley Smith’s impressive string of consistent top 10 results in his rookie campaign. With Yamaha’s continued commitment to giving its maximum support to the Monster Yamaha Tech 3 squad, the team is now looking forward to demonstrating the high level of the YZR-M1 package, while also working closely with the Japanese manufacturer to nurture young talent for the future. The Monster Yamaha Tech 3 Team will compete in 2014 with British rider Bradley Smith and highly regarded Spanish talent Pol Espargaro.

“I’m very happy and proud to announce that Tech3 is going to be for the next two years again working and supported by the Yamaha Motor Company. It is an honour and a privilege. We have been working with Yamaha since 1999 in the 250 class with Olivier Jacque and Shinya Nakano and in 2000 we won the 250 championship. Next season we switched to the premier class and since then we have enjoyed a great collaboration and a great relationship. It is not only a technical partnership but we feel truly part of the Yamaha family. Next year is a new adventure having two young riders; Bradley Smith will be entering his second MotoGP season and will be joined by Pol EspargarÃ³ so we are very excited. I believe this is going to be a great set up not only together with Yamaha, but with our sponsors too and that is something we are pretty proud of.”

I’m really very happy to continue our relationship with HervÃ© Poncharal and the entire Tech3 Team. We have enjoyed a very successful partnership for more than a decade and have shared many memorable moments over the years. The Monster Yamaha Tech3 Team continues to perform as the top ranking satellite Team in the MotoGP class and their riders are frequently scoring excellent results and providing great excitement for the MotoGP fans. Now that we share Monster Energy as a common sponsor our link is even closer and we are very keen to continue to work together closely for the future to develop young talent which is a very important part of our total Yamaha Factory Racing program.”